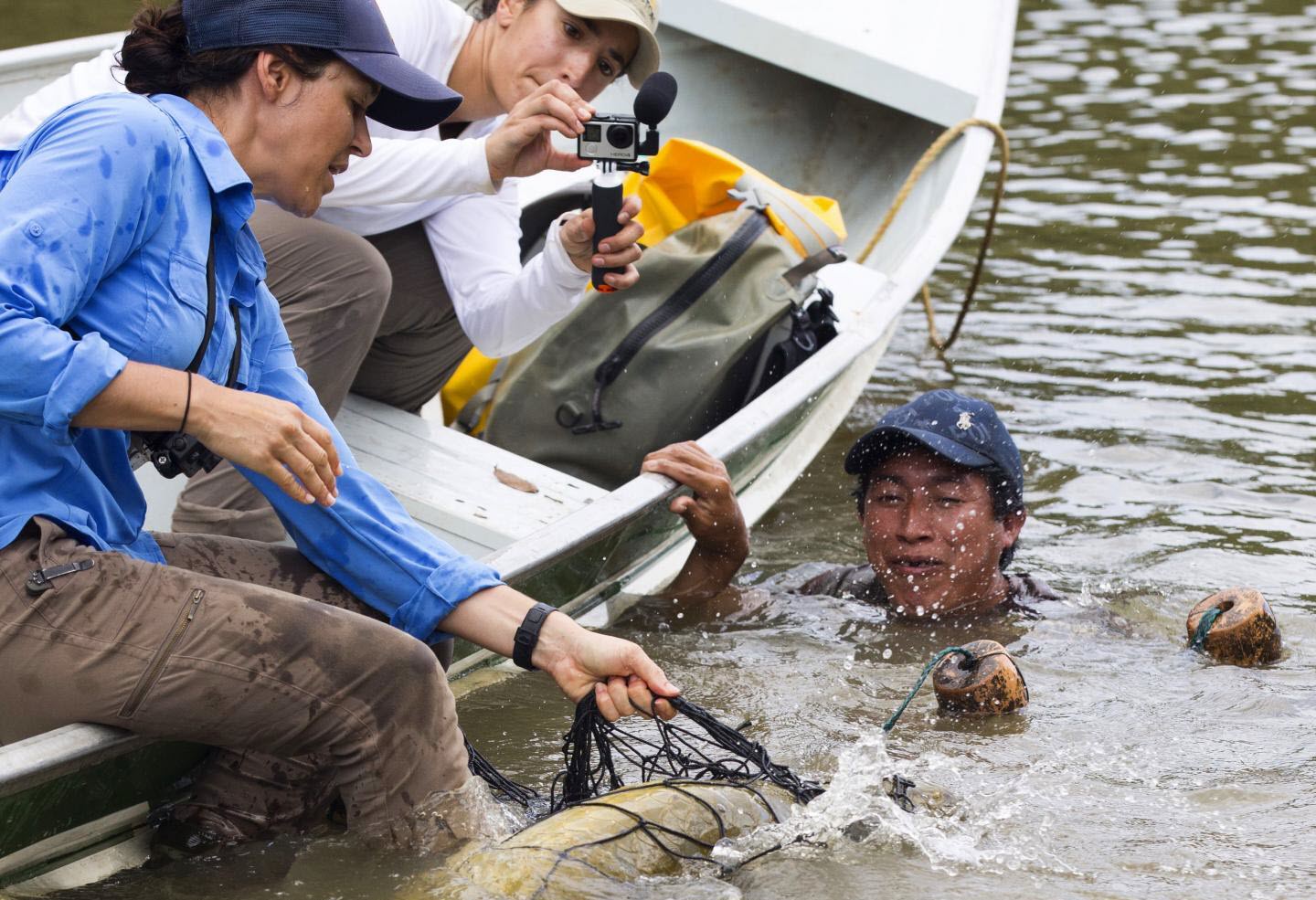 Lesley de Souza bringing in an Arapaima she and her team collected with a gill net in the Rupununi.
Courtesy of Lesley de Souza, Field Museum

Think of the Amazon, and you probably think of jaguars, monkeys, or parrots. But many of the rainforest's secrets can be found hidden in its watery depths, from the fish swimming around its rivers and lakes And because these animals live in a river network that spans the South American continent, studying them helps conservationists understand why connected ecosystems are healthy ecosystems. Scientists from the Field Museum investigated fish populations in the South American country of Guyana, which helped to show why aquatic corridors matter in conservation.Their study, which they published in Frontiers in Forests and Global Change, makes an important case that protecting one tiny corner of the Guiana Shield can help protect rivers and biodiversity across the Amazon.

"I want to make a case for why this area should be protected, and I can tell that story using fish," says Dr. Lesley de Souza, conservation ecologist at the Field Museum. "We found over 450 species of fish in an area smaller than Connecticut. The entire Mississippi River basin has fewer than 200 species. We're talking about a pretty small area that has a ton of diversity."

In this study, de Souza focused on the lakes, rivers, and streams in the Rupununi region of central Guyana in northeastern South America. The area is inspiration for Pixar's balloon adventure, Up. For this study, De Souza traversed the same rocky outcroppings, breathtaking waterfalls, and lush jungles as the movie's characters, looking for fish. "We made several expeditions to the region and collected fish in a variety of habitats to better understand where they live, and further assess the habitats' conservation value, de Souza says. "We were taking fish out of rocks and caves, fish that live in woody debris in the water, sticking our hands in holes and hollow logs and finding fish. Anywhere there might be a fish, we checked." 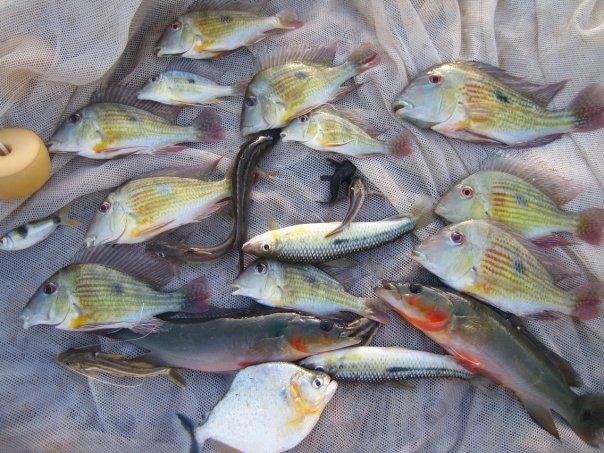 A sample of the colorful variety of fishes in the Rupununi from cichlids to catfishes.
Courtesy of Lesley de Souza, Field Museum

What de Souza's team found was a wild variety of underwater life. They collected fish that looked like little silver knives. They pulled up their nets and found fish camouflaged as dead leaves. They found Arapaima, a ten-foot-long fish that gulps air at the water's surface in addition to breathing underwater with gills. Her team brought their specimens back to natural history museums (including the Field Museum) and completed the arduous task of identifying each one. The scientists then analyzed the fishes' habitats, and realized that the incredible diversity emerged from the unique environments of the Rupununi Portal.

De Souza calls this region a "portal" because when river levels rise in the rainy season, two river systems that remain separate during the rest of the year are connected by floodwaters, and fish can travel from the Guiana Shield to the heart of the Amazon. As the water recedes, the savannas and wetlands reemerge and the fish separate into their respective river systems again—until the next rainy season.

Conservation programs often overlook freshwater environments, focusing on land habitats instead. If you visited the dry Rupununi savannas outside of rainy season, you'd likely make the same mistake. De Souza's analysis helps show how conservation requires healthy watersheds, too—especially connected ones. "As the water goes up and down," de Souza explains, "the Rupununi acts like a heartbeat that pumps this incredible fish diversity throughout the country. If we don't protect it, that heartbeat stops." Better information about the fish species living in the area can provide evidence for why it needs to be protected. 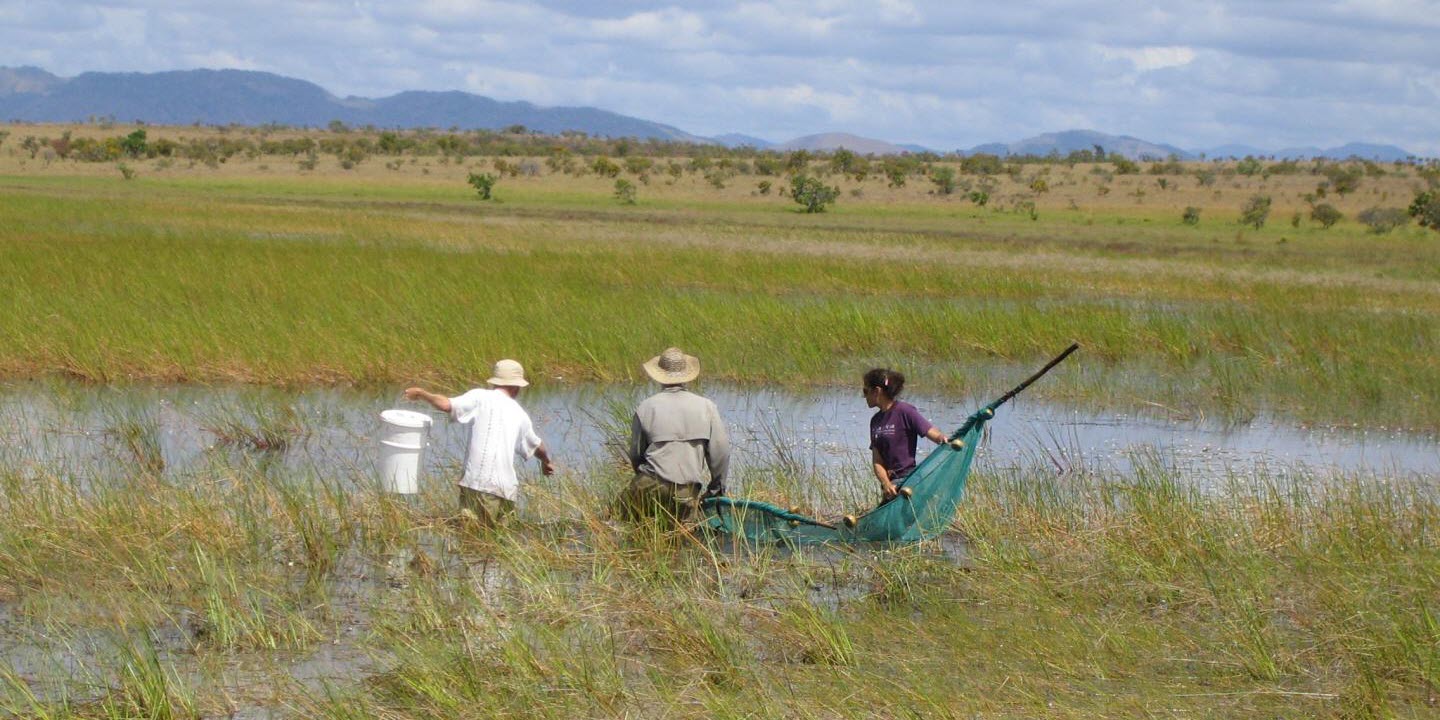 Lesley de Souza with her team seining for fishes in the Rupununi savannas during the dry season.
Courtesy of Lesley de Souza, Field Museum

And by protecting the lakes and rivers where the fish live, we can help the planet overall. The forests growing around these bodies of water are crucial in absorbing the carbon emissions that have created climate change. Conserving the Rupununi portal will yield long-term benefits for the entire planet.

Conserving the Rupununi portal will yield long-term benefits for the entire Amazon, but de Souza emphasizes the immediate local need for protection. "I focus on fish in this area because they're so important for the people," de Souza says. "Indigenous communities are the primary inhabitants of this region, and they are intimately connected to the forest, the savanna, and the wetlands. Their primary source of protein is fish. In order to maintain fish reproductive cycles and people's livelihoods, the entire system needs to stay intact."

Through this research, de Souza's team discovered a previously unknown portal farther south of the Rupununi portal. De Souza is excited to see what else researchers might discover there: "I have always been intrigued by the mystery of what is below the surface. Fish communities are an indicator of forest health, and they can tell us things we just can't learn on land."