Nanoparticles cloaked in human lung cell membranes and human immune cell membranes can attract and neutralize the SARS-CoV-2 virus in cell culture, causing the virus to lose its ability to hijack host cells and reproduce. The UC San Diego researchers call their nano-scale particles "nanosponges" because they soak up harmful pathogens and toxins.
David Baillot, University of California San Diego

Nanoparticles cloaked in human lung cell membranes and human immune cell membranes can attract and neutralize the SARS-CoV-2 virus in cell culture, causing the virus to lose its ability to hijack host cells and reproduce.

The first data describing this new direction for fighting COVID-19 were published on June 17 in the journal Nano Letters. The "nanosponges" were developed by engineers at the University of California San Diego and tested by researchers at Boston University.

The UC San Diego researchers call their nano-scale particles "nanosponges" because they soak up harmful pathogens and toxins.

In lab experiments, both the lung cell and immune cell types of nanosponges caused the SARS-CoV-2 virus to lose nearly 90 percent of its "viral infectivity" in a dose-dependent manner. Viral infectivity is a measure of the ability of the virus to enter the host cell and exploit its resources to replicate and produce additional infectious viral particles.

Instead of targeting the virus itself, these nanosponges are designed to protect the healthy cells the virus invades.

"Traditionally, drug developers for infectious diseases dive deep on the details of the pathogen in order to find druggable targets. Our approach is different. We only need to know what the target cells are. And then we aim to protect the targets by creating biomimetic decoys," said Liangfang Zhang, a nanoengineering professor at the UC San Diego Jacobs School of Engineering.

His lab first created this biomimetic nanosponge platform more than a decade ago and has been developing it for a wide range of applications ever since. When the novel coronavirus appeared, the idea of using the nanosponge platform to fight it came to Zhang "almost immediately," he said.

In addition to the encouraging data on neutralizing the virus in cell culture, the researchers note that nanosponges cloaked with fragments of the outer membranes of macrophages could have an added benefit: soaking up inflammatory cytokine proteins, which are implicated in some of the most dangerous aspects of COVID-19 and are driven by immune response to the infection. 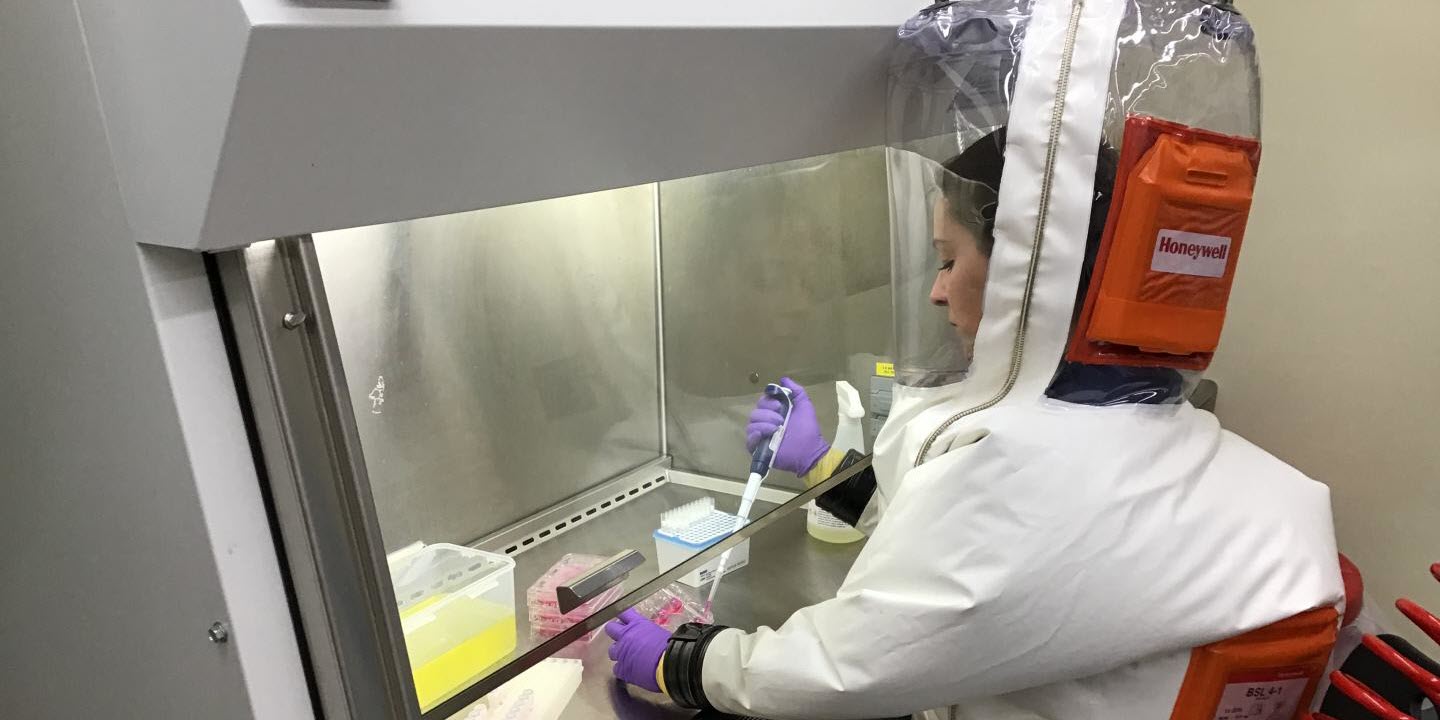 Each COVID-19 nanosponge—a thousand times smaller than the width of a human hair—consists of a polymer core coated in cell membranes extracted from either lung epithelial type II cells or macrophage cells. The membranes cover the sponges with all the same protein receptors as the cells they impersonate—and this inherently includes whatever receptors SARS-CoV-2 uses to enter cells in the body.

The researchers prepared several different concentrations of nanosponges in solution to test against the novel coronavirus. To test the ability of the nanosponges to block SARS-CoV-2 infectivity, the UC San Diego researchers turned to a team at Boston University's National Emerging Infectious Diseases Laboratories (NEIDL) to perform independent tests. In this BSL-4 lab—the highest biosafety level for a research facility—the researchers, led by Anthony Griffiths, associate professor of microbiology at Boston University School of Medicine, tested the ability of various concentrations of each nanosponge type to reduce the infectivity of live SARS-CoV-2 virus—the same strains that are being tested in other COVID-19 therapeutic and vaccine research.

"From the perspective of an immunologist and virologist, the nanosponge platform was immediately appealing as a potential antiviral because of its ability to work against viruses of any kind. This means that as opposed to a drug or antibody that might very specifically block SARS-CoV-2 infection or replication, these cell membrane nanosponges might function in a more holistic manner in treating a broad spectrum of viral infectious diseases. I was optimistically skeptical initially that it would work, and then thrilled once I saw the results and it sunk in what this could mean for therapeutic development as a whole," said Anna Honko, a co-first author on the paper and a Research Associate Professor, Microbiology at Boston University's National Emerging Infectious Diseases Laboratories (NEIDL).

In the next few months, the UC San Diego researchers and collaborators will evaluate the nanosponges' efficacy in animal models. The UC San Diego team has already shown short-term safety in the respiratory tracts and lungs of mice. If and when these COVID-19 nanosponges will be tested in humans depends on a variety of factors, but the researchers are moving as fast as possible.

"Another interesting aspect of our approach is that even as SARS-CoV-2 mutates, as long as the virus can still invade the cells we are mimicking, our nanosponge approach should still work. I'm not sure this can be said for some of the vaccines and therapeutics that are currently being developed," said Zhang.

The researchers also expect these nanosponges would work against any new coronavirus or even other respiratory viruses, including whatever virus might trigger the next respiratory pandemic. 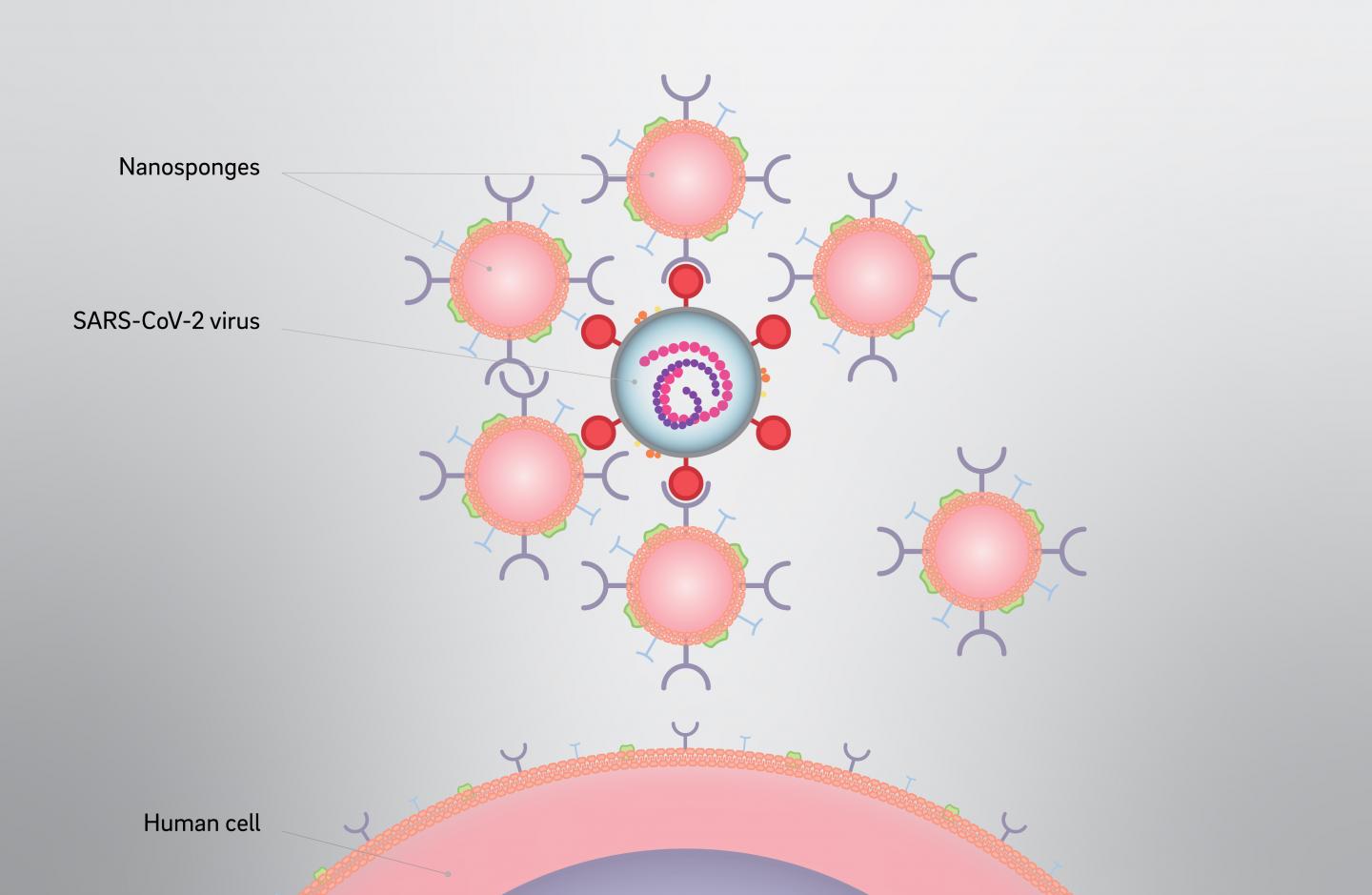 In lab experiments, both the lung cell and immune cell types of nanosponges caused the SARS-CoV-2 virus to lose nearly 90 percent of its "viral infectivity" in a dose-dependent manner. Viral infectivity is a measure of the ability of the virus to enter the host cell and exploit its resources to replicate and produce additional infectious viral particles.
David Baillot, University of California San Diego

Since the novel coronavirus often infects lung epithelial cells as the first step in COVID-19 infection, Zhang and his colleagues reasoned that it would make sense to cloak a nanoparticle in fragments of the outer membranes of lung epithelial cells to see if the virus could be tricked into latching on it instead of a lung cell.

Macrophages, which are white blood cells that play a major role in inflammation, also are very active in the lung during the course of a COVID-19 illness, so Zhang and colleagues created a second sponge cloaked in macrophage membrane.

The research team plans to study whether the macrophage sponges also have the ability to quiet cytokine storms in COVID-19 patients.

In a paper published in 2017 in Proceedings of the National Academy of Sciences, Zhang and a team of researchers at UC San Diego showed that macrophage nanosponges can safely neutralize both endotoxins and pro-inflammatory cytokines in the bloodstream of mice. A San Diego biotechnology company co-founded by Zhang called Cellics Therapeutics is working to translate this macrophage nanosponge work into the clinic.

A potential COVID-19 therapeutic The COVID-19 nanosponge platform has significant testing ahead of it before scientists know whether it would be a safe and effective therapy against the virus in humans, Zhang cautioned. But if the sponges reach the clinical trial stage, there are multiple potential ways of delivering the therapy that include direct delivery into the lung for intubated patients, via an inhaler like for asthmatic patients, or intravenously, especially to treat the complication of cytokine storm.

A therapeutic dose of nanosponges might flood the lung with a trillion or more tiny nanosponges that could draw the virus away from healthy cells. Once the virus binds with a sponge, "it loses its viability and is not infective anymore, and will be taken up by our own immune cells and digested," said Zhang.

"I see potential for a preventive treatment, for a therapeutic that could be given early because once the nanosponges get in the lung, they can stay in the lung for some time," Zhang said. "If a virus comes, it could be blocked if there are nanosponges waiting for it."

Zhang's lab at UC San Diego created the first membrane-cloaked nanoparticles over a decade ago. The first of these nanosponges were cloaked with fragments of red blood cell membranes. These nanosponges are being developed to treat bacterial pneumonia and have undergone all stages of pre-clinical testing by Cellics Therapeutics, the San Diego startup cofounded by Zhang. The company is currently in the process of submitting the investigational new drug (IND) application to the FDA for their lead candidate: red blood cell nanosponges for the treatment of methicillin-resistant staphylococcus aureus (MRSA) pneumonia. The company estimates the first patients in a clinical trial will be dosed next year.

The UC San Diego researchers have also shown that nanosponges can deliver drugs to a wound site; sop up bacterial toxins that trigger sepsis; and intercept HIV before it can infect human T cells.

The basic construction for each of these nanosponges is the same: a biodegradable, FDA-approved polymer core is coated in a specific type of cell membrane, so that it might be disguised as a red blood cell, or an immune T cell or a platelet cell. The cloaking keeps the immune system from spotting and attacking the particles as dangerous invaders.

"I think of the cell membrane fragments as the active ingredients. This is a different way of looking at drug development," said Zhang. "For COVID-19, I hope other teams come up with safe and effective therapies and vaccines as soon as possible. At the same time, we are working and planning as if the world is counting on us."