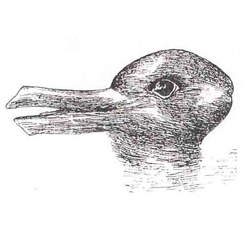 Is it a duck or a rabbit? The same sensory stimulus can produce different perceptions.Image credit: Jastrow, J. (1899). The mind's eye. Popular Science Monthly, 54, 299-312.Scientists have long known that when sounds are faint or objects are seen through fog in the distance, repetition of these weak or ambiguous sensory “inputs” can result in different perceptions inside the same brain. Now the results of new research, described online Dec. 7 in the journal Nature Neuroscience, have identified brain processes in mice that may help explain how those differences happen.

“In everyday life, we experience weak stimuli all the time,” says senior researcher Daniel O’Connor, PhD, assistant professor of neuroscience at the Johns Hopkins University School of Medicine. “Did I hear my name being called? Do you smell smoke? Is that an oasis up ahead or a mirage? When the brain receives weak information through the senses, it can interpret that information in multiple ways, and we wanted to understand what determines the resulting perception.”

To find out, O’Connor and his team used a simple model: the gentle tickling of a single mouse whisker, a sensory organ common to many animals. “The stimulation is faint enough that sometimes the mice perceive it, and sometimes they don’t,” explains O’Connor. “Why is that?”

To get at the answer, the researchers had to train the mice to indicate when they felt tickled. First, they positioned the mice close to a waterspout. After they tickled a whisker, they gave the mouse a “reward,” a bit of water from the spout. If they didn’t tickle a whisker, no water. So the mice learned to only lick the spout after perceiving a whisker tickle.

Using high-resolution microscopy with an engineered protein that fluoresces when a nerve cell is active, O’Connor’s team members monitored the activity of hundreds of neurons in the part of the brain responsible for feeling touch. They then paired that data with the animals’ licking responses. Studies in primates already had shown that activity in the primary sensory areas of the brain’s cerebral cortex lines up with perception, and they found this to be true in the mice too. When the mice correctly perceived a tickle and licked the spout (“hits”), there were higher levels of activity in the cortex than when they didn’t perceive a tickle (“misses”).

“The cortex’s response to exactly the same stimulus wasn’t always the same, but it correlated with the animals’ licking,” says O’Connor.

So why the difference in response when the stimulation is the same? The researchers began searching for that answer by monitoring the activity of the neurons that connect to individual whiskers. Those neurons turned out to respond equally to all tickles, whether the mice perceived them or not.

After those first neurons fire in response to a tickle, however, the signal travels to the brainstem and then on to another part of the brain, the thalamus. So the research team repeated its activity monitoring there and saw a small, brief increase in neuron activity strength during the hit trials. The team thought the response seemed too small and brief to be responsible for the larger, longer hit signals seen in the cortex, though.

To get a clearer picture of the relationship between the two signaling patterns, the scientists used a beam of light to artificially enhance the signals sent from the thalamus to the cortex, but even strong light produced only weak activity peaks in the cortex and didn’t help the mice perceive whisker tickles.

Finally, they returned to the cortex to look for the cause of the variability. Their previous experiments had focused on the primary sensory area of the cortex (S1). Deeper into the brain, however, is another set of neurons involved in “higher” aspects of perception, cognition and memory (S2). When the scientists monitored activity sent “backward” from these S2 neurons to those in S1, they saw patterns that did indeed predict and align with an animal’s perception.

“That implies,” says O’Connor, “that the activity in S1 is being shaped by S2, a finding that adds cellular details to our understanding from psychology that what we perceive is not a fixed thing based only on sensory input but is influenced by our prior experiences and the current state of our brain.”

O’Connor says far more research is needed to determine what precisely accounts for the differences in S2 signaling. He expects that a “host” of factors will be identified, including memories and what the brain is paying attention to.

Other authors of the report include Hongdian Yang, Sung Kwon and Kyle Severson of the Johns Hopkins University School of Medicine.

This work was supported by grants from the Whitehall Foundation, Klingenstein Fund, and the National Institutes of Neurological Disorders and Stroke (R01NS089652, P30NS050274).