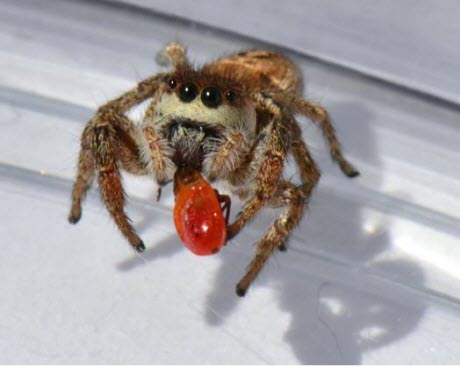 Researchers found that Habronattus pyrrithrix, a species of jumping spiders, could be trained to prefer or avoid red.Photo courtesy of the University of Florida Institute of Food and Agricultural SciencesGAINESVILLE, Fla. — Jumping spiders, voracious predators that eat pests around the world, can learn to distinguish the color red in their prey, thus allowing them to avoid toxicity in what they consume, according to new research led by a UF/IFAS scientist.

That means they can stay alive longer and eat pests ranging from caterpillars to beetles to flies, many of which damage agricultural products, said Lisa Taylor, an assistant research scientist in entomology at the University of Florida Institute of Food and Agricultural Sciences.

Because jumping spiders consume most small agricultural pests, growers can avoid using some chemical treatments on their crops.

Jumping spiders are fairly ubiquitous: More than 5,000 species are found on every continent except Antarctica, Taylor said.

In a new study in the journal Behavioral Ecology, Taylor and her colleagues from the University of Pittsburgh found that Habronattus pyrrithrix, a species of jumping spiders, could be trained to prefer or avoid red. That’s important because many pests emit that color to signal toxicity, Taylor said.

“We show that they are able to learn to associate the color red with toxic prey–and avoid it–or to associate red with high-quality prey and seek it out,” Taylor said. “One reason this is important is that is helps us understand how these spiders might interact with a new type of prey that appears in their environment.”

For example, scientists previously assumed that because these spiders have small brains, they would have an innate aversion to the color red and therefore avoid toxicity, Taylor said. If this were the case, then spiders would avoid a new species of red insect that appeared in an area where the spiders live–for instance a farm or ranch–even if that insect was not toxic. This means that the spiders would miss out on eating non-toxic red prey, such as red blood-filled mosquitoes.

“This study shows that the spiders will test out new prey and quickly learn and remember the colors associated with them,” she said. “This helps the jumping spider survive because they can make more informed choices about what to eat. For humans, it’s good because it means that spiders can respond to changes in prey communities and be more effective biological control agents.”