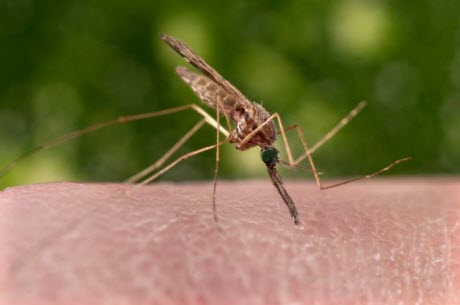 A female Anopheles sinensis mosquito lands on a human hand. This mosquito is a known vector for the parasitic disease malaria.Photo credit: CDC/James Gathany, 2014Drexel University scientists have discovered an unusual mechanism for how two new antimalarial drugs operate: They give the parasite’s skin a boost in cholesterol, making it unable to traverse the narrow labyrinths of the human bloodstream. The drugs also seem to trick the parasite into reproducing prematurely.

Malaria is a mosquito-borne disease caused by Plasmodium parasites. After a person is bitten, the parasite invades the victim’s red blood cells. There, it eventually divides into daughter parasites, which continue to destroy each red blood cell they infect.

There are several drugs under development that interrupt this lifecycle, including a class of compounds discovered in 2014 by Akhil Vaidya, PhD, a professor at Drexel University College of Medicine. In their 2014 study, Vaidya and his research team found that these drugs increase levels of sodium within the parasites’ cells, causing them to swell and erupt.

However, in a new study, published recently in PLOS Pathogens, the researchers have revealed that this sodium increase actually triggers a more complex cascade of events, eventually changing the parasite’s outer membrane and also tricking it into early reproduction, which renders the parasite inert. 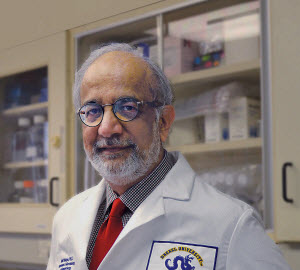 Akhil Vaidya, PhDPhoto courtesy of Drexel University“Nobody suspected something like this to be the mode of action,” said Vaidya, who also directs Drexel’s Center for Molecular Parasitology. “The mechanism is a lot more complicated and interesting than we originally thought.”

In this study, the scientists focused on two small-molecule drugs, one of which is undergoing clinical trials. Despite very different molecular structures, both drugs initially increase sodium within the parasite and subsequently kill the pathogen.

Until now, scientists have not understood why the increase in sodium concentration leads to the malaria parasite’s demise.

To explore this question, the researchers first tested the properties of the Plasmodium plasma membrane—or the parasite’s outer skin—before and after exposure to antimalarial drugs. The Plasmodium membrane is unusual, because it contains very low levels of cholesterol, a major lipid component of most other membranes, including those of human red blood cells.

The Drexel scientists hypothesized that the low cholesterol content permits greater flexibility for the parasite to travel through the human bloodstream and to withstand the stress of blood circulation. They propose that the sodium increase, caused by the antimalarial drugs, somehow interferes with that elasticity.

The researchers used a cholesterol-dependent detergent to detect the presence of lipids in the parasite membrane. They found that indeed both drug treatments appeared to add a significant amount of cholesterol to the Plasmodium plasma membrane.

“We believe that the cholesterol makes the parasite rigid, and then the parasite can no longer pass through very small spaces in the bloodstream,” Vaidya said, adding that the parasite cannot continue its lifecycle if it cannot enter red blood cells.

Just two hours after treatment, the scientists also saw that many of the parasites showed fragmented nuclei and interior membranes, which are the precursors to cell division. But these changes happened without any sign that the parasite’s genome had multiplied—a step that is necessary for a cell to divide and survive.

The researchers hypothesize that sodium influx is a normal step during the malaria parasite’s division. The antimalarial drugs prematurely induce this signaling event, and the parasite begins dividing before it should. 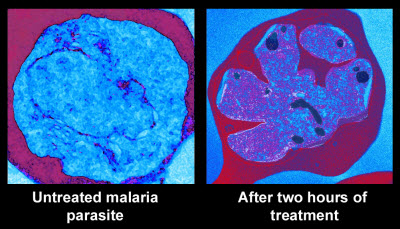 After two-hour exposure to new antimalarial drugs, the parasite experienced physical changes resembling premature division.EM by Isabelle Coppens pseudo-colored by Avinash Vaidya“The parasite is not ready to divide yet, so it can not survive. It is like premature delivery of an infant,” Vaidya said. “This whole cascade of events is triggered by these drug treatments.”

Malaria is the world’s deadliest parasitic disease. It kills more than 300,000 people per year, according to the World Health Organization, and affects up to 300 million.

One of the biggest challenges for treating malaria is drug resistance. The drugs that are currently available are quickly losing their potency, so researchers are scrambling to develop stronger treatments.

By understanding exactly how new drug candidates stop malaria, Vaidya and his team aim to reveal more about the parasite’s vulnerabilities. This, they hope, will eventually lead to the creation of more effective drugs against the disease. Vaidya noted that the best defense against malaria will always be a combination of treatments.

“We want to find the best ways to keep new drugs effective as long as we can,” Vaidya said.