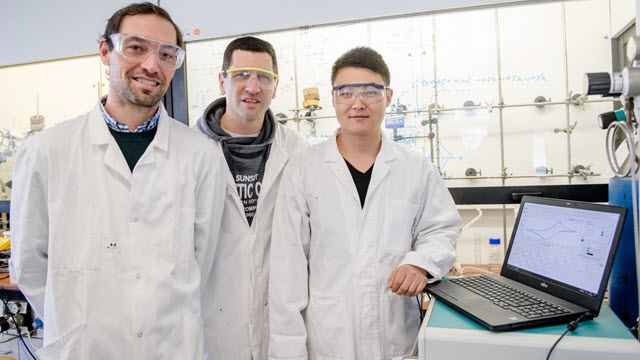 Efficient catalysts for converting hydrogen into electricity in fuel cells for the energy transition are often based on expensive, rare metals such as platinum. The use of cheaper metals and biological components that work just as efficiently has so far shortened the service life of catalysts as they are sensitive to oxygen. A research team from Bochum and Marseille has succeeded in integrating such a catalyst within an extremely thin protective film of molecular building blocks that shields it from oxygen and thus makes its service life practically infinite while maintaining its ability to work efficiently. The team reports in the Journal of the American Chemical Society on September 16, 2019.

The researchers led by professor Nicolas Plumeré from the Ruhr Explores Solvation (Resolv) Cluster of Excellence at Ruhr-Universität Bochum (RUB) worked on this study together with Dr. Vincent Fourmond and Dr. Christophe Léger from the Centre national de la recherche scientifique Marseille.

Thick layers are no good in practice

The teams have been working for some time on making efficient biocatalysts containing oxygen-sensitive hydrogenases last longer. "We developed a self-defence mechanism based on a conductive polymer film about five years ago," explains Nicolas Plumeré. The electrons produced during the oxidation of hydrogen are transported through the film and react with oxygen, which is thus removed before it can reach the inside of the catalyst, where oxygen-sensitive enzymes are located. "However, it was not possible to use the catalysts in practice," says the researcher. "At over 100 micrometers, the polymer films were so thick that they hampered efficiency."

In the current work, the researchers show that, even in a much thinner polymer film, the hydrogenases are safe from oxygen. "Surprisingly, these films, which are only a few micrometers thick, are even more robust than the thicker ones," says Nicolas Plumeré. 50 per cent of the catalyst now contributes to catalysis—the figure was only 0.3 per cent for thicker protective films.

The building blocks that make up the protective film are at the core of the new development. For this, the researchers use tiny spheres with a diameter of just five nanometres, all of which have an identical structure, known as dendrimers. This allowed them to precisely control the thickness of the resulting layer.

The dendrimers can transport electrons more efficiently than the polymers used previously. "This increased conductivity means that the electrons move more quickly through the film and are able to stop oxygen at a greater distance away from the catalyst," explains Plumeré.

The researchers were surprised to observe that the thickness of the protective film has a significant effect on the service life of the catalyst: In a film three micrometers thick, a catalyst survives in the presence of oxygen for only around 10 minutes. If the film is six micrometers thick, the service life can be extended to up to one year under the same conditions. "A further two micrometers in thickness theoretically extend the life of the catalyst to 22,000 years," say the researchers, amazed.

The team was equally surprised that the protective film not only keeps harmful oxygen molecules away, but is even capable of reactivating a catalyst that is no longer functional by supplying it with electrons from a neighbouring active catalyst. "In other words: Catalysts in this protective film not only protect themselves, but also each other," summarises Plumeré. This property also enables catalysts to have an infinite life in protective layers that are just three micrometers thick.

"This extreme longevity brings us another step closer to using such oxygen-sensitive biocatalysts in fuel cells," says the research team.