Olive trees are some of the most important woody crops in the world and Verticillium wilt, caused by the Verticillium dahliae fungus, is the most concerning disease for farmers in the olive sector.

In Spain, the leader in olive oil and table olive production, the increase in Verticillium wilt is primarily due to taking over infested soils formerly used for cotton (one of the main hosts for this pathogen) and the spread of a defoliating variant of the pathogen, which is more ferocious and ends up killing the olive tree.

This is why agronomy research efforts are focused on the search for the most resistant crops and the implementation of practices that reduce disease rates. In this vein, UCOLIVO Group researcher Juan Moral at the María de Maeztu Excellence Unit, Agronomy Department, has been able to reduce disease occurrence using an integrated disease management approach at a commercial olive grove with the Picual variety affected by the pathogen.

Since 1998, in the Grañón olive grove, a strategy integrating different practices has been used: replacing dead olive trees with crops that are more resistant to Verticillium wilt such as Frantoio trees after soil solarization (disinfestation using translucent plastic), chemical weed control, refraining from tilling, burning the waste from pruning, and increasing the plantation density with more Frantoio olive trees. 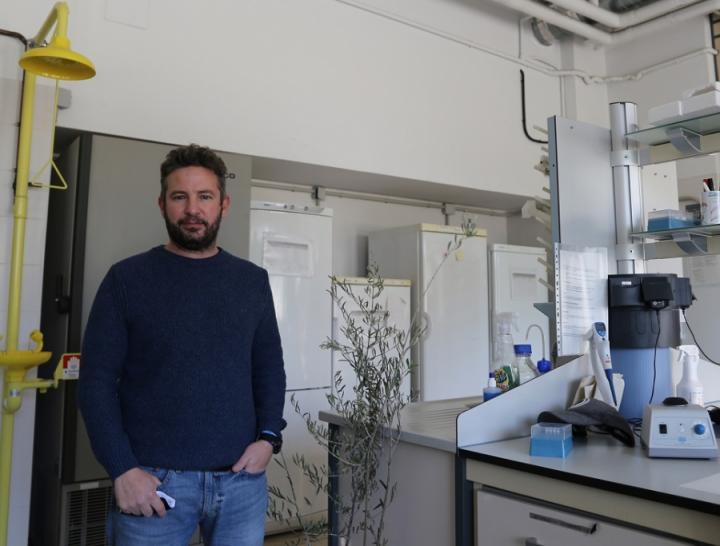 Researcher Juan Moral in the lab.
University of Córdoba

Upon comparing the Verticillium wilt epidemic at the Grañón grove with that at the Ancla grove, located in the same area, but using traditional management techniques, tilling and substituting sick olive trees with trees from the same Picual variety in soil without solarization, it was verified how the intensity and severity of the epidemic at the second olive grove was greater than at the Grañón grove. In addition, the comparison between the varieties Picual and Frantoio at the Grañón farm allowed researchers to observe how "the impact of the variety in the decrease in Verticillium wilt is even greater than the rest of the control practices that were used" as pointed out by Moral, since Frantoio trees suffered less from the disease. While the yearly mortality rate of the trees was 5.6 percent for Picual trees on the farm using traditional techniques, at the Grañón olive farm Picual trees suffered at a mortality rate of 3.1 percent and Frantoio trees only 0.6 percent.

This study signifies, for the first time, the integration of an Integrated Disease Management approach at a olive farm in field conditions. In addition, it is the first time the Frantoio variety, which is more resistant to Verticillium wilt, was commercially planted in Spain.

With these results, farmers in the olive sector now have an efficient new tool that can keep their farms safe.

- This press release was supplied by the University of Córdoba. It has been edited for style