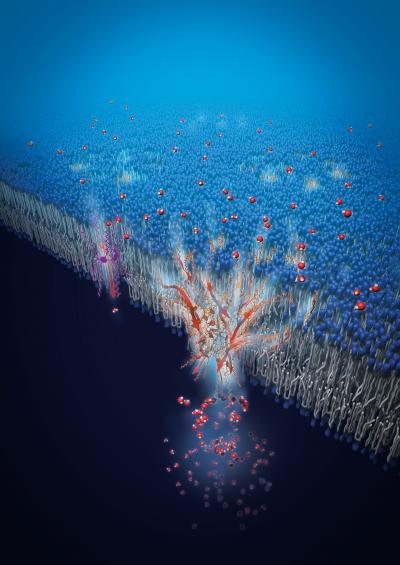 Artificial water channels enable fast and selective water permeation through water-wire networks.Credit: Erik Zumalt, Cockrell School of Engineering, The University of Texas at AustinA multidisciplinary group of engineers and scientists has discovered a new method for water filtration that could have implications for a variety of technologies, such as desalination plants, breathable and protective fabrics, and carbon capture in gas separations. The research team, led by Manish Kumar in the Cockrell School of Engineering at The University of Texas at Austin, published their findings in the latest issue of Nature Nanotechnology.

The study, which brought together researchers from UT Austin, Penn State University, the University of Tennessee, Fudan University and the University of Illinois at Urbana-Champaign, was initially inspired by the way our cells transport water throughout the body and began as an attempt to develop artificial channels for transporting water across membranes. The aim was to mimic aquaporins, essential membrane proteins that serve as water channels and are found in certain cells. Aquaporins are fast and efficient water filtration systems. They form pores in the membranes of cells in various parts of the body—eyes, kidneys, and lungs—where water is in greatest demand.

Kumar and the team didn't manage to mirror the aquaporin system exactly as planned. Instead, they discovered an even more effective water filtration process. Unlike the body's individual aquaporin cells, which function effectively independent of one another, the membranes developed by Kumar's research group didn't work well alone.

But, when he combined several of them to create networks of "water wires," they were highly effective at water transport and filtration. Water wires are densely connected chains of water molecules that move exceptionally fast, like a train and its individual cars.

"We were trying to copy the already complicated water transport process used by aquaporins and stumbled upon an entirely new, and even better, method," said Kumar, an associate professor in the Cockrell School's Department of Civil, Architectural and Environmental Engineering. "It was completely serendipitous. We had no idea it would happen."

Related Article: New Research Could Transform How We Filter Water

These networks of artificial membranes could prove useful for separating salt from water, a filtration process that is currently inefficient and costly. The new membrane has shown impressive desalination properties, exhibiting far more selective salt and presumably other contaminant removal when compared with existing processes.

"Our method is a thousand times more efficient than current desalination processes in terms of its selectivity and permeability," Kumar said. "For every 10,000 saltwater molecules that pass through current desalination systems, one salt molecule might not be filtered out. With our new membrane technology, one salt molecule for every 10 million water molecules would not be filtered out, while maintaining a water transport rate comparable to or better than current membranes."

For his entire career, Kumar has focused on developing materials and processes that take the functionality of biological molecular models and apply them into engineering scales.

"It is difficult to even effectively mimic the complexities of how the human body works, especially at the molecular level," he said. "This time, however, nature was the starting point for an even greater discovery than we could have ever hoped for."