As SARS-CoV-2 has the potential to mutate, it is important to check the efficacy of current diagnostic tests, say York University researchers, who found seven out of 27 methods had potential sequence mismatch issues that may lead to underperforming or false-negative COVID-19 test results.

Many of the tests were developed early in the outbreak when the virus was first identified and sequenced. The researchers say it is important to re-evaluate them periodically to ensure they still work.

"COVID-19 tests use polymerase chain reaction (PCR) assays to diagnose the virus in patients, but if those assays are mismatched due to genetic variability in the viral genome, that raises the concern that the tests may not be detecting all the circulating variants of the virus and results could be inaccurate," says York research associate Kashif Aziz Khan, corresponding author of a new study published today (June 10) in the journal Royal Society Open Science with associate professor Peter Cheung of the Faculty of Science.

Related Article: Current and Upcoming SARS-CoV-2 Diagnostic Tests: Everything You Need to Know 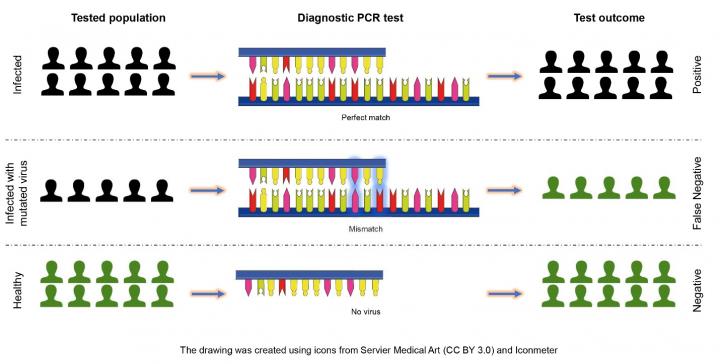 The illustration shows what could happen when there are sequence mismatches.
Kashif Aziz Khan, York University

Correcting any mismatches between the assays and the SARS-CoV-2 genome may help to improve the sensitivity and accuracy of some of the diagnostic tests.

The early sequencing of the virus allowed for the development of several PCR detection protocols by multiple national organizations that were published by the World Health Organization (WHO), but it may have also led to tests that do not account for variations and mutations.

This is not uncommon with viruses and has led at times to improper diagnosis of influenza, dengue, rabies, respiratory syncytial virus, hepatitis B, and human immunodeficiency virus.

The researchers tested genetic variations in more than 17,000 publicly available viral genome sequences worldwide and performed an exhaustive evaluation of 27 published diagnostic PCR assays, including those recommended by the WHO.

"These findings are potentially important for clinicians, laboratory professionals, and policy-makers as it gives them a better idea of which tests may deliver the best results and how to ensure the tests they are using are properly matched to the virus genome," says Khan.

- This press release was originally published on the York University website