The moon—provisionally designated S/2015 (136472) 1 and nicknamed MK 2—is more than 1,300 times fainter than Makemake. MK 2 was seen approximately 13,000 miles from the dwarf planet, and its diameter is estimated to be 100 miles across. Makemake is 870 miles wide. The dwarf planet, discovered in 2005, is named for a creation deity of the Rapa Nui people of Easter Island. 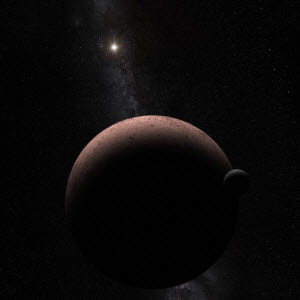 This artist's concept shows the distant dwarf planet Makemake and its newly discovered moon. Makemake and its moon, nicknamed MK 2, are more than 50 times farther away than Earth is from the sun.Image Courtesy of: NASA, ESA, and A. Parker (Southwest Research Institute)The Kuiper Belt is a vast reservoir of leftover frozen material from the construction of our solar system 4.5 billion years ago and home to several dwarf planets. Some of these worlds have known satellites, but this is the first discovery of a companion object to Makemake. Makemake is one of five dwarf planets recognized by the International Astronomical Union.

The observations were made in April 2015 with Hubble's Wide Field Camera 3. Hubble's unique ability to see faint objects near bright ones, together with its sharp resolution, allowed astronomers to pluck out the moon from Makemake's glare. The discovery was announced today in a Minor Planet Electronic Circular.

The observing team used the same Hubble technique to observe the moon as they did for finding the small satellites of Pluto in 2005, 2011, and 2012. Several previous searches around Makemake had turned up empty. "Our preliminary estimates show that the moon's orbit seems to be edge-on, and that means that often when you look at the system you are going to miss the moon because it gets lost in the bright glare of Makemake," said Alex Parker of Southwest Research Institute, Boulder, Colorado, who led the image analysis for the observations.

A moon's discovery can provide valuable information on the dwarf-planet system. By measuring the moon's orbit, astronomers can calculate a mass for the system and gain insight into its evolution.

Uncovering the moon also reinforces the idea that most dwarf planets have satellites.

"Makemake is in the class of rare Pluto-like objects, so finding a companion is important," Parker said. "The discovery of this moon has given us an opportunity to study Makemake in far greater detail than we ever would have been able to without the companion."

Finding this moon only increases the parallels between Pluto and Makemake. Both objects are already known to be covered in frozen methane. As was done with Pluto, further study of the satellite will easily reveal the density of Makemake, a key result that will indicate if the bulk compositions of Pluto and Makemake are also similar. "This new discovery opens a new chapter in comparative planetology in the outer solar system," said team leader Marc Buie of the Southwest Research Institute, Boulder, Colorado.

The researchers will need more Hubble observations to make accurate measurements to determine if the moon's orbit is elliptical or circular. Preliminary estimates indicate that if the moon is in a circular orbit, it completes a circuit around Makemake in 12 days or longer. 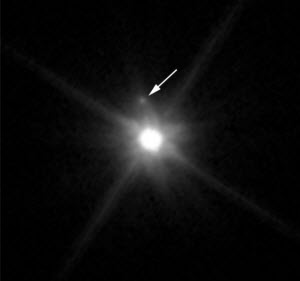 This Hubble image reveals the first moon ever discovered around the dwarf planet Makemake. The tiny satellite, located just above Makemake in this image, is barely visible because it is almost lost in the glare of the very bright dwarf planet. Hubble's sharp-eyed WFC3 made the observation in April 2015.Image Courtesy of: NASA, ESA, and A. Parker and M. Buie (SwRI)Determining the shape of the moon's orbit will help settle the question of its origin. A tight circular orbit means that MK 2 is probably the product of a collision between Makemake and another Kuiper Belt Object. If the moon is in a wide, elongated orbit, it is more likely to be a captured object from the Kuiper Belt. Either event would have likely occurred several billion years ago, when the solar system was young.

The discovery may have solved one mystery about Makemake. Previous infrared studies of the dwarf planet revealed that while Makemake's surface is almost entirely bright and very cold, some areas appear warmer than other areas. Astronomers had suggested that this discrepancy may be due to the sun warming discrete dark patches on Makemake's surface. However, unless Makemake is in a special orientation, these dark patches should make the dwarf planet's brightness vary substantially as it rotates. But this amount of variability has never been observed.

These previous infrared data did not have sufficient resolution to separate Makemake from MK 2. The team's reanalysis, based on the new Hubble observations, suggests that much of the warmer surface detected previously in infrared light may, in reality, simply have been the dark surface of the companion MK 2.

There are several possibilities that could explain why the moon would have a charcoal-black surface, even though it is orbiting a dwarf planet that is as bright as fresh snow. One idea is that, unlike larger objects such as Makemake, MK 2 is small enough that it cannot gravitationally hold onto a bright, icy crust, which sublimates, changing from solid to gas, under sunlight. This would make the moon similar to comets and other Kuiper Belt Objects, many of which are covered with very dark material.

When Pluto's moon Charon was discovered in 1978, astronomers quickly calculated the mass of the system. Pluto's mass was hundreds of times smaller than the mass originally estimated when it was found in 1930. With Charon's discovery, astronomers suddenly knew something was fundamentally different about Pluto. "That's the kind of transformative measurement that having a satellite can enable," Parker said.

For images and more information about Makemake's moon MK 2 and Hubble, visit: