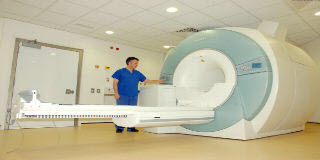 The amount of helium found in the Tanzania gas field is enough o fill over 1.2 million medical MRI scanners, scientists say.Photo courtesy of Durham UniversityA new approach to gas exploration has discovered a huge helium gas field, which could address the increasingly critical shortage of this vital yet rare element.

Helium doesn’t just make your voice squeaky—it is critical to many things we take for granted, including MRI scanners in medicine, welding, industrial leak detection, and nuclear energy. However, known reserves are quickly running out. Until now helium has never been found intentionally—being accidentally discovered in small quantities during oil and gas drilling.

Now, a research group from Durham and Oxford universities, working with Helium One, a Norway-headquartered helium exploration company, has developed a brand new exploration approach. The first use of this method has resulted in the discovery of a world-class helium gas field in Tanzania.

Their research shows that volcanic activity provides the intense heat necessary to release the gas from ancient, helium-bearing rocks. Within the Tanzanian East African Rift Valley, volcanoes have released helium from ancient deep rocks and have trapped this helium in shallower gas fields. The research is being presented by Durham University PhD student Diveena Danabalan at the Goldschmidt geochemistry conference in Yokohama, Japan.

Diveena Danabalan, of Durham University’s Department of Earth Sciences, said: “We show that volcanoes in the Rift play an important role in the formation of viable helium reserves. Volcanic activity likely provides the heat necessary to release the helium accumulated in ancient crustal rocks. However, if gas traps are located too close to a given volcano, they run the risk of helium being heavily diluted by volcanic gases such as carbon dioxide, just as we see in thermal springs from the region. We are now working to identify the ‘goldilocks-zone’ between the ancient crust and the modern volcanoes where the balance between helium release and volcanic dilution is ‘just right’.”

Professor Chris Ballentine, Department of Earth Sciences, University of Oxford, said: “We sampled helium gas (and nitrogen) just bubbling out of the ground in the Tanzanian East African Rift valley. By combining our understanding of helium geochemistry with seismic images of gas trapping structures, independent experts have calculated a probable resource of 54 Billion Cubic Feet (BCf) in just one part of the rift valley. This is enough to fill over 1.2 million medical MRI scanners. To put this discovery into perspective, global consumption of helium is about 8 BCf per year and the United States Federal Helium Reserve, which is the world’s largest supplier, has a current reserve of just 24.2 BCf. Total known reserves in the USA are around 153 BCf. This is a game changer for the future security of society’s helium needs and similar finds in the future may not be far away.”

Professor Jon Gluyas, Department of Earth Sciences, Durham University, said: “This is an outstanding example of industry and academia working together closely to deliver real value to society. The impact of this and expected future helium discoveries will secure supply for the medical scanning and other industries.”

Dr Pete Barry, Department of Earth Sciences, University of Oxford, who sampled the gases, added: “We can apply this same strategy to other parts of the world with a similar geological history to find new helium resources. Excitingly, we have linked the importance of volcanic activity for helium release with the presence of potential trapping structures and this study represents another step towards creating a viable model for helium exploration. This is badly needed given the current demand for helium.”