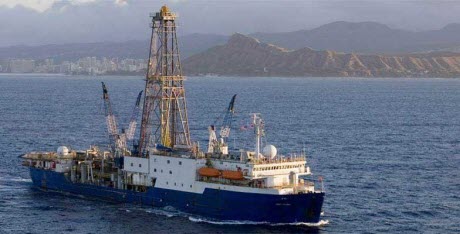 IODP’s JOIDES Resolution has recovered PETM sediment cores during past expeditions.Photo Credit: IODPThe earliest instrumental records of Earth’s climate, as measured by thermometers and other tools, start in the 1850s. To look further back in time, scientists investigate air bubbles trapped in ice cores, which expands the window to less than a million years. But to study Earth’s history over tens to hundreds of millions of years, researchers examine the chemical and biological signatures of deep sea sediment archives.

New research published Mar. 21 in Nature Geoscience by Richard Zeebe, professor at the University of Hawaii at Manoa School of Ocean and Earth Science and Technology (SOEST), and colleagues looks at changes of Earth’s temperature and atmospheric carbon dioxide (CO2) since the end of the age of the dinosaurs. Their findings suggest humans are releasing carbon about ten times faster than during any event in the past 66 million years.

The research team developed a new approach and was able to determine the duration of the onset of an important past climate event, the Paleocene-Eocene Thermal Maximum, PETM for short, 56 million years ago.

“As far as we know, the PETM has the largest carbon release during the past 66 million years,” said Zeebe.

Zeebe and co-authors Andy Ridgwell (University of Bristol/ University of California) and James Zachos (University of California) combined analyses of chemical properties of PETM sediment cores with numerical simulations of Earth's climate and carbon cycle. Their new method allows them to extract rates of change from a sediment record without the need for an actual sediment age model. Applied to the PETM, they calculated how fast the carbon was released, how fast Earth's surface warmed, and constrained the time scale of the onset, which was at least 4,000 years.

Red clay band in deep-sea sediment cores marks the onset of the PETM.Image Credit: J.ZachosThe rate of carbon release during the PETM was determined to be much smaller than the current input of carbon to the atmosphere from human activities. Carbon release rates from human sources reached a record high in 2014 of about 37 billion metric tons of CO2. The researchers estimated the maximum sustained carbon release rate during the PETM had to be less than 4 billion metric tons of CO2 per year–about one-tenth the current rate.

“Because our carbon release rate is unprecedented over such a long time period in Earth’s history, it also means that we have effectively entered a 'no-analogue' state. This represents a big challenge for projecting future climate changes because we have no good comparison from the past,” said Zeebe.

Whereas large climate transitions in the past may have been relatively smooth, there is no guarantee for the future. The climate system is non-linear, which means its response to a forcing (such as our CO2 emissions) is a complex process involving a whole suite of components.

“If you kick a system very fast, it usually responds differently than if you nudge it slowly but steadily," said Zeebe. “Also, it is rather likely that future disruptions of ecosystems will exceed the relatively limited extinctions observed at the PETM."

“In studying one of the most dramatic episodes of global change since the end of the age of the dinosaurs, these scientists show that we are currently in uncharted territory in the rate carbon is being released into the atmosphere and oceans,” says Candace Major, program director in the National Science Foundation (NSF)’s Division of Ocean Sciences, which funded the research.

Scientists like Zeebe also study the PETM to better understand long-term changes in Earth’s future climate. Most of the current climate debate concentrates only on this century but the PETM suggests that the consequences of our massive fossil fuel burning will have a much, much longer tail.

“Everyone is focused on what happens by 2100. But that’s only two generations from today. It’s like: If the world ends in 2100 we’re probably OK!” said Zeebe. “But it’s very clear that over a longer timescale there will be much bigger changes.”

Zeebe and his colleagues continue their work on the PETM to study other aspects of the event–for example, determining how severe ocean acidification was during the PETM and what impact it had on calcifying organisms in the ocean. This may provide insight about what to expect in the future as Earth’s climate continues to warm and oceans keep acidifying.