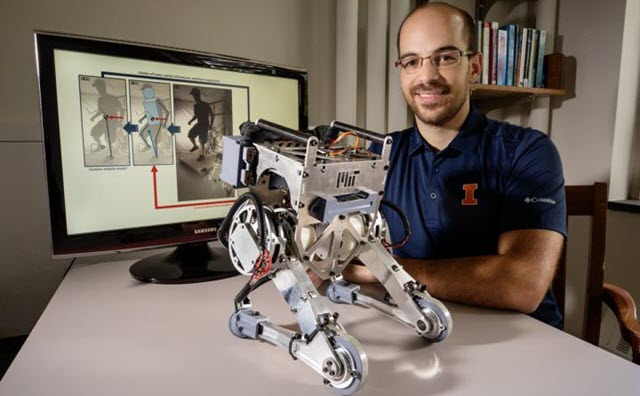 CHAMPAIGN, IL — Imagine being trapped inside a collapsed building after a disaster, wondering if anybody will be brave enough to rescue you. Suddenly, a door bursts open, and standing in the shadows is a robot. But this is not just any robot; this one has quick, humanlike reflexes and is guided by a person from a remote location who feels the same physical forces the robot is experiencing.

Engineers from the University of Illinois and the Massachusetts Institute of Technology are a step closer to human-operated robotics with their two-legged unit, named Little Hermes, which can walk, run, jump, and interact with the environment in synchrony with a human operator.

João Ramos, a U. of I. mechanical science and engineering professor and former MIT researcher, collaborated with professor Sangbae Kim at MIT to develop Little Hermes, a small-scale bipedal robot designed to go places deemed unsafe for humans. The researchers report their findings in the journal Science Robotics.

"We were motivated by watching the 2011 Tohoku, Japan, earthquake, tsunami and subsequent Fukushima Dai-ichi nuclear plant disaster unfold," Ramos said. "We thought that if a robot could have entered the power plant after the disaster, things could have ended differently. This incident was a wake-up call for the robotics community."

Much of the current human-operated robotics research does not include any force-feedback information to the operator, Ramos said. If human-assisted robots are going to interact with the environment in a way comparable to humans, he said, the operators will need to feel the same forces that the robot "feels."

The team developed a motion-capture suit, which is like an exoskeleton worn by a human operator, Ramos said. The suit captures the operator's motion and the forces the operator exerts on the environment to move, and transfers that data to the robot, which reproduces the motion with little to no delay.

Click here to see a video summary of this research.

However, robots do not have an inherent sense of balance like a person does, so the researchers fit the operator with a vest that sends force-feedback information from the robot to the operator.

"If the robot begins to fall, the operator feels a push in that direction through the vest," Ramos said. "Naturally, the operator's reaction is to take a step to balance themselves, and the robot does the same, synchronously, preventing it from tipping over."

Much of the current robotics research focuses on developing fully automated units, Ramos said. "I believe that we will achieve fully autonomous robotics at some point, but that is still pretty far in the future. It is advantageous to continue work with human-operated robotics rather than putting all of our efforts into programming fully autonomous robot technology. This way, humans still maintain a considerable level of control."

There are a variety of advancements in store for Little Hermes, the researchers said. For instance, the teleoperation between the robot and operator happens through a wired side-by-side interface, but the researchers plan to use wireless technology, similar to what is used to control drones.

"We also plan to develop robot-to-human force-feedback devices to other parts of the body like the feet and hands," Ramos said. "Additionally, everything we have developed so far is not constrained to bipedal robots; any of the technology transfers easily to other mobile systems like quadrupedal and wheeled robots."