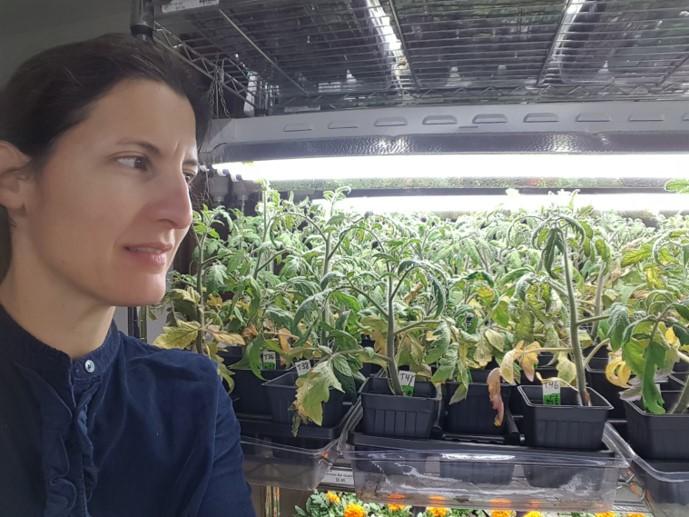 Leilah Krounbi, a former Cornell PhD student, used the Canadian Light Source synchrotron at the University of Saskatchewan to test the feasibility of a fertilizer made from human waste.
Leilah Krounbi

SASKATOON, CANADA — Researchers from Cornell University's College of Agriculture and Life Sciences and the Canadian Light Source (CLS) at the University of Saskatchewan have proven it is possible to create nitrogen-rich fertilizer by combining the solid and liquid components of human waste.

The discovery, published recently in the journal Sustainable Chemistry and Engineering, has the potential to increase agriculture yields in developing countries and reduce contamination of groundwater caused by nitrogen runoff.

Special separating toilets that were developed through the Reinvent the Toilet Challenge have helped solve long-standing sanitation problems in the slums of Nairobi, Kenya. However, the methods used to dispose of the two outputs failed to capture a key nutrient that local fields were starving for: nitrogen.

Cornell researchers Leilah Krounbi, a former PhD student, now at the Weizmann Institute in Israel, and Johannes Lehmann, senior author and professor of soil and crop sciences, wondered whether it might be possible to close the waste stream loop by recycling nitrogen from the urine, which was otherwise being lost to runoff. While other researchers have engineered adsorbers using high-tech ingredients such as carbon nanotubes or activated carbons, Lehmann and his team wanted to know if they could do so with decidedly low-tech materials like human feces. Adsorbers are materials whose surfaces can capture and hold gas or liquids.

"We were interested in figuring out how to bring nitrogen out of the liquid waste streams, bring it onto a solid material so it has a fertilizer quality and can be used in this idea of a circular economy," said Lehmann.

The researchers began by heating the solid component of human waste to 500 degrees Celsius in the absence of oxygen to produce a pathogen-free charcoal called biochar. Next, they manipulated the surface of the biochar by priming it with CO2, which enabled it to soak up ammonia, the nitrogen-rich gas given off by urine. The chemical process caused the ammonia to bond to the biochar. By repeating the process, they could load up the biochar with extra layers of nitrogen. The result is a solid material rich in nitrogen.

Using the SGM beamline at the CLS enabled Lehmann and his team to see how the chemistry in the nitrogen changed as it adsorbed ammonia. The beamline also provided an indication of just how available the nitrogen would be to plants if the resulting material was used as fertilizer.

"In order to understand what the interactions are between nitrogen, the ammonia gas and the carbon, there really is no other good way than using the NEXAFS (near-edge, X-ray absorption fine structure) spectroscopy that the CLS beamline offers," said Lehmann. "It was really our workhorse to understand what kind of chemical bonds are appearing between the nitrogen gas and our adsorber."

The research team has demonstrated that it is indeed possible to make a fertilizer using the most basic of ingredients, human waste. However, they still have a number of questions to answer: Can you optimize the process to maximize the amount of ammonia soaked up by biochar? How will this "recycled" fertilizer compare to existing commercial nitrogen fertilizers for different crops and soils? Can you build a cost-effective machine that performs this process automatically in a real-world setting?

What started as the search for a solution to a highly localized problem has widespread applicability, said Lehmann. "I do think it is as important for a Saskatchewan wastewater treatment plant, or a dairy farm in upstate New York, as it is for a resident in Nairobi. It's a basic principle that has utility anywhere."