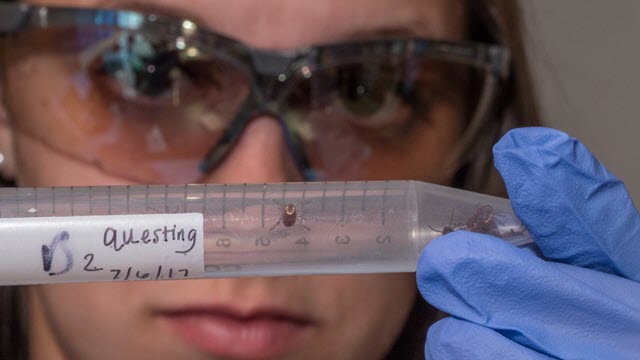 A researcher holds up a vial containing a tick in a UC biology labCREDIT: Jay Yocis/UC Creative Services

Ticks are hardy little brutes that can go as long as a year without a meal.

Now, scientists at the University of Cincinnati say the hungrier ticks are, the harder they try to find you or other hosts. The findings could have implications for the spread of tick-borne disease such as Lyme or Rocky Mountain Spotted Fever.

"Starved ticks are more likely to look for a host," said Andrew Rosendale, lead author of the study and UC adjunct assistant professor of biology. "Other studies have found that starved ticks take larger blood meals. They're attached to the host longer, which provides a greater opportunity to transmit diseases."

The study was published in the journal Molecular Ecology.

Ticks drink blood as larvae, nymphs, and adults but spend most of their lives on the ground in tall grass, patiently biding their time for a victim and presumably ignoring their rumbling stomachs.

Finding a suitable animal upon which to feed is hard, so ticks must be prepared to wait. And wait. Rosendale, who also works as assistant professor at Mount St. Joseph University, said being able to go long periods without a meal is a tick's superpower.

Biologists in UC's McMicken College of Arts and Sciences studied the changing gene expression and physiology of lab-raised dog ticks that were subjected to more than 36 weeks of starvation.

Studies have found that starving animals often take bigger risks, such as hunting more dangerous prey or exposing themselves to predators to forage for food. UC's research suggests ticks are no exception.

In the wild, adult ticks explore the undergrowth and climb tall grass. They reach out with the claws on their forelegs, a behavior called questing, to snag an animal's fur or your denim jeans. Then they burrow into their hosts with mouthparts shaped like ratchets that keep them in place.

In the lab, UC researchers stimulated the ticks' questing behavior by breathing into identical glass cylinders. (Ticks can sense carbon dioxide so they know when a possible meal is close at hand.) Biologists recorded differences in activity between just-fed ticks and starving ones. They found that starved ticks had higher activity levels and increased questing behavior than recently fed ones.

Starved ticks also had marked changes in their physiology and gene expression.

Ticks can go so long between meals because of their slow metabolism. "In the absence of any host cues, they go into a dormant state where they don't move around a lot," UC biology professor Joshua Benoit said.

But after three months without food, a tick's metabolism actually increases significantly—by as much as 100 percent—and remains at this higher rate for weeks in association with its increased activity. In fact, some researchers collect ticks in the wild by placing dry ice in the woods to entice them with the sublimation of carbon dioxide.

Likewise, UC biologists found that genes related to immunity were activated by starvation, which could be another survival mechanism. Animals that feed on blood must have a immune system capable of fighting bacteria and other microorganisms. By activating genes associated with immunity, ticks might be preparing for an imminent meal.

More strangely, UC biologists found that genes associated with a starved tick's salivary glands were activated. Saliva is known to help ticks drink more blood more quickly, a useful ability when you're clinging precariously to a moving animal in thick brush. The sticky saliva also helps cement the tick to the host.

The study was funded by the U.S. Department of Agriculture, UC's Faculty Development Research Grant and the National Science Foundation. UC graduate Megan Dunlevy and Marshall McCue of the metabolic measurement firm Sable Systems International contributed to the study.

UC is tracking tick populations at its Center for Field Studies and in several forests in the Great Parks of Hamilton County, Ohio. Benoit and Rosendale have collaborated on several other tick studies.

Tick larvae feed mostly on mice and rabbits they find close to the ground. Nymphs and adults feed on larger mammals they reach by climbing up tall blades of grass. Benoit said ticks typically do not climb up trees or drop onto animals from the tree canopy. So if you find a tick on your head, it likely climbed up from your legs or waist.

Ticks are susceptible to temperature and humidity. Even short bouts of dehydration can shorten a tick's lifespan considerably in the wild. But Rosendale said ticks are expanding their territories to exploit new habitat made available by climate change.

Ticks are especially problematic for wildlife such as moose that live in regions where the cold historically kept parasite numbers in check. Infested animals are sometimes called "ghost moose" because they rub off their dark fur to remove ticks.

"We've studied the moose tick as well in our lab. Moose are particularly susceptible because they're not good at grooming themselves of ticks. They can be infested with thousands and thousands of ticks, so much so that they can die from blood loss," Rosendale said.

While ticks might make a short list of most-reviled creatures, Benoit said they serve an important ecological role.

"People want to think of parasites as being awful things. But in ecosystems they're important regulators in keeping populations in check. They transmit diseases that will kill deer, rabbits or mice," Benoit said.

"Ecosystems are [delicate] networks. So eliminating a parasite could have major implications," he said. "Two years of rabbit reproduction is a lot of rabbits."

The earliest ticks recorded are more than 90 million years old and fed on dinosaurs. Benoit said there is something almost admirable about a natural design that has been perfected by evolution.

"Biologically, they're interesting," Benoit said. "They're perfectly adapted to one thing: survival."