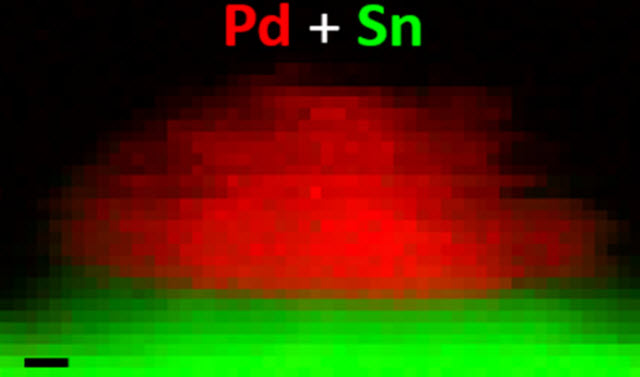 Hydrogen peroxide is one of the most common and versatile of household products. In dilute form, it can disinfect wounds and bleach hair, whiten teeth and remove stains from clothing, clean contact lenses, and kill mold and algae.

In high concentrations, hydrogen peroxide (H2O2) can be catalytically decomposed into oxygen and steam and used as a propellant or as an explosive.

Hydrogen peroxide is typically made in a multi-step, energy-intensive process that requires it to be produced in large quantities and shipped and stored in a highly concentrated form.

Now a group of researchers from the United Kingdom and the United States has developed a method of producing hydrogen peroxide on demand through a simple, one-step process. The method enables dilute H2O2 to be made directly from hydrogen and oxygen in small quantities on-site, making it more accessible to underdeveloped regions of the world, where it could be used to purify water.

In an article published today in Science, the world’s leading science journal, the group reported that bimetallic compounds consisting of palladium and any one of six other elements can effectively catalyse the hydrogenation of oxygen to form hydrogen peroxide. The project was led by Graham J. Hutchings, professor of physical chemistry and director of the Cardiff Catalysis Institute at Cardiff University in Wales.

The researchers say their new process overcomes a longstanding challenge to the catalytic production of hydrogen peroxide—namely the tendency of the catalyst to also quickly decompose the product into water soon after it has been made.

“Being able to produce H2O2 directly opens up a whole host of possibilities, most notably in the field of water purification [in areas] where safe and clean drinking water is at a premium.”

The Science article, titled “Palladium-tin catalysts for the direct synthesis of H2O2 with high selectivity,” was coauthored by other researchers from the Cardiff Catalysis Institute and from Lehigh University in Bethlehem, Pa., and the U.S. Department of Energy’s Oak Ridge National Laboratory in Tennessee.

The article is the fourth on the topic that researchers from Cardiff and Lehigh have published in Science over the past decade. The first three dealt with advances in creating and using an alloy catalyst of gold and palladium; one, published in 2009, discussed that catalyst’s potential to produce hydrogen peroxide quickly and efficiently while preventing its decomposition.

The new catalysts, said Christopher J. Kiely, can be made by combining palladium with tin, cobalt, nickel, gallium, indium or zinc, all of which are cheaper than gold. Furthermore, the catalyst can be made without the need to pre-treat the catalyst support with nitric acid, which is a requirement of the gold-palladium alloys.

“Scientists have known for more than a century that palladium metal can catalyse the direct reaction of hydrogen and oxygen to make hydrogen peroxide,” said Kiely, professor of materials science and chemical engineering and director of Lehigh’s Electron Microscopy and Nanofabrication Facility. “Unfortunately, the palladium also rapidly hydrogenates or decomposes the hydrogen peroxide that is produced to form water.

“In 2009, we figured out that gold-palladium nanoparticles, supported on acid-washed activated carbon, could switch off the second undesired reaction. But gold is expensive. For the catalyst to be industrially competitive, the gold needs to be replaced with a cheaper metal.”

The group searched for a different metal to replace the gold, said Kiely, and found that a catalyst composed of palladium and tin could carry out the reaction to form hydrogen peroxide just as effectively as the gold-palladium catalyst. Subsequent tests showed that another five metals, in combination with palladium, also performed very well.

The group then used a variety of electron microscopy techniques to understand why palladium alloys caused the hydrogen peroxide that was produced to decompose and how this second reaction could be prevented. The answer, they learned, had to do with variations in the sizes and composition of the metal alloy catalyst particles.

“When you make a catalyst,” said Kiely, “you always tend to generate catalyst particles that span a range of different sizes. When we measured the composition of the gold-palladium particles, it turned out that the larger particles contained a lot of gold while the smaller particles had a lot of palladium. Only the medium-sized particles had the right composition.

The group deposited a palladium-tin mixture onto a titanium dioxide (TiO2) support and observed that some of the tin spread out to form a very thin tin oxide layer over the TiO2 while the remainder was consumed in making palladium-tin alloy particles. The researchers developed a simple three-step heat treatment process that induced the secondary tin-oxide support layer to encapsulate the ultra-small palladium-rich particles. This served to muzzle the nuisance particles and prevent them from catalysing the hydrogenation and decomposition of the hydrogen peroxide.

“The heat treatment induced the tin-oxide layer to crawl over and effectively bury the small palladium-rich particles and stop them from working,” said Kiely. “More importantly, the larger palladium-tin alloy particles, which efficiently generate the hydrogen peroxide, were unaffected. This phenomenon, which is called a strong-metal-support-interaction, is normally not desired. You don’t usually want the metal particles to be covered with thin oxide layers because that deactivates the catalysts. However, in this case we have managed to use the phenomenon selectively to deactivate only the small detrimental particles, while leaving the larger beneficial alloy particles free to do their work.”

“It was a long, hard slog to develop the material,” he said, “but the resulting final catalyst has excellent performance characteristics.”

In the Science article, the researchers said that the palladium-tin catalysts supported on titanium dioxide were able to switch off the hydrogenation of H2O2 and give an overall selectivity to the desired product of more than 95 percent.