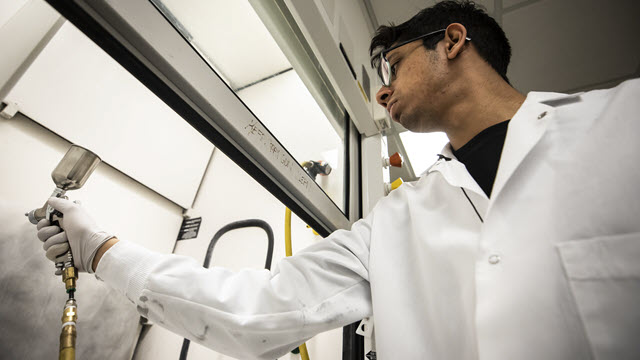 A new class of coatings that sheds ice effortlessly from even large surfaces has moved researchers closer to their decades-long goal of ice-proofing cargo ships, airplanes, power lines, and other large structures.

The spray-on coatings, developed at the University of Michigan, cause ice to fall away from structures—regardless of their size—with just the force of a light breeze, or often the weight of the ice itself. A paper on the research is published in Science.

In a test on a mock power line, the coating shed ice immediately.

The researchers overcame a major limitation of previous ice-repellent coatings—while they worked well on small areas, researchers found in field testing that they didn’t shed ice on very large surfaces as effectively as they had hoped. That’s an issue, since ice tends to cause the biggest problems on the biggest surfaces—sapping efficiency, jeopardizing safety, and necessitating costly removal.

They cleared this hurdle with a “beautiful demonstration of mechanics.” Anish Tuteja, an associate professor of materials science and engineering, described how he and his colleagues turned to a property that isn’t well-known in icing research.

“For decades, coating research has focused on lowering adhesion strength—the force per unit area required to tear a sheet of ice from a surface,” Tuteja said. “The problem with this strategy is that the larger the sheet of ice, the more force is required. We found that we were bumping up against the limits of low adhesion strength, and our coatings became ineffective once the surface area got large enough.”

The new coatings solve the problem by introducing a second strategy: low interfacial toughness, abbreviated LIT. Surfaces with low interfacial toughness encourage cracks to form between ice and the surface. And unlike breaking an ice sheet’s surface adhesion, which requires tearing the entire sheet free, a crack only breaks the surface free along its leading edge. Once that crack starts, it can quickly spread across the entire iced surface, regardless of its size.

“Imagine pulling a rug across a floor,” said Michael Thouless, the Janine Johnson Weins Professor of Engineering in mechanical engineering. “The larger the rug, the harder it is to move. You are resisted by the strength of the entire interface between the rug and floor. The frictional force is analogous to the interfacial strength.

“But now imagine there’s a wrinkle in that rug. It’s easy to keep pushing that wrinkle across the rug, regardless of how big the rug is. The resistance to propagating the wrinkle is analogous to the interfacial toughness that resists the propagation of a crack.”

Thouless said the concept of interfacial toughness is well known in the field of fracture mechanics, where it underpins products like laminated surfaces and adhesive-based aircraft joints. But until now, it hadn’t been applied in ice mitigation. The advance came when Thouless learned of Tuteja’s previous work and saw an opportunity.

“I pointed out to Anish that if he were to test increasing lengths of ice, he would find the failure load would rise while interfacial strength was important, but then plateau once toughness became important. Anish and his students tried the experiments and ended up with a really beautiful demonstration of the mechanics, and a new concept for ice adhesion.”

To test the idea, Tuteja’s team used a technique he honed during previous coating research. By mapping out the properties of a vast library of substances and adding interfacial toughness as well as adhesion strength to the equation, they were able to mathematically predict the properties of a coating without the need to physically test each one. This enabled them to concoct a wide variety of combinations, each with a specifically tailored balance between interfacial toughness and adhesion strength.

They tested a variety of coatings on large surfaces—a rigid aluminum sheet approximately 3 feet square, and a flexible aluminum piece approximately 1 inch wide and 3 feet long, to mimic a power line. On every surface, ice fell off immediately due to its own weight. It stuck fast, however, to the control surfaces, which were identical in size—one was uncoated and another was coated with an earlier icephobic coating.

The team’s next step is to improve its durability of the LIT coatings.