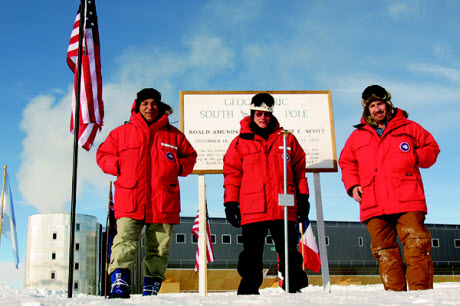 University of Delaware researchers will continue their involvement in the operation of the IceCube Neutrino Observatory at the South Pole, as part of an international collaboration. Shown (from left) are Stoyan Stoyanov, Tom Gaisser, who leads the UD team, and James Roth at the Geographic South Pole.Photo courtesy of the University of DelawareSmaller than an atom and hurtling through space at near the speed of light, neutrinos are high-energy particles that pass right through just about anything in their way—yourself included—at a pace of billions per second.

But the IceCube Neutrino Observatory is catching some of these tiny particles ever so briefly in its icy net. And those findings are opening up new avenues of exploration into the universe and the violent cosmic events—perhaps colliding black holes or exploding stars—that likely blasted these “ghost particles” into space.

On Mar. 30, the National Science Foundation announced a five-year, $35 million grant for the continued operation and management of IceCube, the neutrino detector located over a mile deep in the ice at NSF’s Amundsen-Scott South Pole Station.

The University of Wisconsin-Madison will continue its role as operator of IceCube, and subawards will be made to seven U.S. institutions, including the University of Delaware, that help to maintain and operate the observatory.

IceCube consists of more than 5,000 optical sensors suspended on 86 cables, like strands of pearls in the ice, a mile beneath the South Pole.

Researchers in the UD Department of Physics and Astronomy, who have been involved in the multi-institutional collaboration since its inception 15 years ago, will receive a total of $750,000 over the next five years to maintain the operation of IceTop, an array of sensors installed at IceCube’s surface. The major task for the UD team is monitoring and quality control of the data from IceTop.

“With IceCube, we’ve been very successful in finding high-energy neutrinos,” says Thomas K. Gaisser, Martin A. Pomerantz Chair of Physics and Astronomy, co-principal investigator on the IceCube project and head of the team at UD. “Renewal of the observatory grant is a vote of confidence from the National Science Foundation and provides a clear path forward.” 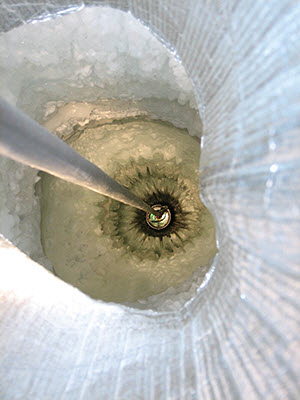 The deployment of each of the 86 IceCube strings lasted about 11 hours. In each hole, 60 sensors (called digital optical modules, or DOMs) had to be quickly installed before the ice completely froze around them. Photo courtesy of Jim Haugen, IceCube/NSFIceCube was the first scientific instrument to detect very high-energy neutrinos from beyond our solar system, neutrinos with up to a billion times more energy than had been observed previously. So far, IceCube has detected more than a million neutrinos, and the few hundred that are astronomically interesting have been the focus of research.

Neutrinos are nearly massless particles created in nuclear reactions, including some of the most energetic events in the universe. Colliding black holes, the violent cores of galaxies, supernovas, and pulsars are believed by scientists to be accelerating these high-energy particles, many billions of which pass through the Earth every second.

Because they have almost no mass and rarely interact with matter, they are excruciatingly difficult to detect and require detectors the size of IceCube, which occupies a cubic kilometer of Antarctic ice, to capture the fleeting bursts of light created when the occasional neutrino crashes into another particle.

But the elusive qualities that make neutrinos so hard to detect are also of significant interest to science. Since the particles glide through space unhindered by stars, planets and the powerful magnetic fields that punctuate the universe, it means they are virtually pristine and harbor valuable clues about their sources.

In addition to its contributions to scientific research, IceCube has been a focal point for introducing young students to science. UD developed an online “Antarctic Adventure” to engage students and the public as the detector was being built, and IceCube Masterclasses have since been held involving the University of Wisconsin, UD and other research institutions, including several in Europe. These daylong experiences give high school students a glimpse into neutrino astronomy as they meet with scientists, analyze data and try their hand at computer modeling to identify particle pathways.

The collaboration that operates IceCube encompasses over 300 researchers from 47 institutions in 12 countries. The NSF cooperative agreement includes subawards to seven U.S. institutions that contribute to IceCube core activities: the University of Delaware is the principal institution in the maintenance of IceTop, the surface component of the IceCube observatory; Lawrence Berkeley National Laboratory has major responsibilities in the data acquisition maintenance and computing infrastructure as well as in the long-term data archive at the National Energy Research Scientific Computing Center; Penn State University’s efforts focus on simulation production and data acquisition firmware support; the University of Maryland coordinates IceCube software, including online filtering and simulation; the University of Alabama at Tuscaloosa leads the calibration efforts as well as the reconstruction and analysis tools; Michigan State University is a main contributor to the simulation software and production; and the University of Wisconsin-River Falls oversees the education and outreach program.

Every institution contributes to the outstanding performance of the Antarctic neutrino detector, either with monetary or in-kind contributions. Data centers at DESY Zeuthen preserve a second copy of raw data, and the simulation production is a distributed effort that includes computing facilities in Belgium, Canada, Germany, Sweden and the U.S.

The performance of the IceCube detector has steadily improved and a key goal will be to speed up the analysis of neutrinos of interest in order to quickly alert other observatories. For example, because neutrinos for something like a supernova explosion can arrive at the IceCube detector a few hours before photons, alerts can be quickly sent to other types of observatories.

“With an early warning from neutrino and possibly gravitational wave detectors to all other telescopes, we might have the astronomical event of the 21st century,” says Francis Halzen, principal investigator for the project at the University of Wisconsin-Madison.