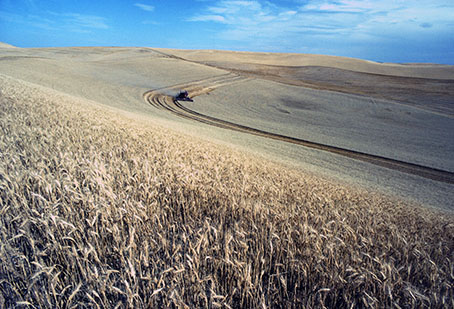 Wheat field in the Palouse area of Washington state.University of ArkansasFAYETTEVILLE, Ark. – U.S. wheat growers resist converting to a more profitable method of farming because of ideology – their personal beliefs about organic farming – rather than technical or material obstacles, according to a new study co-authored by a University of Arkansas researcher.

Funded by the U.S. Department of Agriculture, “Ideological Challenges to Changing Strategic Orientation in Commodity Agriculture” was authored by Melea Press at the University of Bath in England, Eric Arnould at Southern Denmark University, Jeff Murray at the University of Arkansas and Katherine Strand at McGill University in Canada. Their study was published in the November issue of the Journal of Marketing.

Conventional farming, also called industrial agriculture, uses chemical pesticides and herbicides and synthetic or chemical fertilizers. Without these chemicals, organic farming relies on crop rotation, animal and plant manures for fertilizers and other biological or mechanical processes for pest control.

So why do farmers who use chemicals resist change when profit isn’t an issue and technical or material obstacles such as learning and using new equipment or keeping different kinds of records are not a deterrent? The same reason organic farmers adopt new growing methods: Ideology.

“Across our data, we found expressions of ideological tensions embedded in the different strategic orientations to agriculture,” said Jeff Murray, marketing professor in the Sam M. Walton College of Business. “One would think that obstacles to the expansion to organic commodity production are mostly technological or material, but instead it’s the intensity of these ideological tensions that impedes the transition to a more economically strategic orientation. And likely, until these tensions subside, the transition will remain in a stage of crisis.”

Considering the economic benefits of organic wheat production, the researchers sought to examine the challenges farmers face as they experimented with a new strategic orientation for doing business. Specifically, the researchers wanted to understand the extent to which ideology – specific beliefs and attitudes about the methods of production – affected the legitimacy of different ways of doing business.

To answer these questions, the researchers conducted interviews with 23 wheat producers operating in the high plains region of the American West. Fifteen of the producers were organic farmers, three were chemical and five were so-called no-till or minimum-till farmers. Three in the latter category were chemical-only farmers and two had both organic and chemical fields. The researchers interviewed farmers in their homes, fields and by phone.

The researchers found that strategic orientations for doing business may be thought of as ideologies. Rather than benefiting their business, these ideologies are likely to contend with each other, Murray said. In other words, a producer’s beliefs or opinions about what is the right way to farm might not match the most efficient or lucrative method of production.

In a broader context, the findings show that individuals may be less committed to so-called “normative” legitimacy, that is, the proper, most efficient or most economical way of doing business, and more committed to cultural or cognitive forces, said Murray. The researchers emphasized the importance of recognizing how these ideological beliefs influence farming methods and using this understanding to find new ways to inspire farmers to adopt profitable changes.

“When approaching strategic change, managers might have greater success if they recognize that potentially conflicting ideologies are in play,” Murray said.

Murray holds the R.A. & Vivian Young Chair in the Department of Marketing.