WOODS HOLE, MA — Millions of tons of plastic trash are fouling the world's ocean, most of it tiny pieces of microplastic less than a quarter-inch in size. Even the smallest marine animals can ingest these microplastics, potentially threatening their survival.

Marine microplastics aren't floating solo, either—they quickly pick up a thin coating of bacteria and other microbes, a biofilm known as "The Plastisphere." These biofilms can influence the microplastics' fate—causing them to sink or float, or breaking them down into even tinier bits, for example. They can even make the plastic smell or taste like food to some marine organisms. But very little is known about what kinds of microbes are in the Plastisphere, and how they interact with one another and the plastic.

Now, using an innovative microscopy method developed at the Marine Biological Laboratory (MBL), Woods Hole, scientists have revealed the structure of the microbial communities coating microplastic samples from a variety of ocean sites. The team, led by Linda Amaral-Zettler (who coined the term "Plastisphere"), Jessica Mark Welch, and Cathleen Schlundt, reports its results this week in Molecular Ecology Resources.

The MBL team built upon an fluorescence imaging technique developed by Mark Welch and colleagues to literally see the spatial organization of microbes on the plastic samples. They did so by designing probes that fluorescently lit up and targeted major, known bacterial groups in the Plastisphere. 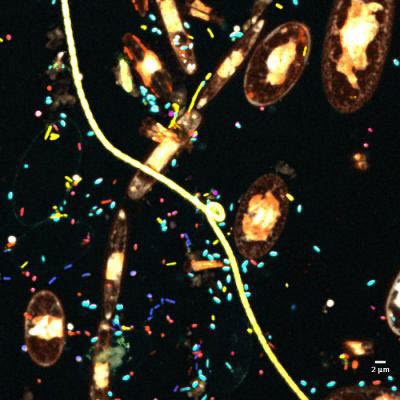 The structure of microbial communities colonizing microplastics collected from the North Atlantic Ocean (Vineyard Sound, Woods Hole, Mass.) This image reveals the phylogenetic affiliations of different bacterial groups. Large ellipsoid and pennate yellow cells= diatoms; long filamentous cell across center = cyanobacteria; blue= general bacteria; yellow rods = Bacteroidetes; red = Alphaproteobacteria; cyan= Rhodobacteraceae. Scale bar is 2 micrometers. Imaging technology is confocal laser-scanning and CLASI-FISH.Credit: Cathleen Schlundt"We now have a toolkit that enables us to understand the spatial structure of the Plastisphere and, combined with other methods, a better future way to understand the Plastisphere's major microbial players, what they are doing, and their impact on the fate of plastic litter in the ocean," said Amaral-Zettler, a MBL Fellow from the NIOZ Royal Netherlands Institute for Sea Research and the University of Amsterdam.

The scientists saw diatoms and bacteria colonizing the microplastics, dominated in all cases by three phyla: Proteobacteria, Cyanobacteria, and Bacteriodetes. Spatially, the Plastisphere microbial communities were heterogeneously mixed, providing the first glimpse of bacterial interactions on marine microplastics.

Mark Welch and colleagues have previously applied their imaging technology to study microbial communities in the human mouth and in the digestive tract of cuttlefish and vertebrates.

This study customized and extended the technology, called CLASI-FISH (Combinatorial Labeling And Spectral Imaging Fluorescence In Situ Hybridization). Amaral Zettler finds the technology so powerful, she plans to establish a CLASI-FISH microscopy platform in the Netherlands.