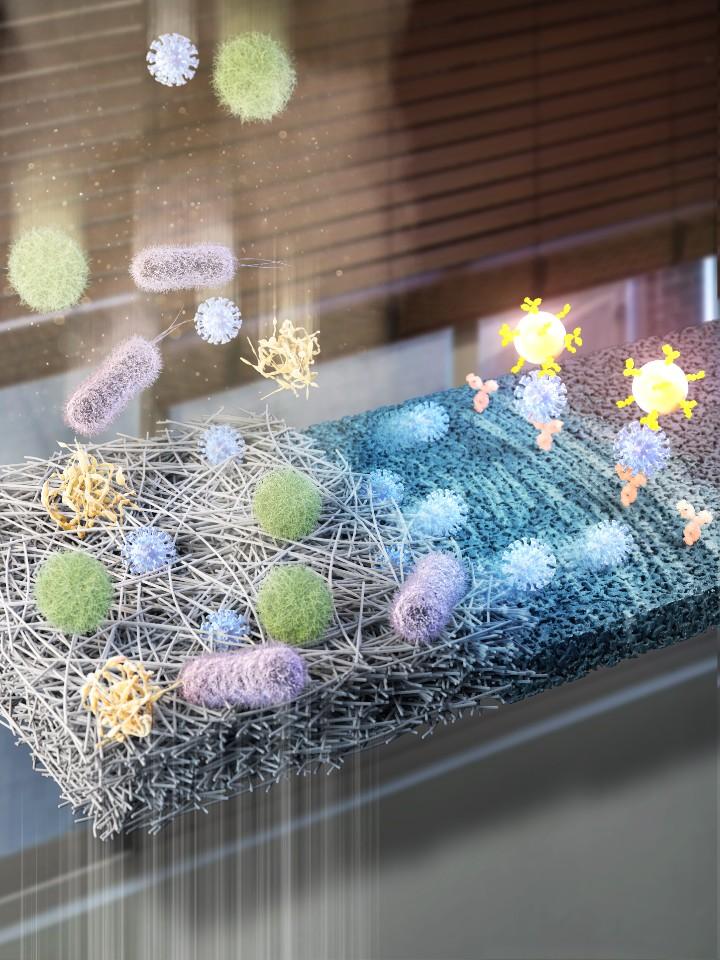 Researchers in South Korea have developed a technology that enables immediate detection of specific airborne viruses in the field. The Korea Institute of Science and Technology (KIST) announced that the collaborative research team led by Dr. Joonseok Lee from Molecular Recognition Research Center, professor Min-Gon Kim from the Department of Chemistry, Gwangju Institute of Science and Technology (GIST), and professor Chan-Seon Song from the Department of Veterinary Medicine, Konkuk University, developed a detection platform that can simultaneously sample and monitor airborne viruses in the field.

Testing the biological hazards such as various bacteria, fungi, and viruses present in the air generally requires collecting the sample air from the field and conducting a separate analysis on the sample in the laboratory. This analysis process may take a few hours to even several days. Although the existing techniques that support on-site analysis without having to transfer the sample back to the laboratory enabled monitoring the concentration of bacteria or fungi, they displayed limitations in distinguishing the specific microorganism existence or being used without further cleaning.

The KIST-GIST collaborative research team developed an integrated sampling/monitoring platform that uses a disposable kit to easily collect and detect airborne viruses on-site. The disposable virus sampling/monitoring kit developed by the team is similar to the pregnancy test kit, and enables completion of both sampling and diagnosing on airborne viruses within 50 minutes on-site (10 to 30 minutes of sampling and 20 minutes of diagnosis) without requiring a separate cleaning or separation process. 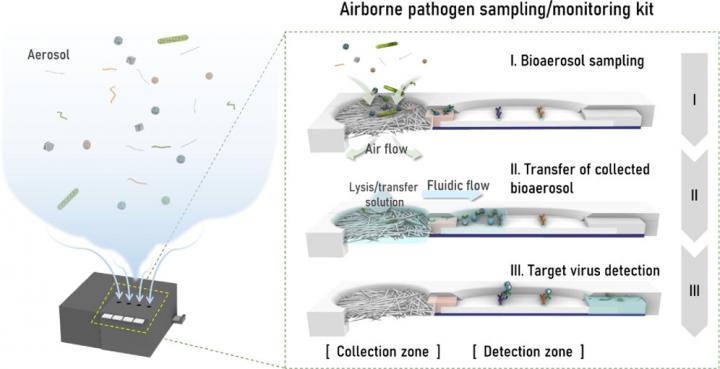 The developed monitoring platform collects and concentrates the airborne virus on a porous glass fiber pad, and then the virus is flowed to the detection zone by a capillary force. The flowed virus is combined with the near-infrared (NIR) emission of synthesized nanoprobes conjugated with antibodies that react only to specific viruses in order to selectively detect the desired viruses even in an environment having simultaneous existence of several types of viruses. In addition, the platform supports injection of more than four kits at once to enable monitoring of multiple virus types at once.

The airborne viruses are affected by external factors such as the indoor space area size, the use of air conditioning system, and temperature and humidity. Thus, the collaborative research team established an artificial aerosolization chamber system that can regulate external factors to verify the developed platform and conducted experiments under certain conditions. The team was able to sample influenza viruses spread out in a large space, concentrate the virus to about more than one million times concentration in a porous pad, and recover the viruses attached to the pad surface with an efficiency of about 82 percent through surface pretreatment and test solution optimization to finally detect the virus in the detection zone.

"This platform supports an immediate analysis on the field collected sample, and it can be implemented as an indoor air pollution monitoring system for diagnosing airborne biological hazards such as the COVID-19 virus," Lee said.

- This press release was supplied by Korea's National Research Council of Science & Technology. It has been edited for style