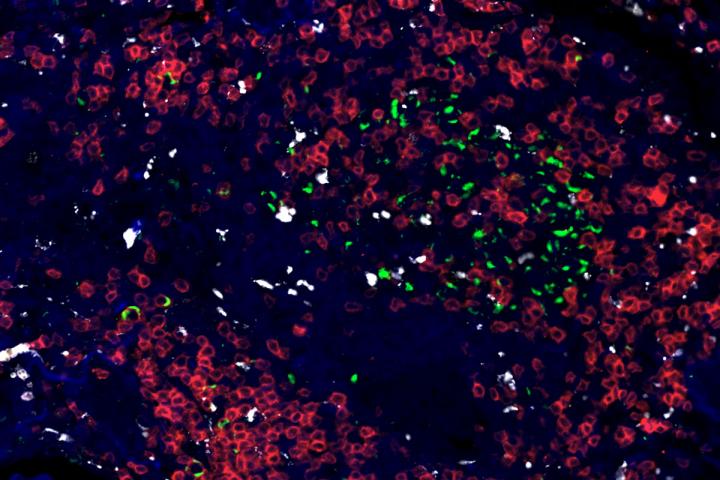 A new study led by Washington University School of Medicine in St. Louis lays out a genetic road map of immune responses to tuberculosis (TB) infection across three species. Pictured is a TB-infected human lung. TB is shown in green, and immune cells surrounding the TB bacteria are shown in red and white.
Khader Lab

Tuberculosis (TB) is one of the world's most vexing public health problems. About 1.5 million people died from this bacterial lung infection in 2018, and the World Health Organization (WHO) estimates that one-quarter of the world's population—some 2 billion people, mostly in developing countries—are infected with the bacteria that causes TB.

For decades, scientists have been studying the deadly disease in mice and other animal models to develop drug therapies and vaccines to treat or prevent the infection. But findings in animals with TB don't always translate well to people with the disease, leaving scientists puzzled by the discrepancies.

Now, a new study led by Washington University School of Medicine in St. Louis offers a genetic road map detailing the similarities and differences in immune responses to TB across three species—mice, macaques, and humans. According to the researchers, the insight into the immune pathways that are activated in diverse models of TB infection will serve as a valuable tool for scientists studying and working to eradicate the disease.

The research, appearing Jan. 29 in the journal Science Translational Medicine, is a collaboration between Washington University; the Texas Biomedical Research Institute in San Antonio; and the University of Cape Town in South Africa.

"For many years, scientists have been frustrated by the fact that animal models of TB—especially the genetically identical mice so often studied—don't really reflect what we see in people with TB infections," said co-senior author Shabaana A. Khader, PhD, a professor of molecular microbiology at Washington University. "This study is important because now we show in great detail where these animal models overlap with humans with TB and where they don't."

Unlike many previous mouse studies, the new research involved genetically diverse mice that more closely recapitulate the wide range of TB infection severity in humans: Some infected individuals show no symptoms; others show intermediate degrees of severity; and still others develop extreme inflammation of the lungs.

With co-author Deepak Kaushal, PhD, at the Texas Biomedical Research Institute, the researchers compared the genetic and immune responses to TB infection in these diverse mice with the responses of TB-infected macaques in the Kaushal lab. And with co-author Thomas J. Scriba, PhD, of the University of Cape Town, the research team analyzed blood samples from adolescents in Western Cape, South Africa, who are enrolled in a clinical trial investigating TB infection. The samples from people allowed the researchers to analyze and compare data from the mice and macaques with a range of responses to TB infection in young people.

Past research from this long-running clinical trial identified a group of 16 genes whose activation patterns predicted the onset of TB disease more than a year before diagnosis. These genes—called a human TB gene signature—differed significantly in their activation patterns between young people who developed symptoms of TB and those who didn't.

Related Article: Pulmonary Tuberculosis Can Be Cured with Shorter Treatment

In macaques, primates closely related to humans, scientists have long assumed that TB infection closely resembles such infection in people.

"Our data demonstrate that 100 percent of the genes previously identified as a human TB gene signature overlap in macaques and people," said co-senior author Makedonka Mitreva, PhD, a professor of medicine and of genetics at Washington University and a researcher at the university's McDonnell Genome Institute. "It's important to have the definitive data showing it to be true."

There was significant overlap between humans and mice as well, according to the researchers, including co-first authors Mushtaq Ahmed, PhD, an assistant professor of molecular microbiology in Khader's lab; Shyamala Thirunavukkarasu, PhD, a staff scientist in Khader's lab; and Bruce A. Rosa, PhD, an assistant professor of medicine in Mitreva's lab. But they also identified genetic pathways that differed between mice and humans, providing detailed analysis of areas where TB in mice is unlikely to point to meaningful insight into human TB infection.

"Until now, we have studied mouse models to understand TB disease progression, not knowing where the mouse disease translates to human disease and where it doesn't," Khader said. "Now, we have shown that many areas do translate but that there are important aspects of TB infection that don't. If you are using mouse models to develop TB vaccines or other therapeutics that target areas that don't overlap, you likely won't succeed."

Added Mitreva, "Our study will inform researchers when they may need to move to a different animal model to study their genetic or molecular pathways of interest."

The researchers studied in detail the genes that increase in expression in people who develop severe TB disease. Of 16 such genes identified in people, they were able to study 12 in mice. Four of the genes could not be studied because mice don't have equivalent versions of such genes or, when such genes were eliminated, the mouse embryos died during development.

The scientists found that the 12 genes fall into three categories: those that provide protection against TB infection; those that lead to greater susceptibility to TB infection; and those that had no effect either way. Such information will be useful in seeking future therapeutics that could, for example, boost effects of protective genes or shut down harmful ones.

According to Khader and Mitreva, their team plans to use the new knowledge to better understand TB infections that have become drug-resistant, a growing problem in places where the disease is endemic. In addition, they will harness the information to help understand why the TB vaccine often administered to high-risk groups of people works well in some individuals but not others.

With the study's raw data publicly available, Khader and Mitreva said they are hopeful it will serve as a valuable resource to TB research and immunology communities worldwide.