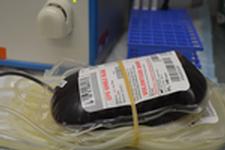 Freezing and reanimating your body is still science fiction, but cryopreserving cells and certain tissues for future use is a reality. Still, the process could use some improvements to make it more useful in emergencies. In a recent study in the journal ACS Omega, scientists take a close look at a new class of small molecules with the potential to make the process more practical and give the cells and tissues a longer shelf life.

Red blood cells, the part of blood involved in transfusions, are probably the best-known example of a body component that is stored for later use. But the most common methods for preserving blood can only save it for 42 days at 4 degrees Celsius, according to Canadian Blood Services. This limitation can lead to a shortage in an emergency situation, when many patients might need transfusions at the same time. Freezing it can make blood last longer, but the process requires adding a protectant such as glycerol to prevent the formation of damaging ice crystals. However, the glycerol must be removed before red blood cells are transfused, and this can take up to an hour, which can be too long when patients are critically injured. So Robert N. Ben and colleagues tested a class of glucose-based molecules that they had previously found to be cryoprotective to see whether the molecules could potentially reduce the time needed to process frozen blood cells.

The researchers showed that two of the molecules in the class were effective at preventing ice from forming in red blood cells frozen at -80 degrees Celsius. Adding the new protectants reduced the needed concentration of glycerol from 40 percent to between 10 percent and 15 percent. Lowering the amount of glycerol could help minimize the time required to prepare thawed red blood cells for transfusion, and thus, be ready for use in patients faster, the researchers say.