May 06, 2015University of Massachusetts Amherst 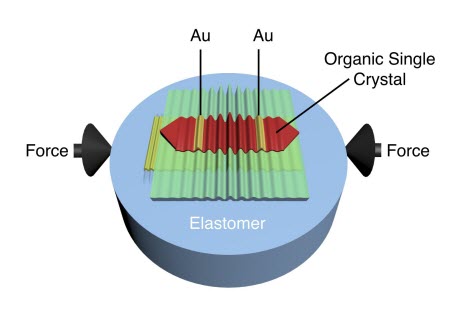 Schematic of wrinkled rubrene single-crystal field-effect transistor. Wrinkles are obtained when in-plane compressive strain is applied on the elastomeric substrate. Electric current between gold (Au) electrodes is modulated by the deformation imposed by the wrinkles.Image courtesy of UMass AmherstAMHERST, Mass. – A revolution is coming in flexible electronic technologies as cheaper, more flexible, organic transistors come on the scene to replace expensive, rigid, silicone-based semiconductors, but not enough is known about how bending in these new thin-film electronic devices will affect their performance, say materials scientists at the University of Massachusetts Amherst.

They are the first to apply inhomogeneous deformations, that is strain, to the conducting channel of an organic transistor and to understand the observed effects, saysReyes-Martinez, who conducted the series of experiments as part of his doctoral work.

As he explains, “This is relevant to today’s tech industry because transistors drive the logic of all the consumer electronics we use. In the screen on your smart phone, for example, every little pixel that makes up the image is turned on and off by hundreds of thousands or even millions of miniaturized transistors.”

“Traditionally, the transistors are rigid, made of an inorganic material such as silicon,” he adds. “We’re working with a crystalline semiconductorcalled rubrene, which is an organic, carbon-based material that has performance factors, such as charge-carrier mobility, surpassing those measured in amorphous silicon. Organic semiconductors are an interesting alternative to silicon because their properties can be tuned to make them easily processed, allowing them to coat a variety of surfaces, including soft substrates at relatively low temperatures. As a result, devices based on organic semiconductors are projected to be cheaper since they do not require high temperatures, clean rooms and expensive processing steps like silicon does.”

Until now, Reyes-Martinez notes, most researchers have focused on controlling the detrimental effects of mechanical deformation to atransistor’s electrical properties. But in their series of systematic experiments, the UMass Amherst team discovered that mechanical deformations only decrease performance under certain conditions, and actually can enhance or have no effect in other instances.

“Our goal was not only to show these effects, but to explain and understand them. What we’ve done istake advantage of the ordered structure of ultra-thin organic single crystals of rubrene to fabricate high-perfomance, thin-film transistors,” he says. “This is the first time that anyone has carried out detailed fundamental work at these length scales with a single crystal.”

Though single crystals were once thought to be too fragile for flexible applications, the UMass Amherst team found that crystals ranging in thickness from about 150 nanometers to 1 micrometer were thin enough to be wrinkled and applied to any elastomer substrate. Reyes-Martinez also notes, “Our experiments are especially important because they help scientists working on flexible electronic devices to determine performance limitations of new materials under extreme mechanical deformations, such as when electronic devices conform to skin.”

They developed an analytical model based on plate bending theoryto quantifythe different local strains imposed on the transistor structure by the wrinkle deformations. Using their model they are able to predict how different deformations modulate charge mobility, which no one had quantified before, Reyes-Martinez notes.

These contributions “represent a significant step forward in structure-function relationships in organic semiconductors, critical for the development of the next generation of flexible electronic devices,” the authors point out.