LAWRENCE — A group of scientists offers photographic proof of climate change using images of retreating glaciers in a new paper, “Savor the Cryosphere,” appearing in GSA Today, a peer-reviewed publication of the Geological Society of America. 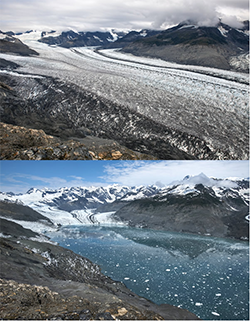 Retreat of the Columbia Glacier, Alaska, ~6.5 km between 2009 and 2015.Photo Credit: James Balog and the Extreme Ice SurveyAlong with Gregory Baker, adjunct professor of geology at the University of Kansas, co-authors include an Emmy Award-winning documentarian and a prominent environmental author. Aimed at a broad audience, their new paper already has been covered by news outlets like the Washington Post and the Associated Press.

“We have unretouched photographic evidence of glaciers melting all around the globe,” said Baker, whose research career centers on geophysical imaging of Earth’s subsurface and geoscience education. “That includes the ice sheets of Greenland and Antarctica—they’re reduced in size. These aren’t fancy computer models or satellite images where you’d have to make all kinds of corrections for the atmosphere. These are simply photos, some taken up to 100 years ago, and my co-authors went back and reacquired photos at many of these locations. So it’s just straightforward proof of large-scale ice loss around the globe.”

Accompanying the photos, the authors offer a concise overview of their own scholarly work on the retreat of glaciers, mostly stripped of the kind of jargon that can make such work impenetrable to the public-at-large.

“All the new science in the paper comes from the authors’ previous work but is summarized,” Baker said. “It’s designed to be a more accessible compilation of some pretty dense scientific publications by the authors. The documentary maker of "Chasing Ice," James Balog, is one of the authors on this paper. He contributed photographs from the Extreme-Ice Survey. One of the others is Richard Alley, who wrote a popular book called ‘The Two-Mile Time Machine.’ He was one of the early people to get ice cores from Greenland and demonstrate how within ice cores there are bubbles of ancient atmosphere that can tell you something about the past.” 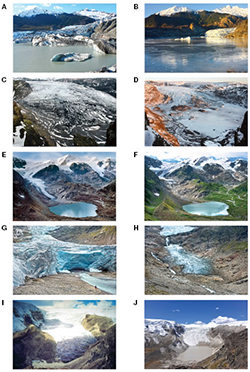 The remaining co-authors of the paper are Patrick Burkhart of Slippery Rock University, Lonnie Thompson of the Byrd Polar Research Center at Ohio State University, and Paul Baldauf of Nova Southeastern University.

The team hopes the paper will aid in boosting public awareness of the dire implications of dwindling glaciers around the world. “This loss of ice has implications to rising sea level, greater susceptibility to dryness in places where people rely upon rivers delivering meltwater resources and to the destruction of natural environmental archives that were held within the ice,” they wrote.

Indeed, the team titled the paper “Savor the Cryosphere” to highlight the dependence of humanity upon the world’s glaciers (aka the cryosphere).

“We have all heard of the impact of melting ice on sea level rise, but the public also need to be aware that places around the world depend on glaciers for their water and are going to come under increasing stress, and we already see how water shortages lead to all kinds of conflict,” Baker said. “The other critical point often overlooked is that when glaciers melt we’re losing these scientific archive records of past climate change at specific locations around the Earth, as if someone came in and threw away all your family photos.”

Indeed, the KU researcher explained that in addition to the challenges humanity faces in rising sea levels and changes to river systems, the reduction in the cryosphere could erase some of the best-known scientific records of changes in Earth’s atmosphere.

Related Article: Mountain Glaciers Are Showing Some of the Strongest Responses to Climate Change

“Glacier ice contains fingerprint evidence of past climate and past biology, trapped within the ice,” Baker said. “Analyzing ice cores is one of the best ways to analyze carbon dioxide in the past, and they contain pollen we can look at to see what kind of plant systems may have been around. All of this information has been captured in glaciers over hundreds of thousands of years, and sometimes longer—Greenland and Antarctica cover perhaps up to a million years. The more that glacial ice melts, the more we’re erasing these historical archives that we may not have measured yet in some remote glaciers, or deep in ice caps, that can tell us the history of the Earth that will be gone forever.”

Baker’s enthusiasm for communicating such scientific information to the public extends beyond academic journals and campus classes. He’ll soon travel to Washington, D.C., to participate in the flagship March for Science, an event that aims to boost “the global movement to defend the vital role science plays in everyday life, including in health, safety, economies, and governments.”

“Speaking for myself and not KU, when my great-grandkids are around, I’d want them to be able to say, ‘My great-grandfather marched because he was trying to not have people repeat mistakes of the past,’” he said. “To me, we have this history that when science comes up against profit or power, that’s when evidence-based decision making really seems to go awry.” 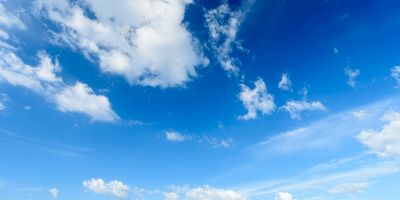 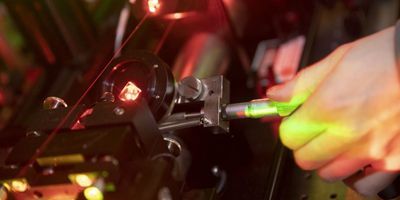 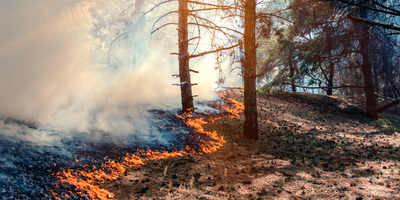 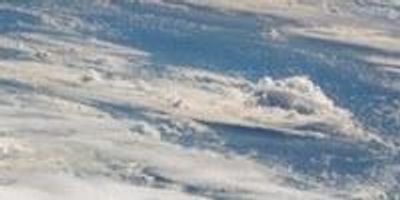 Researchers Provide New Evidence on the Reliability of Climate Modeling

Researchers Provide New Evidence on the Reliability of Climate Modeling