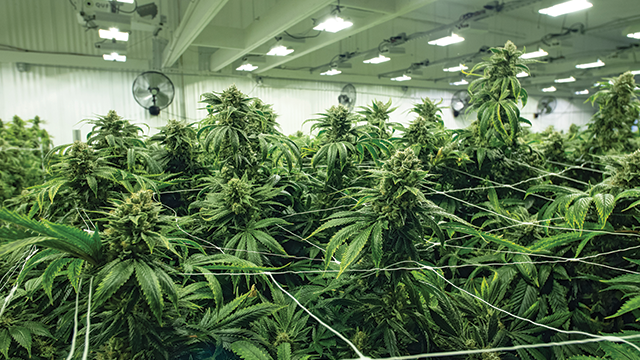 Cannabis cultivation could have a significant effect on groundwater and surface water resources when combined with residential use, evidence from a new study suggests.

Researchers in Canada and the US investigated potential reductions in streamflow, caused by groundwater pumping for cannabis irrigation, in the Navarro River in Mendocino County, California, and contextualized it by comparing it with residential groundwater use.

Reporting their findings in the journal Environmental Research Communications, they note that the combination of cannabis cultivation and residential use may cause significant streamflow depletion, with the largest impacts in late summer when streams and local fish species depend most on groundwater inflows.

Dr. Sam Zipper, from the University of Kansas, USA, is the study's lead author. He said: "Cannabis is an emerging agricultural frontier, but thanks to its long illegal and quasi-legal history, we know very little about the impacts of cannabis cultivation on water resources.

"What we do know is that there has been a big increase in cannabis cultivation in in recent years. Researchers have found that the area under cultivation in Mendocino and Humboldt counties nearly doubled between 2012 and 2016.

"It has often been assumed most cannabis cultivators irrigate using surface water. But recent evidence from Northern California shows that groundwater is the primary irrigation water supply in this region. That means it is essential to understand how groundwater pumping for cannabis cultivation affects water resources, particularly given that regulations governing cannabis legalization and management are currently being debated and designed in many US states."

They found that both cannabis and residential groundwater use can cause significant streamflow depletion in streams with high salmon habitat potential in the Navarro River Watershed, with shifting drivers of impacts and implications through time.

Dr. Zipper said: "Cannabis groundwater pumping has an important impact on streamflow during the dry season. But it is dwarfed by streamflow depletion caused by residential groundwater use, which is five times greater.

"However, cannabis pumping is a new and expanding source of groundwater depletion, which may further deplete a summer baseflow already stressed by residential water use and traditional agriculture."

The groundwater withdrawals at each residence or cannabis cultivation site were relatively small compared to irrigation for row crops like corn. However, with over 300 groundwater-irrigated cannabis cultivation sites and over 1300 residences in the Navarro River Watershed, these relatively small withdrawals added up to a significant impact on local streams.

"This study shows that it is not just big agriculture in the Central Valley that have potential to deplete streamflow by pumping groundwater," states co-author Dr. Jeanette Howard, from The Nature Conservancy California. "We showed that even in watersheds where there aren't big groundwater pumpers, that the cumulative impacts of many small groundwater pumpers has the potential to negatively impact stream flow."

Dr. Zipper concluded: "Our results indicate that the emerging cannabis agricultural frontier is likely to increase stress on both surface water and groundwater resources, and groundwater-dependent ecosystems, particularly in areas already stressed by other groundwater users. Further residential development may have a similar effect. This study illustrates a valuable approach to assess potential for surface water depletion associated with dispersed groundwater pumping in other watersheds where this may be a concern.

"The ongoing legalisation of cannabis will require management approaches which consider the connection between groundwater and surface water to protect other water users and ecosystem needs."