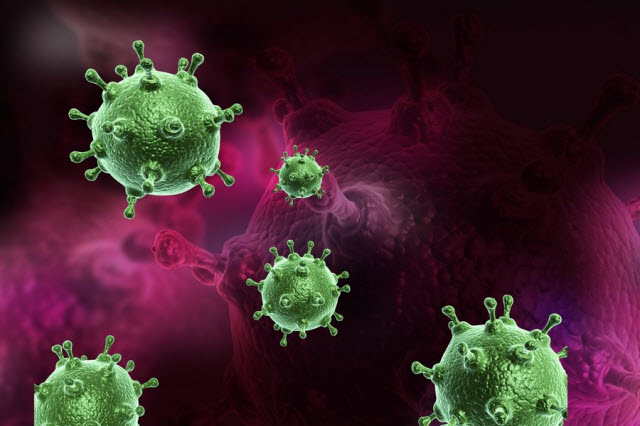 The influenza virus initially cheats the immune mechanism, which enables it to spread before being detected. Image Courtesy of: Aarhus University

Influenza is able to mask itself, so that the virus is not initially detected by our immune system. This is the result of new research from Aarhus University. The researchers behind the study hope that the discovery can be used to develop better treatment against influenza and chronic inflammation conditions such as rheumatoid arthritis.

Some years ago researchers discovered that the immune system can already track viruses and alert the body as soon as a virus enters human cells to multiply. But new research now reveals that the influenza virus cheats the mechanism and is thus able to circumvent the body's advanced defence system.

Related Article: Researchers Find That Influenza Has an Achilles’ Heel

"The virus contains a protein that masks the virus entering the cell. In this way, the influenza virus can spread more easily before the immune system recognises that it is a virus and attempts to fight it," says Associate Professor Christian Holm from the Department of Biomedicine at Aarhus University.

Together with Professor Søren R. Paludan, he has headed the research project, which has also comprised contributions from other researchers at Aarhus University and from a number of American universities. Their discovery has recently been published in the scientific journal Nature Communications.

Impairs defence against viruses in general

The influenza virus has developed this weapon against the immune system through evolution. The researchers discovered the mechanism by giving cells in the laboratory an evolutionarily conserved influenza virus protein. The result was that the cells became poorer at defending themselves against both influenza viruses and other types of viruses.

"This indicates that the recognition mechanism in the immune system that the influenza virus evades is generally important for the body's ability to defend itself against viruses. It is therefore important basic research knowledge for us. The more knowledge we have about why a virus becomes dangerous, the easier it is to develop treatments," explains Associate Professor Christian Holm.

Suppressed immune system can also be an advantage

The little protein that is able to mask the influenza virus from the immune system is not only interesting in relation to combating influenza. It may be possible to use it to combat autoimmune diseases such as rheumatoid arthritis, as well as the relatively rare disease lupus, which to a great extent affects young women. In these diseases, the immune system attacks healthy cells and tissues-though the reasons for this are unknown-and creates chronic inflammation.

"The protein's immunosuppressant effect can possibly be used to develop better treatments for these types of diseases, where the immune system is chronically overactive. By suppressing the immune system's reaction, the symptoms can be reduced. The results of our research can also be used to examine this in more detail," says Christian Holm.

About the research project

The project was carried out by the Aarhus Research Center for Innate Immunology in collaboration with researchers from the USA and from Science and Technology at Aarhus University, including Senior Researcher Mogens Duch and Associate Professor Rune Hartmann.
The project is financed by the Danish Council for Independent Research's Sapere Aude programme (DFF--Research Talents), The Novo Nordisk Foundation, The Lundbeck Foundation, Aase and Ejnar Danielsen's Foundation, The Danish Rheumatism Association, Oda and Hans Svenningsen's Foundation and the Foundation for the Promotion of the Medical Sciences.
Read more