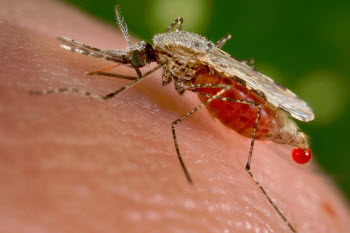 Research at the Texas Biomedical Research Institute will allow scientists to improve their ability to characterize malaria parasites infecting patients.Jim Gathany, Centers for Disease Control and Prevention via Wikimedia CommonsSAN ANTONIO (December 9, 2014) – The National Institutes of Health (NIH) awarded Texas Biomedical Research Institute staff scientist Ian Cheeseman, Ph.D., over $450,000 in first-year funding and is expected to receive up to $1.8 million over four years to continue research into a new method for sequencing the genomes of individual malaria parasites, which he and colleagues at Texas Biomed developed and announced earlier this year in the journal Genome Research.

"We think about these infections as containing the sort of diversity you would see in a human village," Cheeseman said. "We could previously only look at the village as a whole, but new technology developed here at Texas Biomed now allows us to identify everyone in the village directly."

Single cell genomics was pioneered in cancer research to identify how tumors evolve during the progression of a disease, but it has been difficult to adapt them to other organisms, according to Cheeseman.

"One of the major surprises we found when we started looking at individual parasites instead of whole infections was the level of variation in drug resistance genes," said Shalini Nair, a colleague of Cheeseman’s in the Department of Genetics at Texas Biomed. "The patterns we saw suggested that different parasites within a single malaria infection would react very differently to drug treatment."

According to the World Health Organization, malaria remains the world’s deadliest parasitic disease, killing 627,000 people in 2012, many of whom were children younger than five.

"We’re now able to look at malaria infections with incredible detail," Cheeseman added. "This will help us understand how to best design drugs and vaccines to tackle this major global killer."

"To be able to embark on such a well-supported research project so early in my career is a phenomenal boost," remarked Cheeseman, whose early research was supported by Texas Biomedical Forum funding.