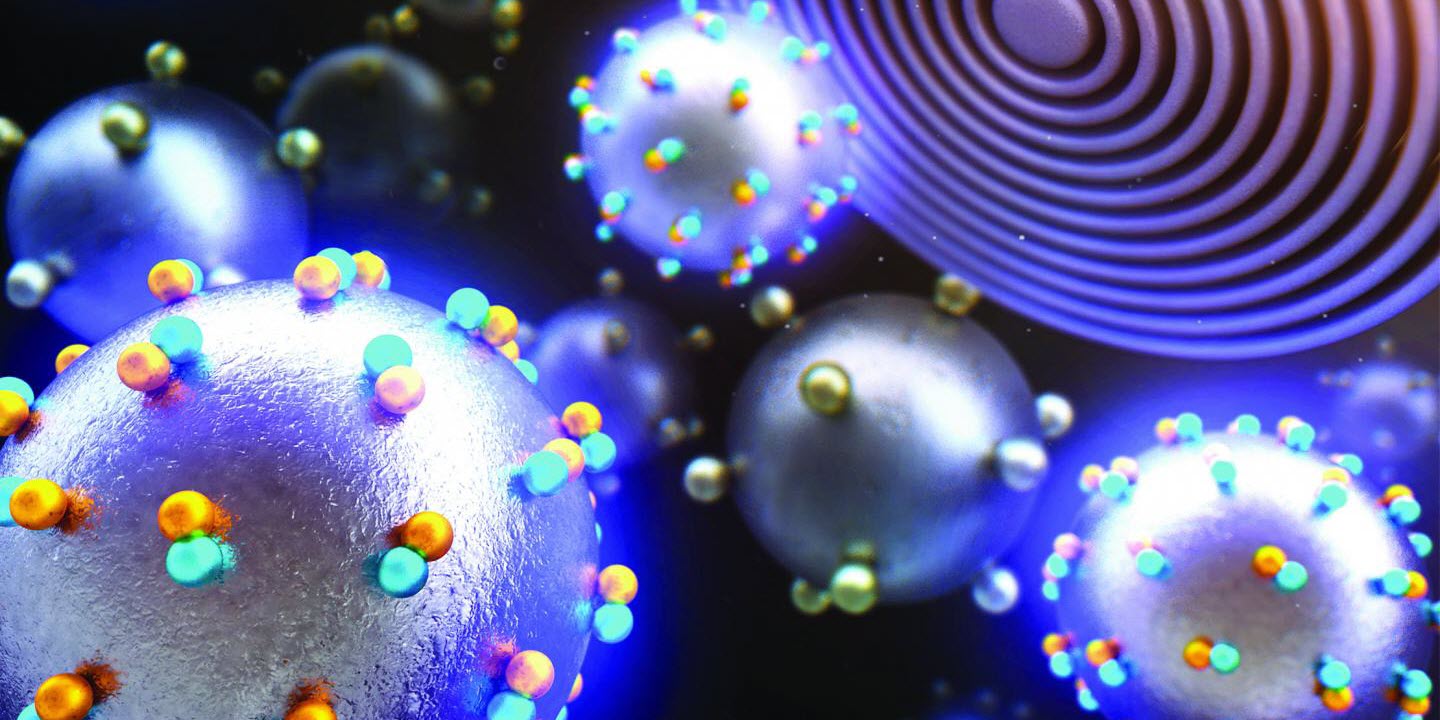 At the COSMIC Microscopy beamline, researchers probed the oxidation state of the chemical element cerium using scanning transmission X-ray microscopy (STXM) under operando conditions. It was a first demonstration of this capability at COSMIC. The results confirmed how cerium particles dictated the size and locations of the reaction sites of platinum particles. In this artistic depiction, hybrid CeOX-TiO2 nanoparticles (silver spheres) are shown evenly covered with platinum and cerium pairs (yellow and blue) while conventional titanium dioxide particles are shown less densely covered with larger platinum clusters (gold).
Chungnam National University

COSMIC, a multipurpose X-ray instrument at Lawrence Berkeley National Laboratory's (Berkeley Lab's) Advanced Light Source (ALS), has made headway in the scientific community since its launch less than two years ago, with groundbreaking contributions in fields ranging from batteries to biominerals.

COSMIC is the brightest X-ray beamline at the ALS, a synchrotron that generates intense light—from infrared to X-rays—and delivers it to dozens of beamlines to carry out a range of simultaneous science experiments. COSMIC's name is derived from coherent scattering and microscopy, which are two overarching X-ray techniques it is designed to carry out.

Its capabilities include world-leading soft X-ray microscopy resolution below 10 nanometers (billionths of a meter), extreme chemical sensitivity, ultrafast scanning speed as well as the ability to measure nanoscale chemical changes in samples in real time, and to facilitate the exploration of samples with a combination of X-ray and electron microscopy. Soft X-rays represent a low range in X-ray energies, while hard X-rays are higher in energy. Each type can address a different range of experiments.

COSMIC is setting the stage for a long-term project to upgrade the decades-old ALS. The effort, known as the ALS Upgrade (ALS-U), will replace most of the existing accelerator components with state-of-the-art technology, ensuring capabilities that will enable world-leading soft X-ray science for years to come. The upgrade will also further enhance COSMIC's ability to capture nanoscale details in the structure and chemistry of a broad range of samples.

The expected 100-fold increase in X-ray brightness that ALS-U will deliver will provide a similar increase in imaging speed at COSMIC, and a more than threefold improvement in imaging resolution, enabling microscopy with single-nanometer resolution. Further, the technologies being developed now at COSMIC will be deployed at other beamlines at the upgraded ALS, making possible microscopy with higher X-ray energies for many more experiments. The instrument is one of many highly specialized resources available to scientists from around the world for free through a peer-reviewed proposal process.

A journal article, published Dec. 16, 2020, in Science Advances, highlights some of COSMIC's existing capabilities and those that are on the way. The paper offers examples of eight-nanometer resolution achieved in imaging magnetic nanoparticles, the high-resolution chemical mapping of a battery cathode material during heating, and the high-resolution imaging of a frozen-hydrated yeast cell at COSMIC. (A cathode is one type of battery electrode, a component through which current flows.) These results serve as demonstration cases, revealing critical information about the structure and inner workings of these materials and opening the door for further insights across many fields of science.

Another journal article, published Jan. 19, 2021), in Proceedings of the National Academy of Sciences, demonstrated the first-ever use of X-ray linear dichroic ptychography, a specialized high-resolution imaging technique available at COSMIC, to map the orientations of a crystal known as aragonite that is present in coral skeletons at 35-nanometer resolution. The technique shows promise for mapping other biomineral samples at high resolution and in 3D, which will provide new insights into their unique attributes and how to mimic and control them. Some biominerals have inspired humanmade materials and nanomaterials due to their strength, resilience, and other desirable properties.

"We use this user-friendly, unique platform for materials characterization to demonstrate world-leading spatial resolution, in conjunction with operando and cryogenic microscopy," said David Shapiro, the paper's lead author and the lead scientist for COSMIC's microscopy experiments. He also leads the ALS Microscopy Program. "Operando" describes the ability to measure changes in samples as they are occurring.

"There's no other instrument that has these capabilities co-located for X-ray microscopy at this resolution," Shapiro said. COSMIC can provide new clues to the nanoscale inner workings of materials, even as they actively function, that will lead to a deeper understanding and better designs—for batteries, catalysts, or biological materials. Equipping COSMIC with such a diversity of capabilities required an equally broad collaboration across scientific disciplines, he noted.

Several advanced technologies developed by different groups were integrated into this one instrument. Key to the demonstrations at COSMIC reported in the paper is the implementation of X-ray ptychography, which is a computer-aided image reconstruction technique that can exceed the resolution of conventional techniques by up to about 10 times.

With traditional methods, spatial resolution—the ability to distinguish tiny features in samples—is limited by the quality of the X-ray optics and their ability to focus the X-ray beam into a tiny spot. But conventional X-ray optics, which are the instruments used to manipulate X-ray light to see samples more clearly, are difficult to make, inefficient, and have short focal lengths.

Instead of relying on imperfect optics, ptychography records a large number of physically overlapping diffraction patterns—which are images produced as X-ray light scatters from the sample—each offering a small piece of the full picture. Rather than being limited by optics quality, the ptychography technique is limited by the brightness of the X-ray source—precisely the parameter that ALS-U is expected to improve a hundredfold. To capture and process the enormous amount of data and reconstruct the final image requires data processing facilities, computer algorithms, and specialized fast pixel detectors like those developed at Berkeley Lab.

"X-ray ptychography is a detector-enabled technique—first deployed with hard (high-energy) X-rays using hybrid pixel detectors, and then at the ALS with the FastCCD we developed," said Peter Denes, the ALS detector program lead who worked with lead engineer John Joseph on the implementation at COSMIC. "Much of the COSMIC technology benefited from the Laboratory Directed Research and Development (LDRD) Program, as did the FastCCD, which translated tools for cosmology into COSMIC observations." Berkeley Lab's LDRD Program supports innovative research activities that keep the Lab at the forefront of science and technology.

Ptychography utilizes a sequence of scattering patterns, produced as X-ray light scatters from a sample. These scattering patterns are analyzed by a computer running high-performance algorithms, which convert them into a high-resolution image. 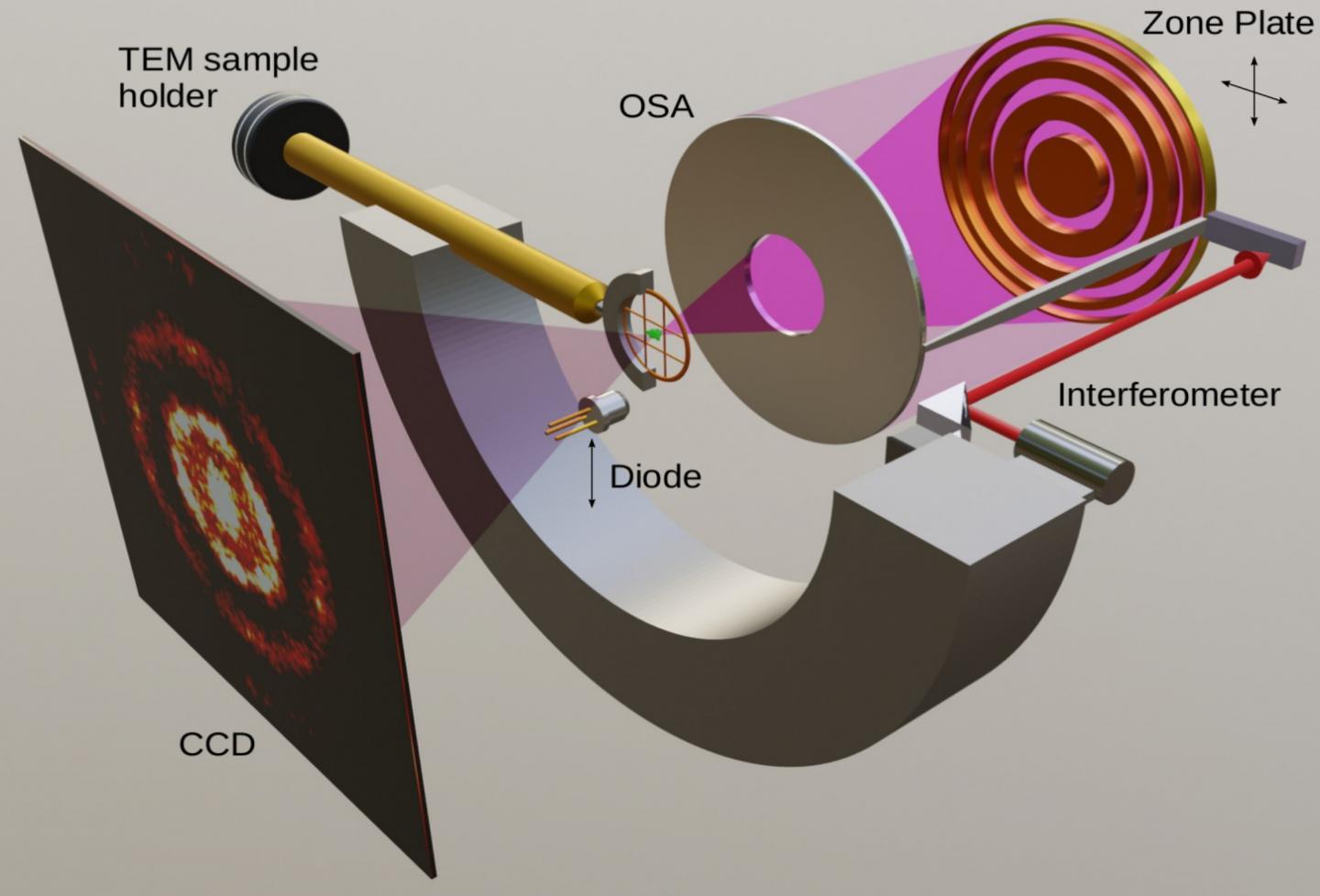 A conceptual drawing of the COSMIC microscope, with X-rays shown in purple. All equipment is mounted to a central cylinder. The zone plate, a type of X-ray optic, is scanned relative to this cylinder while the sample is held stationary. The instrument allows for rapid switching between conventional microscopy and an enhanced imaging technique called ptychography.
Lawrence Berkeley National Laboratory

In the Dec. 16, 2020, paper, researchers highlighted how ptychographic images made it possible to see the high-resolution chemical distribution in microscopic particles of a lithium iron phosphate battery cathode material (Li0.5FePo4). The ptychographic images showed nanoscale chemical features in the interior of the particles that were not visible using the conventional form of the imaging technique, called spectromicroscopy.

In a separate demonstration of ptychography at COSMIC, researchers noted chemical changes in a collection of LixFePO4 nanoparticles when subjected to heating.

Ptychography is also a source of COSMIC's heavy data demands. The beamline can produce several terabytes of data per day, or enough to fill a few laptop computers. The intensive computations required for COSMIC's imaging necessitate a dedicated cluster of GPUs (graphical processing units), which are specialized computer processors.

The ALS Upgrade will further drive its data demands up to an expected 100 terabytes per day, Shapiro noted. Plans are already being discussed for using more resources at Berkeley Lab's National Energy Research Scientific Computing Center (NERSC) to accommodate this pending ramp-up in data.

COSMIC is a stellar example of Berkeley Lab's Superfacility Project, which is designed to link light sources like the ALS and cutting-edge instrumentation including microscopes and telescopes with data and high-performance computing resources in real time, said Bjoern Enders, a data science workflows architect in NERSC's Data Science Engagement Group.

"We love data and computing challenges from instruments like COSMIC that venture beyond facility borders," Enders said. "We are working toward a future where it will be as easy as a button click to use NERSC's resources from a beamline." The addition of the new Perlmutter supercomputer at NERSC, he added, "will be an ideal partner for COSMIC in team science."

COSMIC started up in commissioning mode in March 2017, and opened to general scientific experiments about two years ago. Since this time, instrument staff have  launched the operando capabilities that measure active chemical processes, for example, and rolled out linear and circular dichroic microscopy and tomography capabilities that further extend COSMIC's range of imaging experiments.

Its coherent scattering branch is now undergoing testing and is not yet available to external users. Work is also in progress to correlate its X-ray microscopy results with electron microscopy results for active processes, and to further develop its cryogenic capabilities, which will allow biological samples and other soft materials to be protected from damage by the ultrabright X-ray beam while they are being imaged. The combination of X-ray and electron microscopy can provide a powerful tool for gathering detailed chemical and structural information on samples, as demonstrated in an experiment involving COSMIC that was highlighted in the journal Science Advances.

Shapiro noted that there are plans to introduce a new experimental station to the beamline, timed with ALS-U, to accommodate more experiments.

One secret to COSMIC's success is that the instrument is designed for compatibility with standard sample-handling components. Shapiro said this user-friendly approach "has been really important for us," and makes it easier for researchers from academia and industry to design COSMIC-compatible experiments. "Users can just show up and plug (the samples) in. It increases our reach, scientifically," he said.

While COSMIC is loaded with features, it isn't bulky, and Shapiro described it as "streamlined in size and cost." He said he hopes it will be a model for future beamlines, both at ALS-U and at other synchrotron facilities.

"I think what is really attractive about it is that it is a very compact instrument. It is high-performance and very stable," he said. "It is very manageable and not very expensive. In that sense it should be very attractive for synchrotrons."

- This press release was originally published on the Berkeley Lab News Center webpage. It has been edited for style