Mar 31, 2020|4 min readCAGE-Center for Arctic Gas Hydrate, Climate and Environment
Novel geochemical measurements help scientists reconstruct the past intensity of the methane seeps in the Arctic Ocean. They indicate a strong methane fluctuation, responding to known periods of abrupt cooling and warming at the end of the last glacial cycle.
CAGE Center for Arctic Gas Hydrate, Environment and Climate

Past records of methane release are crucial for understanding future climate changes. Methane is a potent greenhouse gas that has had significant impact on climate changes in the geological past.

"Previously, when dating the natural release of methane, we used to measure mostly carbon isotopes. But now we know that carbon isotopes alone can't tell us the full story of past emissions of this greenhouse gas," says professor Giuliana Panieri, from the CAGE Centre for Arctic Gas Hydrate, Environment and Climate at UiT The Arctic University of Norway.

Panieri is a micropaleontologist and co-author of a new study in Scientific Reports showing a new approach to geochemical measurements.

Measuring carbon isotopes is a very important method within climate sciences. Carbon, found in all living things, is absorbed over time in a particular fashion by organisms in nature. For instance, carbon found in methane (CH4) in the ocean, is absorbed in the shells of tiny organisms called foraminifera, leaving isotopic clues.

Foraminifera, found in all of the world's oceans, are excellent carriers of information. They inhabit methane seeps and their shells are preserved as fossils in ocean sediments.

Through some geochemical detective work, and a mass spectrometer, scientists can interpret the amounts of the carbon isotope δ13C in the shells and reconstruct past methane emissions. If δ13C values in the fossilized shells are depleted the methane was present in the environment when the shell was deposited.

How intense was the release? 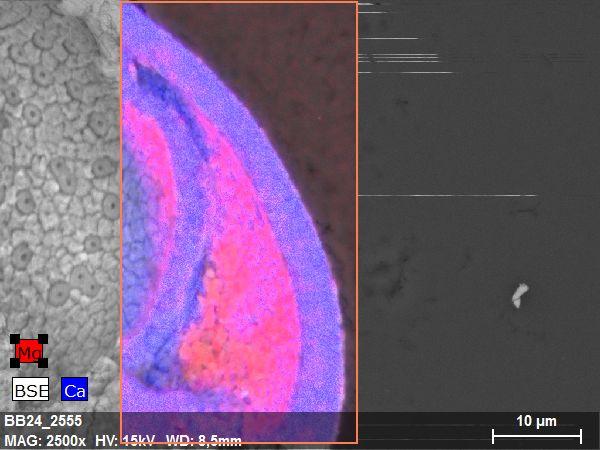 The foraminifera shell with secondary overgrowth (pink), a carbonate deposit that was previously considered to be sample contamination. In fact, it provides scientists with an enormous amount of information regarding methane emissions from the ocean floor.
Chiara Borrelli

The study in Scientific Reports highlights the potential of sulfur isotopic signature (δ34S) in foraminifera, as a novel tool for reconstructing the intensity of CH4 emissions in geological records. This can also, indirectly, help date the release.

"This is the first time that sulfur isotopes are measured in foraminiferal shells from methane seeps. The samples were collected from a well-known site of present-day methane release, Vestnesa Ridge. Here, gas has been seeping into the ocean at least from the Last Glacial Maximum: some 20,000 to 5,000 years ago," says Panieri.

"How did methane in the sub-seabed respond to previous global warmings? Was it merely bubbling up, or was it released in a constant and abrupt jet, strongly emitted into the water column?"

These questions are important in the provinces of large gas hydrate accumulations, such as Vestnesa Ridge.

Gas hydrate is an icy form of methane, trapped in a cage of frozen water and kept contained in the ocean sediments in low temperatures and under high pressure. However, hydrates are susceptible to melting if these conditions are not met—for example, if the ocean temperature changes due to the warming of the waters. The stability of gas hydrates is under intense investigation because of the possible effects of climate change on gas hydrate dissociation.

"The combination of carbon, oxygen, and sulfur isotopes found in foraminifera allows us to reconstruct the flux of methane released in the geological past. This represents a fundamental advancement in studies of past climate. It offers the opportunity to study the connection between methane seepage, climate, and underlying tectonic processes with a new degree of confidence," says Chiara Borrelli, first author of the study and researcher in the Department of Earth and Environmental Sciences at the University of Rochester in the US.

"Our study shows that there was a strong methane fluctuation at the sampling site, responding to known periods of abrupt cooling and warming, at the end of the last glacial cycle."

What was the source of methane?

Carbon isotopes can tell scientists whether methane was present in the water column at a certain time. But they cannot tell them if the methane was released from melting hydrates. However, the traces of oxygen isotopic signature δ18O in benthic foraminifera can, as shown in a newly published study by Dessandier et al. in Geo-Marine letters.

"If we have a large amount of δ18O in the foraminiferal shells, we can say that the source of methane is the gas hydrate dissociation," says Panieri, who also co-authored this paper.

"We found a significant enrichment of δ18Oin all foraminifera samples characterized by depleted δ13C. These results mainly come from the precipitation of authigenic carbonates around the foraminiferal shells, so-called secondary overgrowth. These methane-derived carbonates are characterized by a heavy oxygen isotopic signature. This signature can only be explained by dissociation of gas hydrates because gas hydrates are naturally enriched in 18O due to their ice-like physical properties." according to Pierre-Antoine Dessandier, a postdoc at CAGE and first author of the study.

Dessandier points out that both δ13C and δ18O clues have to be followed, to decipher the dynamic and the source of the methane release from the Arctic Ocean floor.

Vestnesa Ridge is a very well-investigated site of methane release, a laboratory for modern-day release of methane from gas hydrates, but also for micropaleontology. It is one of the major sites of research for CAGE.

The exhaustive research on the site has resulted in many scientific breakthroughs in micropaleontology.

"Consider secondary overgrowth on foraminiferal shells: It is a minuscule carbonate deposit. Before CAGE it was considered to be a contaminant in the samples. But new technology opens new doors. We have discovered that the presence of the secondary overgrowth in itself is an indicator of methane release. Something that previously was considered an interference, and caused samples to be thrown out with the thrash, is, in reality, an unknown book, containing enormous amounts of information in itself." says Panieri.

The new geochemical measurement methods are now added to the toolbox for future micropaleontological research.

"The new isotopic measurements give us a possibility to investigate questions regarding climate change that we today don't even know that we need to ask. The methods can be applied on both secondary overgrowth and shells themselves, and will be enormously important in future research."

- This press release was originally published on the CAGE website