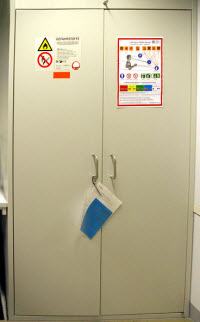 Normally hazardous chemicals are kept in reinforced, fireproof cabinets like this one. That wasn't the case with 4,000 containers of chemicals recently discovered in the Seattle home of a research chemist.MATYLDA SEK, WIKIMEDIA COMMONSFour thousand containers of about 40 different types of dangerous chemicals were found and eventually removed by federal authorities after an inspection by the U.S. Environmental Protection Agency (EPA). Many of those containers weren’t labelled or stored correctly and some were leaking.

The USA Today article said that there had been a chemical company registered to the home’s address that closed in 1992, according to records from the Washington State Department of Revenue. Apparently, one of the home’s residents, a 91-year-old man, is a research chemist who told investigators that he didn’t feel the chemicals put his neighbors, himself, or his 90-year-old sister who also lives in the home at risk.

"If there was a fire here, then the fire would have been much worse because of the types of chemicals and the volume of chemicals," EPA’s on-scene coordinator Jeffrey Rodin told USA Today. "And some of the chemicals could have potentially triggered the fire if containers had deteriorated any further."

Neighbors had no clue about the chemicals' existence.

"I knew nothing at all," neighbor Rodger Webster said to USA Today. "I had maybe twice talked to him."

It took investigators nearly ten days to clean up and safely remove the chemicals. As of April 17, it had not been decided whether or not to lay criminal charges against the home’s residents. They will, however, be given the bill for cleanup, but taxpayers will end up covering the costs if the two residents are unable to.

- With files from USA Today