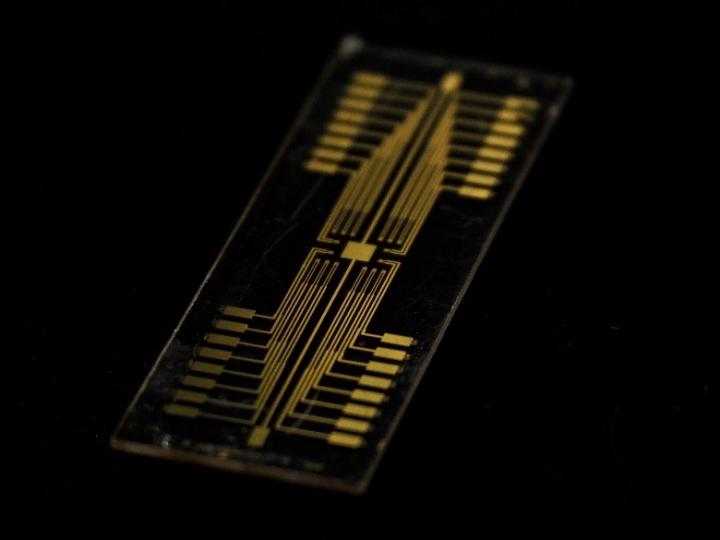 A neuromorphic device used in this study.
Shunsuke Yamamoto

"Neuromorphic" refers to mimicking the behavior of brain neural cells. When one speaks of neuromorphic computers, they are talking about making computers think and process more like human brains-operating at high-speed with low energy consumption.

Despite a growing interest in polymer-based neuromorphic devices, researchers have yet to establish an effective method for controlling the response speed of devices. Researchers from Tohoku University and the University of Cambridge, however, have overcome this obstacle through mixing the polymers PSS-Na and PEDOT:PSS, discovering that adding an ion conducting polymer enhances neuromorphic device response time.

Polymers are materials composed of long molecular chains and play a fundamental aspect in modern life from the rubber in tires, to water bottles, to polystyrene. Mixing polymers together results in the creation of new materials with their own distinct physical properties.

Most studies on neuromorphic devices based on polymer focus exclusively on the application of PEDOT: PSS, a mixed conductor that transports both electrons and ions. PSS-Na, on the other hand, transports ions only. By blending these two polymers, the researchers could enhance the ion diffusivity in the active layer of the device. Their measurements confirmed an increase in device response time, achieving a five-time shorting at maximum. The results also proved how closely related response time is to the diffusivity of ions in the active layer.

"Our study paves the way for a deeper understanding behind the science of conducting polymers," explains co-author Shunsuke Yamamoto from the Department of Biomolecular Engineering at Tohoku University's Graduate School of Engineering. "Moving forward, it may be possible to create artificial neural networks composed of multiple neuromorphic devices," he adds.

- This press release was originally published on the Tohoku University website