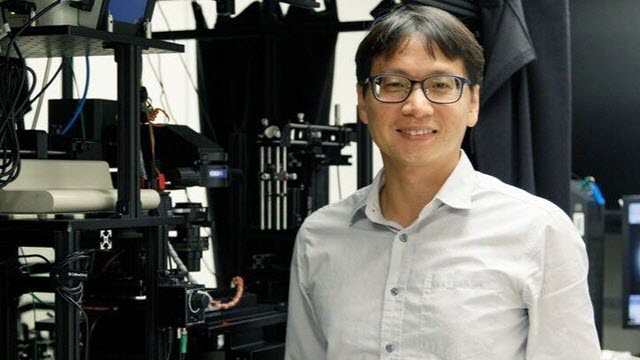 A University of Houston chemist is exploring the link between copper protein molecules in brain cells and neurodegenerative diseases like Alzheimer's.

"Scientists have studied Alzheimer's disease for 100 years and still no one knows the cause," said assistant professor of chemistry Tai-Yen Chen, who will use his $1.9 million award from the National Institute of General Medical Sciences to advance his theory that the balance of copper protein within a single cell may be a culprit.

Copper is an essential brain cell nutrient, helping neurons communicate, or relay messages, to each other. In healthy cells, the amount of copper is tightly regulated to stay at the proper levels. Scientists long ago found that people with Alzheimer's have unusually high levels of copper in the beta amyloid plaques that are a signature of the disease.

"It was an unusual finding, and we want to know more about it," said Chen, who will examine the biological regulation of copper to identify potential causes of diseases marked by abnormal amounts of copper in cells. Several diseases are linked to copper imbalances, including Menkes disease, a nervous system disorder marked by low levels of copper, and Wilson disease, a genetic disorder in which too much copper is present.

Little is known about how these metalloproteins are individually regulated or how they cooperate with each other in their native environment, living cells.

"We want to figure out how cells regulate or manipulate the copper inside them to maintain the optimum copper level," said Chen, who will examine individual neuron and liver cells. "We will use a unique method, studying a single cell to examine its behavior, then repeat it on many of them to get information from the collective behavior."

The research will provide mechanistic insights into metalloprotein-mediated copper uptake and secretion processes and copper distribution. To ensure his research outcomes will provide valuable insight into human health, Chen is using stem cells to recreate human neuron and liver cells with both normal copper levels and with copper deficiency.

"If we can figure out how copper regulation is different between normal and diseased cells, it will shed light on understanding the pathology of Alzheimer's disease and other neurodegenerative diseases," he said.

Chen is the first University of Houston researcher to receive the Maximizing Investigators Research Award from the National Institute of General Medical Sciences.