Astronomers have discovered that there may be a missing ingredient in our cosmic recipe of how dark matter behaves.

They have uncovered a discrepancy between the theoretical models of how dark matter should be distributed in galaxy clusters, and observations of dark matter's grip on clusters.

Dark matter does not emit, absorb, or reflect light. Its presence is only known through its gravitational pull on visible matter in space. Therefore, dark matter remains as elusive as Alice in Wonderland's Cheshire Cat—where you only see its grin (in the form of gravity) but not the animal itself.

One way astronomers can detect dark matter is by measuring how its gravity distorts space, an effect called gravitational lensing.

Researchers found that small-scale concentrations of dark matter in clusters produce gravitational lensing effects that are 10 times stronger than expected. This evidence is based on unprecedentedly detailed observations of several massive galaxy clusters by NASA's Hubble Space Telescope and the European Southern Observatory's Very Large Telescope (VLT) in Chile.

Galaxy clusters, the most massive structures in the universe composed of individual member galaxies, are the largest repositories of dark matter. Not only are they held together largely by dark matter's gravity, the individual cluster galaxies are themselves replete with dark matter. Dark matter in clusters is therefore distributed on both large and small scales.

"Galaxy clusters are ideal laboratories to understand if computer simulations of the universe reliably reproduce what we can infer about dark matter and its interplay with luminous matter," said Massimo Meneghetti of the INAF (National Institute for Astrophysics)-Observatory of Astrophysics and Space Science of Bologna in Italy, the study's lead author.

"We have done a lot of careful testing in comparing the simulations and data in this study, and our finding of the mismatch persists," Meneghetti continued. "One possible origin for this discrepancy is that we may be missing some key physics in the simulations."

Priyamvada Natarajan of Yale University in New Haven, Connecticut, one of the senior theorists on the team, added, "There's a feature of the real universe that we are simply not capturing in our current theoretical models. This could signal a gap in our current understanding of the nature of dark matter and its properties, as these exquisite data have permitted us to probe the detailed distribution of dark matter on the smallest scales."

The team's paper will appear in the Sept. 11 issue of the journal Science.

The distribution of dark matter in clusters is mapped via the bending of light, or the gravitational lensing effect, they produce. The gravity of dark matter magnifies and warps light from distant background objects, much like a funhouse mirror, producing distortions and sometimes multiple images of the same distant galaxy. The higher the concentration of dark matter in a cluster, the more dramatic its light bending.

Hubble's crisp images, coupled with spectra from the VLT, helped the team produce an accurate, high-fidelity dark-matter map. They identified dozens of multiply imaged, lensed, background galaxies. By measuring the lensing distortions, astronomers could trace out the amount and distribution of dark matter. 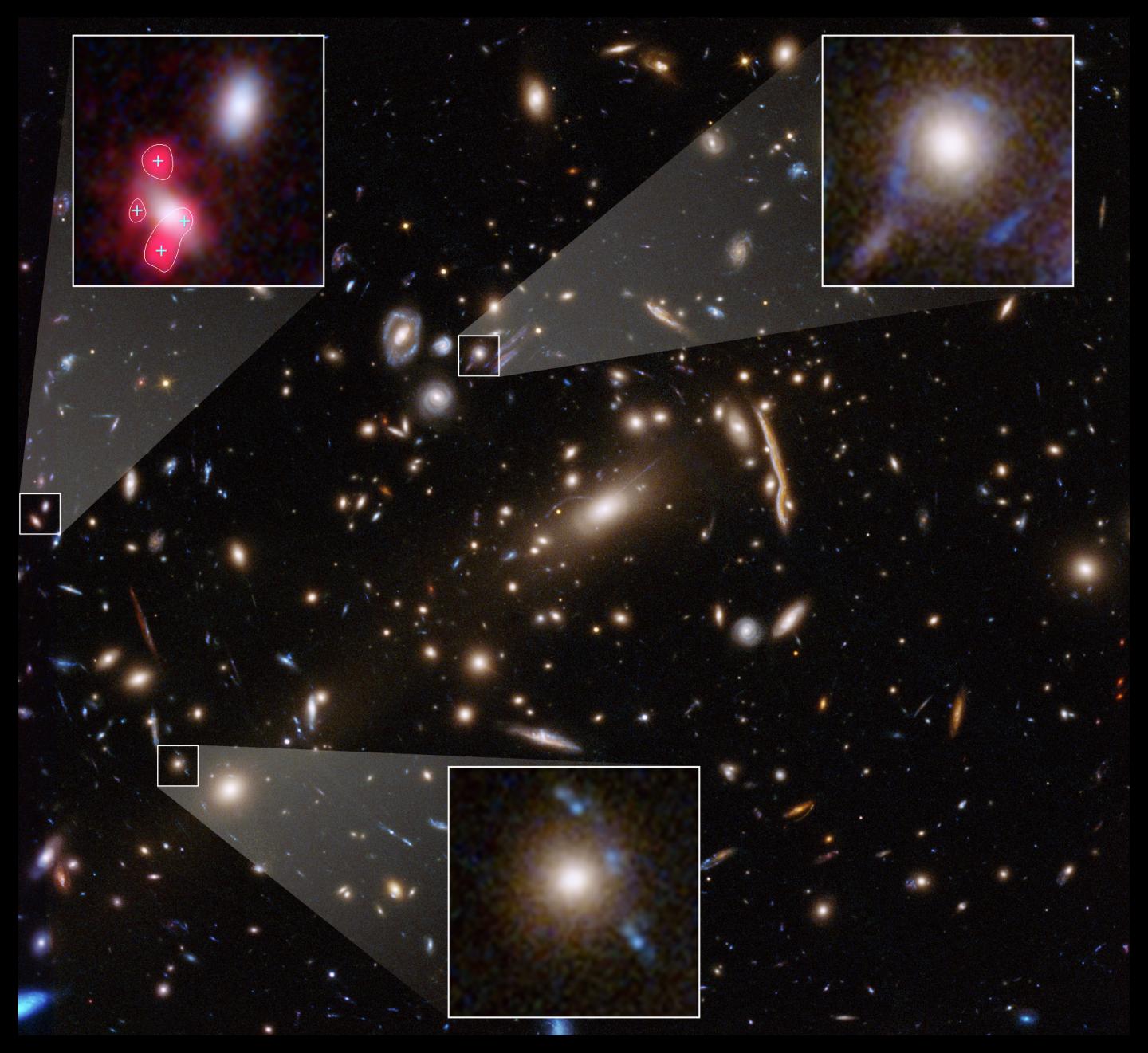 This Hubble Space Telescope image shows the massive galaxy cluster MACS J1206. Embedded within the cluster are the distorted images of distant background galaxies, seen as arcs and smeared features. These distortions are caused by the amount of dark matter in the cluster, whose gravity bends and magnifies the light from faraway galaxies. This effect, called gravitational lensing, allows astronomers to study remote galaxies that would otherwise be too faint to see. Several of the cluster galaxies are sufficiently massive and dense to also distort and magnify faraway sources. The galaxies in the three pullouts represent examples of such effects. In the snapshots at upper right and bottom, two distant, blue galaxies are lensed by the foreground, redder cluster galaxies, forming rings and multiple images of the remote objects. The red blobs around the galaxy at upper left denote emission from clouds of hydrogen in a single distant source. The source, seen four times because of lensing, may be a faint galaxy. These blobs were detected by the Multi-Unit Spectroscopic Explorer (MUSE) at the European Southern Observatory's Very Large Telescope (VLT) in Chile. The blobs do not appear in the Hubble images. MACS J1206 is part of the Cluster Lensing And Supernova survey with Hubble (CLASH) and is one of three galaxy clusters the researchers studied with Hubble and the VLT. The Hubble image is a combination of visible- and infrared-light observations taken in 2011 by the Advanced Camera for Surveys and Wide Field Camera 3.
NASA, ESA, P. Natarajan (Yale University), G. Caminha (University of Groningen), M. Meneghetti (INAF-Observatory of Astrophysics and Space Science of Bologna), the CLASH-VLT/Zooming teams; acknowledgment: NASA, ESA, M. Postman (STScI), the CLASH team

The three key galaxy clusters used in the analysis, MACS J1206.2-0847, MACS J0416.1-2403, and Abell S1063, were part of two Hubble surveys: The Frontier Fields and the Cluster Lensing And Supernova survey with Hubble (CLASH) programs.

To the team's surprise, the Hubble images also revealed smaller-scale arcs and distorted images nested within the larger-scale lens distortions in each cluster's core, where the most massive galaxies reside.

The researchers believe that the embedded lenses are produced by the gravity of dense concentrations of dark matter associated with individual cluster galaxies. Dark matter's distribution in the inner regions of individual galaxies is known to enhance the cluster's overall lensing effect.

Follow-up spectroscopic observations added to the study by measuring the velocity of the stars orbiting inside several of the cluster galaxies. "Based on our spectroscopic study, we were able to associate the galaxies with each cluster and estimate their distances," said team member Piero Rosati of the University of Ferrara in Italy.

"The stars' speed gave us an estimate of each individual galaxy's mass, including the amount of dark matter," added team member Pietro Bergamini of the INAF-Observatory of Astrophysics and Space Science in Bologna, Italy.

The team compared the dark-matter maps with samples of simulated galaxy clusters with similar masses, located at roughly the same distances as the observed clusters. The clusters in the computer simulations did not show the same level of dark-matter concentration on the smallest scales—the scales associated with individual cluster galaxies as seen in the universe.

The team looks forward to continuing their stress-testing of the standard dark-matter model to pin down its intriguing nature.