NEW YORK, NY (December 16, 2015) – A network of interacting brain regions known as the default mode network (DMN) was found to have stronger connections in adults and children with a high risk of depression compared to those with a low risk. These findings suggest that increased DMN connectivity is a potential precursor, or biomarker, indicating a risk of developing major depressive disorder (MDD).

The study was published online today in Neuropsychopharmacology.

Researchers at Columbia University Medical Center (CUMC) and New York State Psychiatric Institute (NYSPI) used magnetic resonance imaging to compare people at high risk for depression to those at low risk based on their family history of depression. This approach allowed researchers to look for differences in the brain that are not a consequence of the depression itself, since the disorder had not yet manifested in most of the individuals. 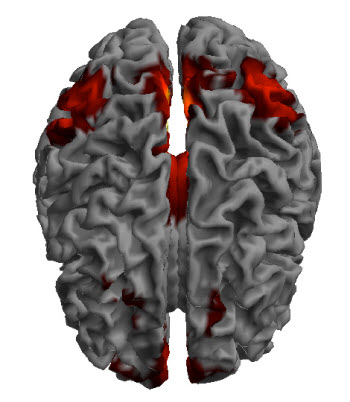 Resting-state functional MRI showing connectivity in the Default Mode Network.Image courtesy of Columbia UniversityThe DMN brain system is more active when people are focused on internal thinking, such as ruminative thoughts. Increased DMN connections have previously been seen in individuals with MDD, may relate to ruminative symptoms, and typically normalize with antidepressant treatment. The study reveals that the process of increasing DMN connections may occur before the onset of depression.

“These findings suggest that looking at activity in the DMN may offer an objective method of identifying people who are at risk of developing major depression,” said lead author Myrna Weissman, PhD, the Diane Goldman Kemper Family Professor of Epidemiology (in Psychiatry) at CUMC and Chief of the Division of Epidemiology at NYSPI. “This may represent a another way toward advancing prevention and early intervention for this major public health issue.”

“If this insight proves correct,” said Jonathan Posner, MD, lead author and Associate Professor of Clinical Psychiatry at CUMC, ”behavioral interventions that improve the functioning of the DMN, such as meditation and mindfulness, could be used to address a brain-based problem (increased DMN connections), before it leads to a depressive illness.”

Dr Posner has received research support from Shire Pharmaceuticals. The remaining authors have no competing interests to report.