Dec 08, 2020|3 min readRoyal Netherlands Institute for Sea Research
The mangrove forests on Java's north coast are slowly suffocating in plastic waste. The plastic problem in northeast Asia is huge and a growing threat to the region's mangroves; a natural alley against coastal erosion. A short impression from the fieldwork done by NIOZ researcher Celine van Bijsterveldt shows that restoration of this green protection belt is impossible without better waste management.
Celine van Bijsterveldt

The mangrove forests on Java's north coast are slowly suffocating in plastic waste. The plastic problem in northeast Asia is huge and a growing threat to the region's mangroves; a natural alley against coastal erosion. Based on fieldwork published in Science of the Total Environment, Royal Netherlands Institute for Sea Research (NIOZ) researcher Celine van Bijsterveldt shows that restoration of this green protection belt is impossible without better waste management. 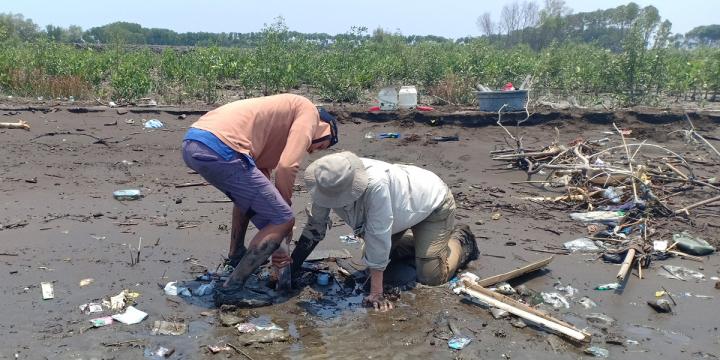 Coring for plastic on the seaward edge of a former mangrove stand. A ridge of sediment and plastic is visible in the background, and behind that a young stand of planted mangroves. The mature trees that used to be present behind the young mangroves at this location were cut down to create a new aquaculture pond, another serious threat to mangrove survival along the north coast of Java.
Kuswantoro, Wetlands International

Van Bijsterveldt has monitored the accumulation of plastic waste in Indonesian mangroves over years. Most of it includes household litter, carried from the inland to the coastal area by local rivers. Ultimately, the waste gets stuck in the last stronghold between land and sea.  "Mangroves form a perfect plastic trap," says van Bijsterveldt. For the mangrove tree, this trap can become quite lethal. The most common mangrove tree on Java's coast, the grey mangrove, has upward-growing roots to get oxygen flowing during high tide. "You can look at these roots as snorkels," says van Bijsterveldt. "When plastic waste accumulates in these forests, the snorkels are blocked." In areas completely covered by plastic, trees suffocate.

On the forest floor of mangroves along the north coast, it is hard to find a square meter without plastic. "On average, we found 27 plastic items per square meter," recounts van Bijsterveldt. At several locations, plastic covered half of the forest floor. The problem isn't only the plastic on the surface. The team found plastics buried as deep as 35 cm inside the sediment. Plastic, stuck in these upper layers further decreases the trees access to oxygen. Still, van Bijsterveldt was impressed by the trees' resilience. "The roots change course when they are obstructed. They grow around the plastic. When half of the forest floor is covered, the tree still gets enough oxygen to keep its leaves." However, the prospect of survival gets much gloomier once the threshold of 75 percent is reached and plastic in the sediment pushes it towards 100 percent. "We've seen roots stuck inside plastic bags. Trying to find a way out, they just grow in circles. Eventually, trees that cannot outgrow the plastic die." 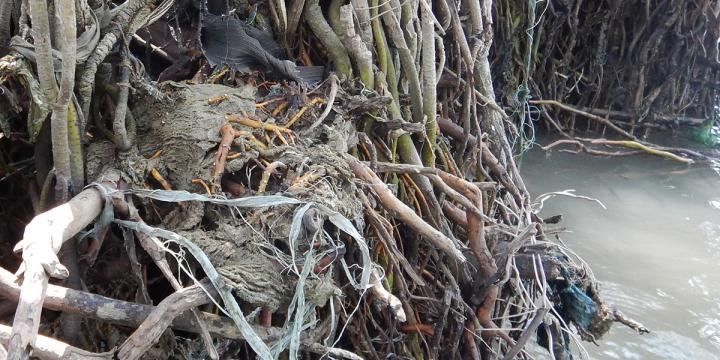 Plastic entangled in the rinsed-out root zone of a mangrove tree at an eroding site.
Celine van Bijsterveldt

Battling erosion and breaking waves In cooperation with non-governmental organizations and local communities, van Bijsterveldt works on mangrove restoration projects to prevent further erosion. Over the years many mangrove forests had to make way for rice paddies and later aquaculture ponds. A business model that brings fast profits but lacks in sustainability as it accelerates erosion. Not a small problem in a region threatened by coastal loss and rapid subsidence, and no financial means to build high-cost and high-maintenance solutions like dykes. Van Bijsterveldt explains: "Mangroves form a low-cost, natural defense for the coastal communities. They act like wave breakers and can prevent erosion by trapping sediment from the water."

Restoration brings more benefits. Healthy mangroves mean healthy fish populations and a sustainably fishing economy. The tourism industry is also discovering the forests as a growing attraction that boosts the local economy. The Indonesian government is investing in mangrove restoration in an attempt to re-create a green-belt along the coast. But restoration is slow and existing forests are stressed. Van Bijsterveldt saw attempts of planting new mangroves fail: "There is so much focus on increasing the initial number of mangrove seedlings, that the challenges posed by plastic waste on the actual survival of young trees is overlooked. Replanting mangroves without tackling the plastic problem is like trying to try to empty the ocean with a thimble. Successful restoration needs to go hand in hand with sustainable waste management."

- This press release was originally published on the NIOZ website. It has been edited for style