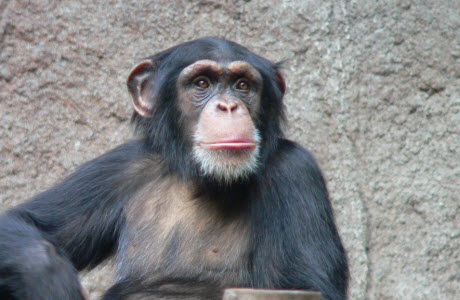 Based on a recent ruling, chimpanzees used in research won't get legal personhood any time soon.Photo credit: Thomas Lersch, Wikimedia CommonsNew York, NY – New York County Supreme Court Justice Barbara Jaffe issued a 33-page decision in the Nonhuman Rights Project’s (NhRP) habeas corpus case on behalf of two chimpanzees being held in captivity in a Stony Brook University laboratory. Justice Jaffe said that “for now” she is bound to follow the previous determination of a state appellate court in the case of another chimpanzee, Tommy, whose case is now before the New York Court of Appeals pending the NhRP’s request for further review.

In the July 30 decision, Justice Jaffe, citing the New York Court of Appeals, said, “’Legal personhood’ is not necessarily synonymous with being human … Rather, the parameters of legal personhood have been and will continue to be discussed and debated by legal theorists, commentators, and courts and will not be focused on semantics or biology, even philosophy, but on the proper allocation of rights under the law, asking, in effect, who counts under our law.”

In her decision, Justice Jaffe agreed that the NhRP had standing to bring the case on behalf of a chimpanzee and rejected all the procedural barriers that the Attorney General of New York attempted to place before the court.

Concluding that, “Efforts to extend legal rights to chimpanzees are thus understandable; some day they may even succeed … For now, however, given the precedent to which I am bound it is hereby ordered that the petition for a writ of habeas corpus is denied…”