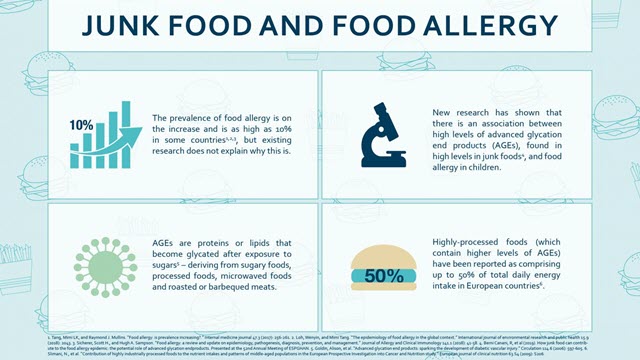 The role of AGEs in the development of food allergyCREDIT: ESPGHAN

Experts at the 52nd Annual Meeting of the European Society for Paediatric Gastroenterology, Hepatology, and Nutrition presented the results of a study that show higher levels of advanced glycation end products (AGEs), found in abundance in junk food, are associated with food allergy in children.

Researchers from the University of Naples 'Federico II' observed three groups of children aged between siz- and 12-years-old (61 children in total): those with food allergies, those with respiratory allergies, and healthy controls. The study revealed a significant correlation between subcutaneous levels of advanced glycation end products (AGEs) and junk food consumption, and further, that children with food allergies presented with higher levels of subcutaneous levels of AGEs than those children with respiratory allergies or no allergies at all. In addition, the research team found compelling evidence relating to the mechanism of action elicited by AGEs in determining food allergy.

AGEs are proteins or lipids that become glycated after exposure to sugars and are present at high levels in junk foods—deriving from sugars, processed foods, microwaved foods, and roasted or barbequed meats. AGEs are already known to play a role in the development and progression of different oxidative-based diseases including diabetes, atherosclerosis (where plaque builds up inside the arteries), and neurological disorders, but this is the first time an association has been found between AGEs and food allergy.

While firm statistics on global food allergy prevalence are lacking, there is growing evidence that incidence is on the increase, especially amongst young children, and prevalence is reported to be as high as 10 percent in some countries. Similarly, over recent decades there has been a dramatic increase in the consumption of highly-processed foods (which are known to contain higher levels of AGEs), and highly-processed foods have been reported as comprising up to 50 percent of total daily energy intake in European countries.

Commenting on the research, principal investigator Roberto Berni Canani said: "As of yet, existing hypotheses and models of food allergy do not adequately explain the dramatic increase observed in the last years—so dietary AGEs may be the missing link. Our study certainly supports this hypothesis, we now need further research to confirm it. If this link is confirmed, it will strengthen the case for national governments to enhance public health interventions to restrict junk food consumption in children."

Isabel Proaño, director of Policy and Communications at the European Federation of Allergy and Airways Diseases Patients' Associations (EFA) added: "These new findings show there are still many environmental and dietary issues affecting our health and wellbeing. Healthcare professionals and patients do not have all of the important information to face a disease that dramatically impacts their quality of life, and industrialised food processing and labelling gaps will not help them. We call on the public health authorities to enable better prevention and care of food allergy."