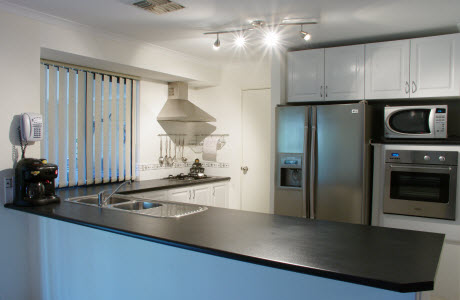 Keeping your kitchen clean and tidy is important to maintaining a healthy diet, a new Cornell study indicates.Photo credit: Gnangarra, Wikimedia CommonsA cluttered and chaotic kitchen can often cause out-of-control stressful feelings. It might also cause something else–increased snacking of indulgent treats.

A new Cornell University study explored how a noisy, disruptive and disorganized environment influences how much women eat. Researchers at the Cornell Food and Brand Lab found the combination of stress and a messy environment leads to more snacking and an increase in the number of calories consumed.

“We found the more cluttered and confusing an environment was, the more people ate,” says co-author Brian Wansink, the John S. Dyson Professor of Marketing in the Charles H. Dyson School of Applied Economics and Management and director of the Food and Brand Lab. “It made them anxious, and when they got anxious, they ended up eating more cookies.”

Related article: Your Stress is My Stress

But the news is not all discouraging for those with less-than-tidy kitchen space: A relaxed mindset can help reduce the pressure to overeat, counteracting the influence of a chaotic space.

For the study, 98 women were split among two different kitchen environments: one organized and quiet with no disruptions, and the other a “chaotic” kitchen full of disorganized tables, disheveled papers, and dishes scattered around.

To prime a certain mindset from participants, the researchers gave each person five minutes to complete one of three writing tasks. The prompts asked the women to either write about a time in their lives when they either felt organized and in control, or an opposite time when they were stressed. A third prompt considered a neutral condition.

Following the writing exercise, researchers provided bowls of carrots, crackers, and cookies and asked the women to complete a taste survey, after which they were told to eat as much as they wanted.

Researchers discovered that stressed-out participants consumed twice as many cookies in a messy kitchen compared with those in a quiet, organized space without disruption.

“Being in a chaotic environment and feeling out of control is bad for diets. It seems to lead people to think, ‘Everything else is out of control, so why shouldn’t I be?’” says lead author Lenny Vartanian, a former postdoctoral associate at the Food and Brand Lab and current associate professor of psychology at the University of New South Wales, Australia.

But there is hope for those who can’t seem to keep their kitchen clear. The researchers found that those who felt less stress weren’t as influenced by a messy environment. After writing about a time when they were felt organized and in control of their lives, women ate about 50 percent fewer snacks than those who were stressed. The researchers concluded that taking a moment to recall a more controlled time in one’s life can help women resist the pressure to overeat.

“Although meditation, as a way of feeling in control, might be one way to resist kitchen snacking for some, it’s probably easier just to keep our kitchens picked up and cleaned up,” Wansink says.

While the research focused on women, Vartanian says, “I suspect the same would hold with males.”

The study was co-authored by Kristen Kernan ’07 and appears in the journal Environment and Behavior.

For more about the study, including a video explaining the findings, visit the Cornell Food and Brand Lab website.