Newswise — San Diego – Juzen-taiho-to, also known as shi quan da bu tang, is one of the most popular herbal formulas in China and Japan and is used in the West by practitioners of traditional Asian medicine. New research suggests the remedy’s immune-boosting effects are due, at least in part, to bacteria that grow on the roots of one of the formula’s component herbs.

“There’s been a lot of research on juzen-taiho-to in Asia, and it has attracted attention in the Western medical community, as well,” said Kriti Kalpana, a doctoral candidate at Hunter College of the City University of New York, who conducted the research. “It has definitely been known as an immune-boosting formulation, and we believe that looking at the components one by one can help us better understand its effects.” 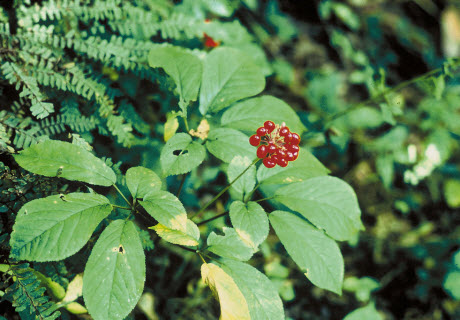 Ginseng is one of the ten component herbs in juzen-taiho-to. Photo courtesy of Wikimedia CommonsKalpana will present the research at the American Society for Biochemistry and Molecular Biology Annual Meeting during Experimental Biology 2016.

Juzen-taiho-to is a centuries-old formulation whose name means “all-inclusive great tonifying decoction.” Its ten component herbs include cinnamon, ginseng, licorice, and an assortment of other roots and fungi that are ground into a fine powder and consumed as a tea-like broth.

To investigate the source of the formulation’s immune-boosting activity, Kalpana and her colleagues zeroed in on its most potent ingredient, Angelica sinensis, an indigenous Chinese plant known as “female ginseng.” Attempts to pinpoint the immunostimulatory activity of the plant itself kept leading the team into dead ends. So, they broadened the search using a technique known as metagenomics, which allowed them to screen for active compounds in both the plant and the microbes that grow on it.

The results revealed colonies of Rahnella aquatilis bacteria growing on the Angelica roots. A closer investigation showed Rahnella to carry on its surface a collection of large molecules known as lipopolysaccharides. It is these molecules, and specifically a component of them known as Lipid A, that appear to be responsible for the bacteria’s powerful immunostimulatory effects.

Isolating the lipopolysaccharides and Lipid A and running them through a battery of screening tests, the team confirmed that the molecules are potent immunostimulants with low toxicity.

“Our study reinforces the growing awareness of ‘good bacteria’ and their health benefits,” said Kalpana. “This type of bacteria, in this context, seems to be non-toxic, safe to use and effective in helping you fight off disease.”

However, it seems that not all juzen-taiho-to is created equal. Testing several different brands of the formulation, the researchers found vastly different concentrations of the Rahnella bacteria and its potent compounds. Unlike the processes used to create Western medicines, there is little standardization in the preparation of herbal remedies; as a result, the types and amount of bacteria on a plant’s roots may vary depending on its growing conditions, country of origin or the methods used to harvest and process it.

“There’s a lot of concern about the safety and efficacy of herbal medicines. Our study, along with many others, shows that herbal medicines from different manufacturers can have very different properties and effects,” said Kalpana.

The team plans to further investigate whether it is possible to extract the active compounds or produce the herbal remedy in ways that could offer immune-boosting activity with greater reliability.