Portland State University researchers used advanced electron microscopy to create a 3-D reconstruction of a membrane protein at an unprecedented level of resolution, setting the stage for the development of drugs that could target the protein more effectively to treat a variety of diseases.

The Reichow Lab, led by chemistry professor Steve Reichow and made up of undergraduate and graduate students, uses cryo-electron microscopy (cryo-EM) and computer modeling to visualize how individual proteins in cells interact and function at the molecular level.

The Reichow Lab is particularly interested in a class of proteins known as membrane proteins. Membrane proteins are key for cells to communicate with one another and are the target of 50 percent of pharmaceutical drugs, Reichow said. 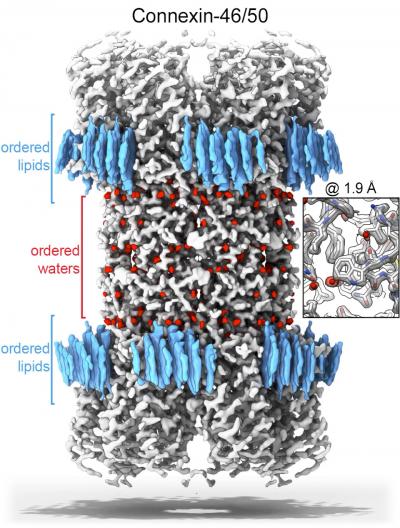 The focus of this research was connexin-46/50, two proteins from the eye lens that form pathways for cell-to-cell communication. The group used lipid nanodisc technology to coax the proteins back into their native-like membrane environment, which allowed them to image the protein at a remarkably high resolution of 1.9-Angstrom (an angstrom is one 100 millionth of a centimeter). The group was the first to image a membrane protein below 2.0-Angstrom using cryo-EM, which momentarily set a world record for this technology.

Reichow said a resolution below 2.0-Angstrom is the precision desired for structure-based drug design, which uses the atomic-level detail of a 3D structure to computationally design novel therapeutic agents. The high resolution provided new insight into how this group of membrane proteins interact with their native lipid environment as well as allowed them to see nearly 400 water molecules, which play an important role in protein structure and function.

"Drugs use water to extend their interaction with proteins," Reichow said. "Drug manufacturers are missing a big piece of the puzzle if they don't know where the water molecules are."