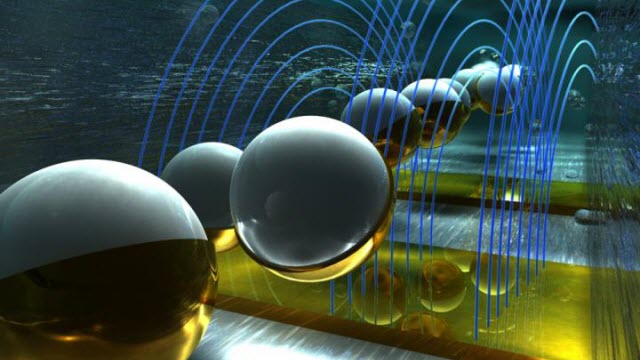 An artists' rendition of microparticles flowing through a channel and passing through electric fields, where they are detected electronically and barcode-scanned.Image credit: Ella Marushchenko and Alexander Tokarev/Ella Maru Studios

Imagine wearing a device that continuously analyzes your sweat or blood for different types of biomarkers, such as proteins that show you may have breast cancer or lung cancer.

Rutgers engineers have invented biosensor technology—known as a lab on a chip—that could be used in hand-held or wearable devices to monitor your health and exposure to dangerous bacteria, viruses, and pollutants.

"This is really important in the context of personalized medicine or personalized health monitoring," said Mehdi Javanmard, an assistant professor in the Department of Electrical and Computer Engineering at Rutgers University-New Brunswick. "Our technology enables true labs on chips. We're talking about platforms the size of a USB flash drive or something that can be integrated onto an Apple Watch, for example, or a Fitbit."

A study describing the invention was recently highlighted on the cover of Lab on a Chip, a journal published by the Royal Society of Chemistry.

The technology, which involves electronically barcoding microparticles, giving them a bar code that identifies them, could be used to test for health and disease indicators, bacteria, and viruses, along with air and other contaminants, said Javanmard, senior author of the study.

In recent decades, research on biomarkers—indicators of health and disease such as proteins or DNA molecules—has revealed the complex nature of the molecular mechanisms behind human disease. That has heightened the importance of testing bodily fluids for numerous biomarkers simultaneously, the study says.

"One biomarker is often insufficient to pinpoint a specific disease because of the heterogeneous nature of various types of diseases, such as heart disease, cancer, and inflammatory disease," said Javanmard, who works in the School of Engineering. "To get an accurate diagnosis and accurate management of various health conditions, you need to be able to analyze multiple biomarkers at the same time."

Bulky optical instruments are the state-of-the-art technology for detecting and measuring biomarkers, but they're too big to wear or add to a portable device, Javanmard said.

Electronic detection of microparticles allows for ultra-compact instruments needed for wearable devices. The Rutgers researchers' technique for barcoding particles is, for the first time, fully electronic. That allows biosensors to be shrunken to the size of a wearable band or a micro-chip, the study says.

The technology is greater than 95 percent accurate in identifying biomarkers and fine-tuning is underway to make it 100 percent accurate, he said. Javanmard's team is also working on portable detection of microrganisms, including disease-causing bacteria and viruses.

"Imagine a small tool that could analyze a swab sample of what's on the doorknob of a bathroom or front door and detect influenza or a wide array of other virus particles," he said. "Imagine ordering a salad at a restaurant and testing it for E. coli or Salmonella bacteria."