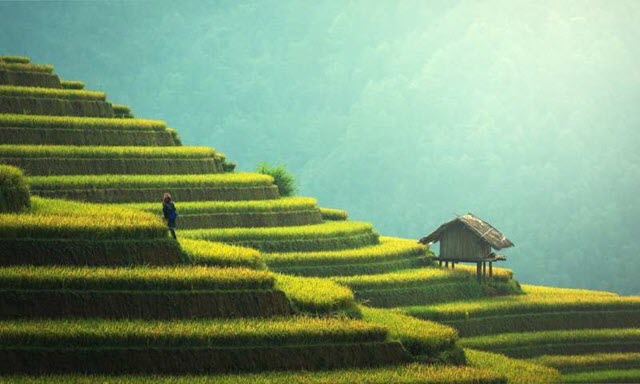 Inhibiting the production of the "happiness" hormone—serotonin—in rice plants, increases their resistance to two of the world's most destructive and costly insect pests, new research has shown.

The study, published this week in Nature Plants, shows that by suppressing the production of serotonin, rice plants become more resistant to their two most serious predators—the brown plant-hopper and the striped stem borer.

Conversely, adding serotonin to the resistant rice led to a loss in insect resistance.

Led by experts from Newcastle University, UK, and Zhejiang University, China, the team says these new findings demonstrate the important role that serotonin plays in plant defense and opens up new opportunities for breeding insect-resistant varieties of rice and other cereal crops.

"Recent research has suggested that, even though they lack a nervous system, plants are much more responsive to their surroundings than was previously thought," explains Angharad Gatehouse, co-author on the study and a rrofessor of invertebrate molecular biology at Newcastle University.

"This example shows how the same chemicals that modify behavior in animals can be used to regulate plant defense against insect pests and is another reminder that all living organisms have more similarities than differences at a basic level."

Rice is one of the world's most important foods and the brown plant-hopper and striped stem borer are the two most serious pests in rice production causing losses of billions of dollars.

The plant hopper is a sap-sucking pest, which transmits plant viruses, as well as causing "hopper burn" where blockage of the water-carrying vascular tissue causes plants to wilt and die causing significant yield loss.

The borer is a chewing insect that feeds on young plants causing "dead hearts" and "white heads" and again results in significant yield losses.

"Indiscriminate use of chemical pesticides has resulted in these two pests becoming increasingly difficult to control," explains Gatehouse.

"The development of insect-resistant rice varieties is seen as a viable and ecologically sustainable approach for controlling these devastating insect pests."

Serotonin is ubiquitous across all forms of life and in mammals it is an important neurotransmitter.

In humans, serotonin helps to regulate mood, boost our appetite, regulate digestion and helps with sleep and memory.

In plants, serotonin is involved in growth and development, while in insects it is used to seek out resources and food.

Analyzing the plant's response to insect attack, the team found both serotonin and salicylic acid were produced in response to an infestation but supressing serotonin production made the rice plants more pest-resistant.

And by disabling the gene responsible for making serotonin, the team was able to further increase levels of salicylic acid in the plant and increase its resistance.