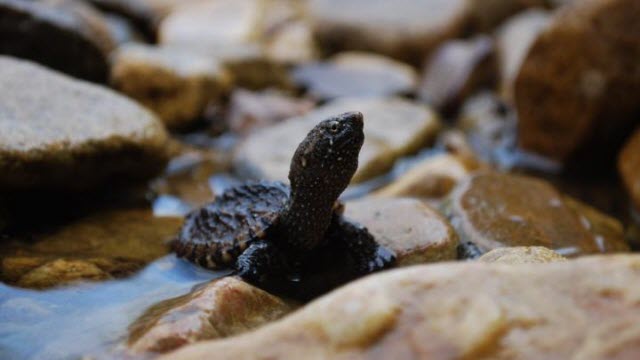 Most of us know that our biological sex is decided by the pairing of X and Y chromosomes during conception.

However, for many wildlife species, sex of offspring is determined after fertilization and often influenced by environmental factors, such as temperature. The sex of reptiles, for example, is based on temperatures in the nest while eggs incubate.

Current research shows that increasing global temperatures as a result of climate change are expected to produce more female turtles since their offspring are influenced by the nest's temperature. But now, a team of Virginia Tech biologists has found that the nesting environment of turtles in agricultural habitats, which can ultimately lower nesting temperatures, can actually produce more males.

To make matters worse, the researchers found that the effect of agricultural activities on sex ratios was exacerbated by the presence of mercury pollution. While it's known that mercury can impact reproduction in reptiles, this study provides the first documentation that mercury can influence sex determination. The common and pervasive environmental pollutant, when transferred from mother to offspring, was found to increase the number of male offspring even more.

The findings, which were recently published in the journal Biological Conservation, shed new light on predictions about temperature and sex determination in the snapping turtle, Chelydra serpentina, and many other reptilian species. By examining the impacts of agricultural land use, both independently and interactively with mercury pollution, the research builds new understanding for the complexity of climate-related predictions.

"Our work illustrates how routine human activities can have unexpected side effects for wildlife," said William Hopkins, professor of wildlife conservation in the College of Natural Resources and Environment and lead researcher of the Wildlife Ecotoxicology and Physiological Ecology Lab at Virginia Tech, who oversaw the study. "We found strong masculinizing shifts in sex ratios caused by the interaction of two of the most common global changes on the planet, pollution and crop agriculture."

Related Article: Scientists Discover Eggs of One of World's Most Endangered Turtles

The team worked along the South River in Virginia, where large amounts of mercury persist in the river and floodplain due to leaks from a nearby manufacturing plant in the river from 1929 to 1959. Field experiments were replicated simultaneously in the laboratory using high-resolution temperature profiles to confirm results from the field.

In the field, temperature probes placed in each nest recorded temperature at one-hour intervals throughout the incubation period, mid-May through September. Every eight days, samples were collected to determine soil moisture content, and vegetation growth was monitored for height, density, and ground cover surrounding the nests. 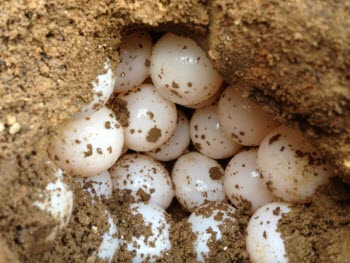 A view inside a snapping turtle nest.Image courtesy of Bill HopkinsSnapping turtles, they found, favor agricultural sites for nesting because they naturally select sun-exposed areas with loose soil, sand, and vegetation debris in which to dig their nests. Females are attracted to the open and sunny agricultural fields in the early summer; the sites quickly become shaded and cooled as dense, monoculture crops grow throughout the season. Cooler incubation temperatures in the nest mean more male offspring are produced.

"Our results indicate that turtles are attracted away from natural nesting habitat into agricultural habitats, and this decision has undesirable consequences for their reproductive success," said Hopkins. "Turtle populations are sensitive to male-biased sex ratios, which could lead to population declines. These findings are particularly alarming because freshwater turtles are one of the most endangered groups of vertebrates on earth."

The team also analyzed mercury levels from maternal blood collected in the field as well as one random egg from each nest sampled. They found that higher concentrations of mercury in the mother turtle correlated with the development of more male offspring, and turtles exposed to both mecury and agricultural shade produced the most male offspring.

"These unexpected interactions raise new, serious concerns about how wildlife respond to environmental changes due to human activities. They also add an extra layer of complexity to current projections of climate change," said Hopkins.

A general best practice for conservation management, according to the researchers, is to incorporate periods of uncultivation for fields in areas known to support a high number of turtle nests. For species of special concern, such as the wood turtle in Virginia, working with landowners to rotate periods of crop growth, implement predator guards, and exercise caution with machinery near identified nests could prevent over-shading and nest damage.