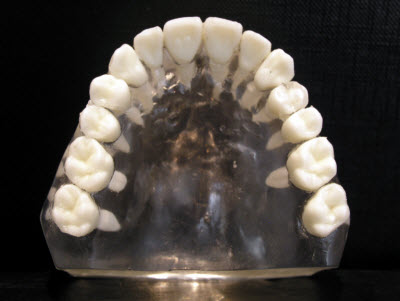 Image credit: Xauxa, Wikimedia CommonsNewswise — Forensic science is a vital crime-fighting tool in today’s criminal justice system. But it can also lead to false convictions, according to H. David Sheets, PhD. Landmark research by the Canisius College physics professor proves that bite-mark analysis is “far from an exact science.”

Bite-mark analysis is widely accepted in criminal courts and often presented as key evidence in prosecutions. “People assume that it’s close to fingerprints in terms of accuracy,” Sheets says. “But the notions that a person’s dentition is unique or that the human skin can accurately record an individual’s bite mark have never been validated scientifically.”

Sheets and his colleagues, Mary A. Bush, DDS and Peter J. Bush, from the University at Buffalo (UB) School of Dental Medicine, sought to do just that.

“When the dental alignments were similar, it was difficult to distinguish exactly which set of teeth made which bites,” Sheets says. “That tells us that a single bite mark is not distinct enough to be linked to a specific individual. It can actually point to many different individuals.” This means that a false identification is possible, which can lead a police investigation away from the real perpetrator and toward an innocent individual.

The Canisius-UB studies are among the largest conducted on bite-mark analysis and the first to use human-skin models (rather than animal models, wax or Styrofoam). More notable is that its findings call into question criminal convictions that rested entirely on bite-mark evidence.

Since 2000, at least 25 people convicted on bite-mark evidence have been exonerated due to advances in DNA testing, according to the Innocence Project. The national organization, which works to free wrongfully convicted individuals, is now using the Canisius-UB studies to help build a case for having bite-mark evidence cast out of criminal proceedings.

“This is an example of where science can help prevent future wrongful convictions and perhaps even provide some social justice to those already convicted,” Sheets concludes.

In addition to Sheets’ research on bite-mark analysis, he is a member of the Expert Working Group on Human Factors in Handwriting Analysis. Appointed by the National Institute of Standards and Technology (NIST) and the National Institute of Justice (NIJ), which provide oversight to the federal forensic community, the Expert Working Group on Handwriting Analysis is one of several discipline-specific groups charged with identifying the human factors that affect the outcomes of forensic analyses and developing best practices, based on scientific research, that will reduce the likelihood of errors in the future.