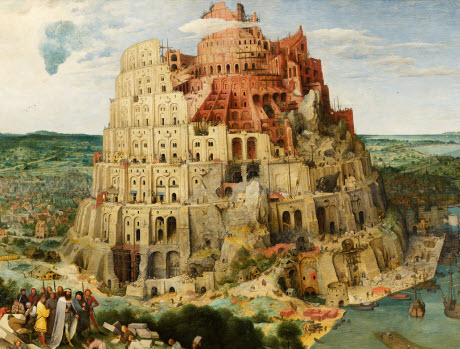 Researchers argue that whenever science is only published in one language, including solely in English, barriers to the transfer of knowledge are created.Image credit: Pieter Brueghel the Elder, via Wikimedia CommonsEnglish is now considered the common language, or 'lingua franca,' of global science. All major scientific journals seemingly publish in English, despite the fact that their pages contain research from across the globe.

However, a new study suggests that over a third of new scientific reports are published in languages other than English, which can result in these findings being overlooked—contributing to biases in our understanding.

As well as the international community missing important science, language hinders new findings getting through to practitioners in the field say researchers from the University of Cambridge.

They argue that whenever science is only published in one language, including solely in English, barriers to the transfer of knowledge are created.

The Cambridge researchers call on scientific journals to publish basic summaries of a study's key findings in multiple languages, and universities and funding bodies to encourage translations as part of their 'outreach' evaluation criteria.

"While we recognize the importance of a lingua franca, and the contribution of English to science, the scientific community should not assume that all important information is published in English," says Dr Tatsuya Amano from Cambridge's Department of Zoology.

"Language barriers continue to impede the global compilation and application of scientific knowledge."

The researchers point out an imbalance in knowledge transfer in countries where English is not the mother tongue: "much scientific knowledge that has originated there and elsewhere is available only in English and not in their local languages."

This is a particular problem in subjects where both local expertise and implementation is vital—such as environmental sciences.

As part of the study, published Dec. 29 in the journal PLOS Biology, those in charge of Spain's protected natural areas were surveyed. Over half the respondents identified language as an obstacle to using the latest science for habitat management.

The Cambridge team also conducted a litmus test of language use in science. They surveyed the web platform Google Scholar—one of the largest public repositories of scientific documents—in a total of 16 languages for studies relating to biodiversity conservation published during a single year, 2014.

Of the over 75,000 documents, including journal articles, books and theses, some 35.6 percent were not in English. Of these, the majority was in Spanish (12.6%) or Portuguese (10.3%). Simplified Chinese made up six percent, and three percent were in French.

The researchers also found thousands of newly published conservation science documents in other languages, including several hundred each in Italian, German, Japanese, Korean, and Swedish.

Random sampling showed that, on average, only around half of non-English documents also included titles or abstracts in English. This means that around 13,000 documents on conservation science published in 2014 are unsearchable using English keywords.

This can result in sweeps of current scientific knowledge - known as 'systematic reviews'—being biased towards evidence published in English, say the researchers. This, in turn, may lead to over-representation of results considered positive or 'statistically significant', and these are more likely to appear in English language journals deemed 'high-impact'.

In addition, information on areas specific to countries where English is not the mother tongue can be overlooked when searching only in English.

For environmental science, this means important knowledge relating to local species, habitats, and ecosystems—but also applies to diseases and medical sciences. For example, documents reporting the infection of pigs with avian flu in China initially went unnoticed by international communities, including the WHO and the UN, due to publication in Chinese-language journals.

"The real problem of language barriers in science is that few people have tried to solve it. Native English speakers tend to assume that all the important information is available in English. But this is not true, as we show in our study.

"On the other hand, non-native English speakers, like myself, tend to think carrying out research in English is the first priority, often ending up ignoring non-English science and its communication.

"I believe the scientific community needs to start seriously tackling this issue."

Amano and colleagues say that, when conducting systematic reviews or developing databases at a global scale, speakers of a wide range of languages should be included in the discussion: "at least Spanish, Portuguese, Chinese, and French, which, in theory, cover the vast majority of non-English scientific documents."

The website conservationevidence.com, a repository for conservation science developed at Cambridge by some of the authors, has also established an international panel to extract the best non-English language papers, including Portuguese, Spanish, and Chinese.

"Journals, funders, authors and institutions should be encouraged to supply translations of a summary of a scientific publication—regardless of the language it is originally published in," says Amano. The authors of the new study have provided a summary in Spanish, Portuguese, Chinese, and French as well as Japanese.

"While outreach activities have recently been advocated in science, it is rare for such activities to involve communication across language barriers."

The researchers suggest efforts to translate should be evaluated in a similar way to other outreach activities such as public engagement, particularly if the science covers issues at a global scale or regions where English is not the mother tongue.

Adds Amano: "We should see this as an opportunity as well as a challenge. Overcoming language barriers can help us achieve less biased knowledge and enhance the application of science globally."