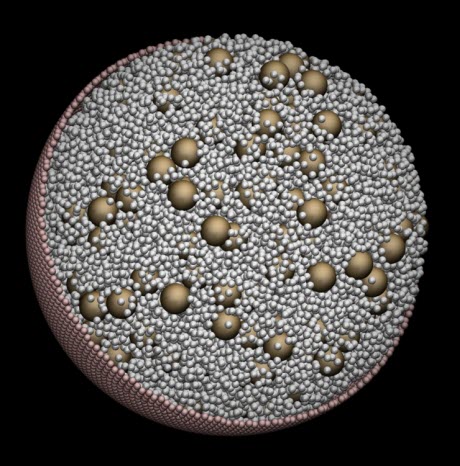 This cellular simulation shows a system of large and small model proteins confined within a spherical membrane. The simulation was done by researchers Edmond Chow and Jeffrey Skolnick at the Georgia Institute of Technology.Image credit: Edmond ChowUsing large-scale computer modeling, researchers have shown the effects of confinement on macromolecules inside cells–and taken the first steps toward simulating a living cell, a capability that could allow them to ask “what-if” questions impossible to ask in real organisms.

The work could help scientists better understand signaling between cells, and provide insights for designing new classes of therapeutics. For instance, the simulations showed that particles within the crowded cells tend to linger near cell walls, while confinement in the viscous liquid inside cells causes particles to move about more slowly than they would in unconfined spaces.

The research is believed to be the first to consider the effects of confinement on intracellular macromolecular dynamics. Supported by the National Science Foundation, the results were reported November 16 in the journal Proceedings of the National Academy of Sciences.

The study is an interdisciplinary collaboration between Edmond Chow, an associate professor in the Georgia Tech School of Computational Science and Engineering, and Jeffrey Skolnick, a professor in the Georgia Tech School of Biology. Their goal is to develop and study models for simulating the motions of molecules inside a cell, and also to develop advanced algorithms and computational techniques for performing large-scale simulations.

“We are setting the stage for what we need to do to simulate a real cell,” said Skolnick. “We would like to put enough of a real cell together to be able to understand all of the cellular biochemical principles of life. That would allow us to ask questions that we can’t ask now.”

Earlier simulations, which produced much less fidelity, had assumed that movement within a cell was the same as movement in an unconfined space.

Skolnick compared the interior of a living cell to a large New Year’s Eve party, perhaps even in Times Square.

“It’s kind of like a crowded party that has big people and little people, snakes – DNA strands – running around, some really large molecules and some very small molecules,” he said. “It’s a very heterogeneous and dense environment with as much as 40 percent of the volume occupied.”

The simulations showed that molecules near the cell walls tend to remain there for extended periods of time, just as a newcomer might be pushed toward the walls of the New Year’s Eve party. Motions of nearby particles also tended to be correlated, and those correlations appeared linked to hydrodynamic forces.

“The lifetimes of these interactions get enhanced, and that is what’s needed there for biological interactions to occur within the cell,” said Skolnick. “This lingering near the wall could be important for understanding other interactions because if there are signaling proteins arriving from other cells, they would associate with those particles first. This could have important consequences for how signals are transduced.”

For particles in the middle of the cell, however, things are different. These molecules interact primarily with nearby molecules, but they still feel the effects of the cell wall, even if it is relatively far away.

“Things move more slowly in the middle of the cell than they would if the cell were infinitely big,” Skolnick said. “This may increase the likelihood of having metabolic fluxes because you have to bring molecules around partners. If they are moving slowly, they have more time to react because intimate interactions by accident are unavoidable.”

While the rate of activity slows quantitatively, qualitatively it is the same kind of motion.

“Slowed motion is a double-edged sword,” Skolnick explained. “If you happen to be nearby, it is likely that you are going to have interactions if you are slower. But if you are not nearby, being slower makes it difficult to be nearby, affecting potential interactions.”

The researchers also compared the activities of systems of particles with different sizes, finding that having particles of different sizes didn’t make an appreciable difference in the overall behavior of the molecules.

While the simulations didn’t include the DNA strands or metabolite particles also found in cells, they did include up to a half-million objects. Using Brownian and Stokesian physics principles, Skolnick and Chow considered what the particles would do within the confined spherical cell a few microns in diameter.

“From the results of the computer simulations, we can measure things that we think might be interesting, such as the diffusion rates near the walls and away from the walls,” said Chow. “We often don’t know what we are looking for until we find something that forces us to ask more questions and analyze more data.”

Such simulations take a lot of computational time, so the algorithms used must be efficient enough to be completed in a reasonable time. The “art” of the algorithms is trading off fidelity with processing time. Even though the simulations were very large, they managed to study the actions of the confined particles for no more than milliseconds.

“Part of the art of this is guessing what will be a reasonable approximation that will mimic the system, but not be so simple to be trivial or too complicated that you can’t take more than a few steps of the simulation,” Chow explained.

Scientists, of course, can study real cells. But the simulation offers something the real thing can’t do: The ability to turn certain forces on or off to isolate the effects of other processes. For instance, in the simulated cell Skolnick and Chow hope to build, they’ll be able to turn on and off the hydrodynamic forces, allowing them to study the importance of these forces to the functioning of real cells.

Results from the simulation can suggest hypotheses to be confirmed or rejected by experiment, which can then lead to further questions and simulations.

“This becomes a tool you can use to understand real cells,” said Chow. “It’s a virtual system, and you can play all the games you want with it.” 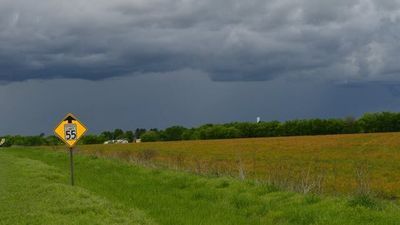 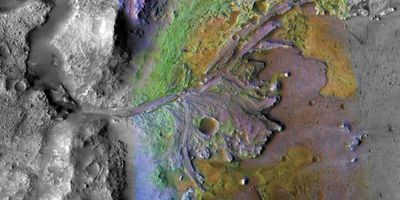 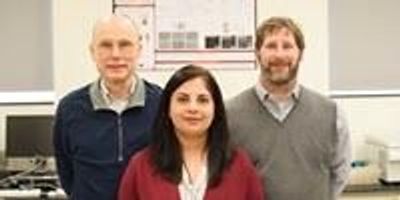 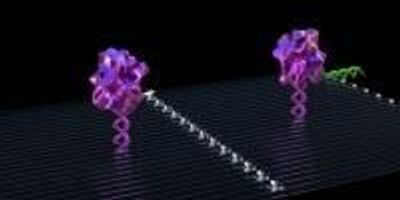