BLOOMINGTON, Ind. -- The indictment of 13 Russians in the operation of a "troll farm" that spread false information related to the 2016 U.S. presidential election has renewed the spotlight on the power of "fake news" to influence public opinion. Now, an Indiana University faculty member who studies the spread of misinformation online is joining prominent legal scholars, social scientists, and researchers in a global "call to action" in the fight against it. 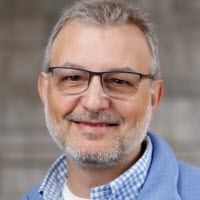 Filippo MenczerPhoto credit: Eric Rudd, IU CommunicationsFilippo Menczer, a professor in the IU School of Informatics, Computing and Engineering, is a co-author of a paper published March 8 in the journal Science that calls for a coordinated investigation into the underlying social, psychological, and technological forces behind fake news. This is necessary to counteract the phenomenon's negative influence on society, the authors said.

"What we want to convey most is that fake news is a real problem, it's a tough problem, and it's a problem that requires serious research to solve," said Menczer, who is also a member of the IU Center for Complex Networks and Systems Research and founder of the IU Observatory on Social Media, a platform that provides tools for identifying automated social media accounts and analyzing the spread of misinformation across social networks.

The paper includes estimates that the number of automated "bots" is 60 million on Facebook and up to 48 million on Twitter, the latter based upon a recent study by Menczer and colleagues. It also cites an analysis that found the average American likely encountered one to three fake news stories in the month before the 2016 U.S. election.

"The spreaders of fake news are using increasingly sophisticated methods," Menczer added. "If we don't have enough quantifiable information about the problem, we'll never be able to design interventions that work. This paper is really a call to groups across the globe—academics, journalists, and private industry—to work together to attack this problem."

This includes the tech companies that create the platforms used to produce and consume information, such as Google, Facebook, and Twitter. The authors said these companies have an "ethical and social responsibility transcending market forces" to contribute to scientific research on fake news.

Additionally, the article's authors point out that false information affects not only the political sphere but also areas not previously regarded as political, such as public health topics like nutrition and vaccinations, as well as the stock market. They also said the problem is particularly intractable because some research has found that repeating a lie to correct it can actually ingrain false information in the mind. 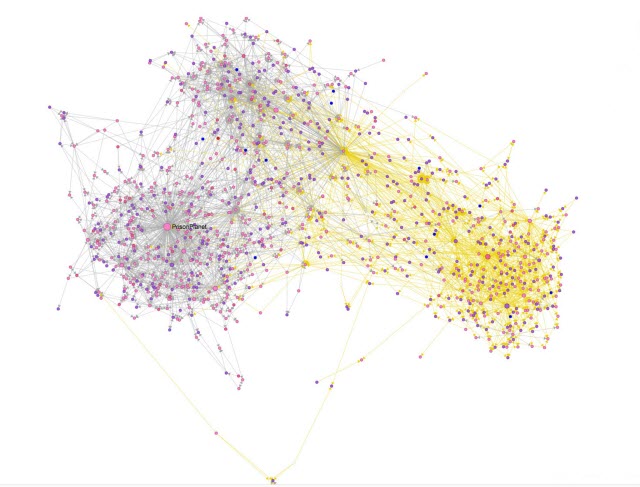 This image shows how an article claiming that 3 million illegal immigrants voted in the 2016 U.S. election spread between users on Twitter. Retweets, replies, and mentions are shown in gray. Darker pink circles are more likely bots. The yellow lines, which do not overlap with many accounts sharing the claim, show the spread of articles fact-checking the story.Image courtesy Filippo Menczer

One solution Menczer and his colleagues propose is rigorous research into the effectiveness of high school courses that help students recognize illegitimate new sources. They also propose specific changes to the powerful algorithms that increasingly control people's access to information online.

"The challenge is there are so many vulnerabilities we don't yet understand and so many different pieces that can break or be gamed or manipulated when it comes to fake news," Menczer said. "It's such a complex problem that it must be attacked from every angle."

Menczer is a prominent voice on the fight against fake news whose research is frequently cited in major media outlets and academic conferences. The essay's co-authors include researchers at high-profile organizations such as Microsoft, Harvard, Yale, and MIT.