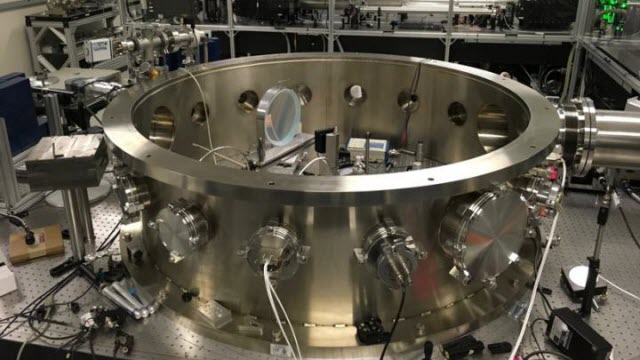 Nuclear fusion, the process that powers our sun, happens when nuclear reactions between light elements produce heavier ones. It's also happening—at a smaller scale—in a Colorado State University laboratory.

Using a compact but powerful laser to heat arrays of ordered nanowires, CSU scientists and collaborators have demonstrated micro-scale nuclear fusion in the lab. They have achieved record-setting efficiency for the generation of neutrons—chargeless sub-atomic particles resulting from the fusion process. Their work is detailed in a paper published in Nature Communications, and is led by Jorge Rocca, university distinguished professor in electrical and computer engineering and physics. The paper's first author is Alden Curtis, a CSU graduate student. 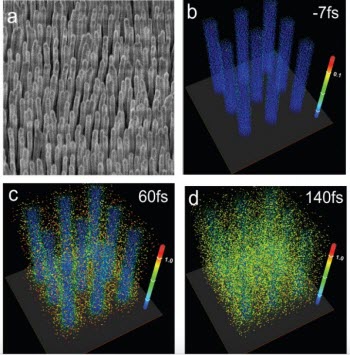 In contrast, Rocca's team of students, research scientists and collaborators, work with an ultra fast, high-powered tabletop laser they built from scratch. They use their fast, pulsed laser to irradiate a target of invisible wires and instantly create extremely hot, dense plasmas—with conditions approaching those inside the sun. These plasmas drive fusion reactions, giving off helium and flashes of energetic neutrons.

In their Nature Communications experiment, the team produced a record number of neutrons per unit of laser energy—about 500 times better than experiments that use conventional flat targets from the same material. Their laser's target was an array of nanowires made out of a material called deuterated polyethylene. The material is similar to the widely used polyethylene plastic, but its common hydrogen atoms are substituted by deuterium, a heavier kind of hydrogen atom.

The efforts were supported by intensive computer simulations conducted at the University of Dusseldorf (Germany), and at CSU.

Making fusion neutrons efficiently, at a small scale, could lead to advances in neutron-based imaging, and neutron probes to gain insight on the structure and properties of materials. The results also contribute to understanding interactions of ultra-intense laser light with matter.