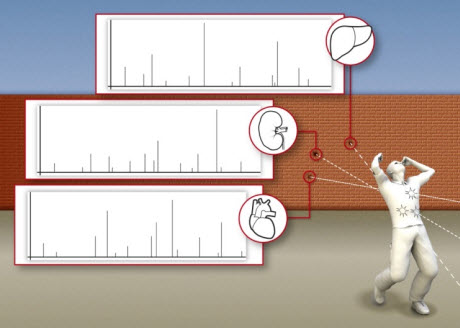 Forensic proteome analysis: Protein signatures allow experts to match wounds to bullet holes.Image credit: Journal of Proteome ResearchTübingen University researchers have developed a method which enables them to more accurately reconstruct crimes involving sharp blades or firearms. An interdisciplinary team from the Center for Bioinformatics Tübingen (ZBIT), Forensic Medicine, the Center for Quantitative Biology (QBiC) and bioanalysts from the Research Center for Ophthalmology (FIA) used traces of organic material found on bullets or other weapons used in crimes. Their findings are published in the latest edition of Journal of Proteome Research.

Forensic medicine has long employed molecular biology to link, for instance, tiny amounts of organic material to a suspect.  Yet such methods are less useful when it comes to finding out which shot or stab wound was the cause of death. They enable a weapon to be linked to the victim, but not the projectile to the wound. This is sometimes necessary for the full reconstruction of a crime and presentation of evidence–for example, in cases where several people were involved in a shoot-out.

The study’s lead authors Dr. Sascha Dammeier (FIA), Dr. Sven Nahnsen (QBiC) and Johannes Veit (ZBIT), used proteome analysis–which is based on mass spectrometry–to demonstrate that projectiles which have been fired through vital organs bear traces of organ-specific proteins. These protein “signatures” allow experts to identify which organ the projectile passed through–and even match a bullet to the wound it caused.

The researchers initially tested the process on isolated cattle organs, which have typical protein patterns which can be statistically classified. Then the bullet metal was tested for relevant parameters.

After experiments showed that a majority of the protein signatures were clearly in evidence, the method was put to the test in a real murder case. Unfortunately, the purely bioinformatical classification yielded no clear result due to contaminants. Yet the identification of organ-specific proteins on several projectiles enabled forensic scientists to match all wounds to projectiles using a process of elimination. And this led to a complete reconstruction of the crime.

The method has been patented and licenced. The Tübingen researchers hope that it will be widely used to compile a forensic database which will successively make the protein signatures of all important organs–and their combinations–available to forensic experts, so that the signatures can be quickly and effectively identified.